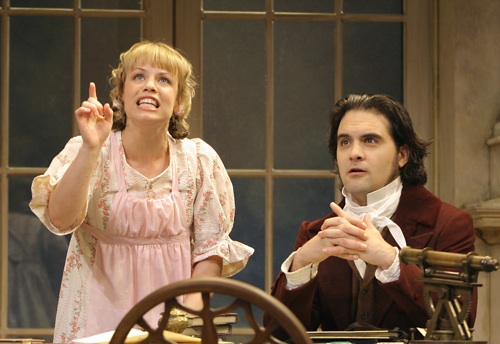 Entrancing. Captivating. Charming. Search as I might in my mental dictionary, the attempt is futile: none of these words can adequately capture Tom Stoppard’s Arcadia as presented by the Folger Theatre Consort. The play takes place in an English country house, oscillating between two centuries as characters try to reconcile past and present.  They grapple with the Big Questions as well as the mundane with comedy and humanity in their quest to better understand the world around them and themselves.

Hannah Jarvis (played by Holly Twyford) and Bernard Nightingale (Eric Hissom) are literary academics focused on Lord Byron. They’ve both come to Sidley Park to conduct research on their next respective big scholarly breaks. They’re staying with the Coverlys, a landed family whose ancestors hold the keys to both Bernard’s and Hannah’s research. We watch the story of those ancestors as well: the young genius Thomasina Coverly (Erin Weaver), her tutor Septimus Hodge (Cody Nickell) and his always off-stage friend Lord Byron. Those of 1809 Sidley Park are perched at the brink of the monumental thought change which brought the Romantic Period after the rational age of Enlightenment. That shift meant as much to those who study it as it did to those who lived it, as the play reveals.

All of the main characters are enacted in a way that makes them warm, real and relatable– you get a strong sense of who they are through their very natural-seeming  interactions with one another. Even the stuffy, arrogant, English professor Bernard (oh, you know the type) becomes someone you wouldn’t mind being around a bit longer. There was one single set, but it was gorgeous and the objects within were used effectively to better connect the two periods in time.

It may strike you as odd that the Folger Theatre would present Arcadia, a contemporary play not written by Shakespeare. Thinking back through the play, however, and considering its language, subtleties and themes, Arcadia is undoubtedly Shakespearean. In Arcadia, Stoppard nimbly sounds many different registers, similar to a Shakespeare comedy. There are deep considerations– of the laws of thermodynamics, of Newton, of poetry–immediately followed by or interspersed among sex jokes, cuckoldry and unabashed cussing. Why, you might ask, is this a good thing? Because literature and drama should set their sights on portraying life and its truths and in life separate realms of low-brow and high-brow don’t exist, or if they do, the distinction is highly arbitrary. 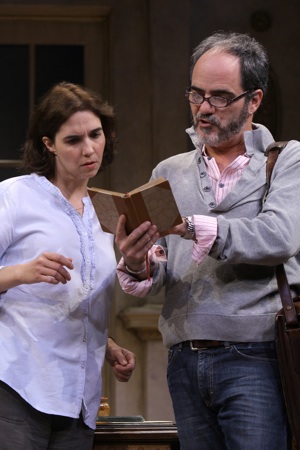 Arcadia is often cited as Tom Stoppard‘s greatest work to date. Stoppard is probably best known for his play Rosencrantz and Guildenstern are Dead, which tells the story of the two minor characters (“the most expendable people of all time,” in Stoppard’s words) from Shakespeare’s Hamlet.  He has had immense success both commercially and critically and is widely recognized as one of the greatest contemporary English playrights.

I often find myself thinking with Folger events that it may be that I am their perfect audience member. Indeed, I found that Arcadia (classically synonymous with Utopia) hit pretty much all of my favorite topics; It may very well be that a theater-goer disinterested in poetry, literature, mathematics, time, Romanticism and Victorian novels might be less enthralled. But I really believe Arcadia was more than the sum of its subjects. It’s wit and comedy weren’t married to its intelligence and its characters cared about the resolution of its inherent mystery enough to keep a viewer’s attention even if they couldn’t care less who walks in beauty like the night. “What it all means” is a topic that involves us all, and if that fails, at least theirs the question of carnal embrace.

One thought on “We Love Arts: Arcadia”