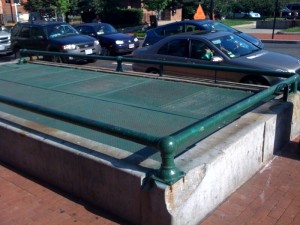 The Dupont station isn’t the only thing that’s left from Washington’s streetcar era.  There are still streetcar tracks visible in Georgetown, and there are tracks underneath the asphalt in Adams Morgan.  And of course there are the car barns in Capitol Hill and Georgetown and Navy Yard and 16th Street Heights that have been preserved and reused.  Pepcogot its start as a subsidiary to a streetcar company back in the 1900s.  And some of today’s Metrobus lines still run along old streetcar routes.

For those of you who love history and transit as much as I do, I’d recommend checking out the National Capital Trolley Museum out in Maryland (streetcar rides!  yeah!).  However, the museum’s operations are suspended until later this fall due to a relocation because of the ICC (once again, car infrastructure outweighs transit).  The museum will be open for one day only on July 19, so mark your calendars to schedule a visit then.

This isn’t the end of the line (ha!) for streetcars in DC though.  DDOT is working (slowly) to bring a streetcar system back to the city, with one line along H Street NE and one line through Anacostia.  There are still a lot of questions remaining about whether those are the best alignments for the streetcar, and how exactly a streetcar system will be built in the historic downtown, where Congress has imposed a ban on overhead wires.

That’s the short story on the history and future of streetcars in DC.  Once you realize what you’re looking for, you’ll be surprised how many elements of the old streetcar network are still around.  I couldn’t figure out what those Dupont entrances were initially, and I never knew that so many old streetcar barns have been reused as schools and housing and shopping centers across the country.  But while we may no longer have the streetcar lines running through the city,  the vibrant, pedestrian-friendly nature of many DC neighborhoods is due to the old system.