Harry Potter fans, close your eyes and think of “The Half-Blood Prince” — the sixth book in the series, the movie of which will open in just a few short days. What image do you see? What color? Chances are, the answer is an amalgum of green and yellows, with the faces of Harry and Dumbledore as imagined and drawn by the hand of Mary GrandPré, the American illustrator of the series.

While GrandPré is best known for her work on the series, she has an extensive body of work beyond the realm of Hogwarts and Horcruxes, including many children’s story books. She will be discussing her career at the Corcoran Museum on Monday, July 13 in a talk entitled “Creating Characters: An Illustrative Evening.” WeLoveDC’s Acacia O’Connor had the opportunity to chat with GrandPré about “King Harry” and what inspires her.

WeLoveDC: Tell me a little bit about the upcoming lecture and presentation.

Mary GrandPré: Well, most people know me as the Harry Potter illustrator, so I’m going to show some slides on the work I’ve done on that, and some of the work behind the scenes that people don’t see.  Also a new collection of pieces that are editorial and other works. I’ve been an illustrator for 25 years now so I have quite a variety of things to show.

So you’ve been to DC before? What were your impressions?

I really enjoyed (DC). I know it’s changed now but it seemed like it’s really efficient, it’s beautiful, good food, good art. I just thought it was a great town, I think it still is.

When you get a cover assignment – where do you begin?

I go through the manuscript at least 2 or 3 times, I read it with a fine-toothed comb. I actually have this system where I highlight characters in one color descriptions and events in another color, I’ll highlight little descriptions that are important — anything thats a clue for me to making a complete cover.

I’ll give them three or four cover ideas and the art director and editor kind of put their heads together and I think J.K. Rowling looks at them too, but I’ve never been in contact with her. Most of the time goes into reading the book a couple of times and pulling out the information and pulling out a concept and the final execution isn’t as time heavy as the other parts.

What are your thoughts, when you’re working, on how your illustration will impact the imagination of your readers?

I see it as my responsibility to stay really close in the way that I portray things to the way the author is describing it. Tha’s my goal, to be true to the writing but to bring my own insight and my own vision to it and there’s always that hope, anytime that we bring a character to life in a visual sense, that the viewer will embrace it as part of their vision too.

When I do the Harry Potter books it’s so highly scrutinized and its put under the magnifying glass by every kid and adult who is a fan — and understandably so.

When I read the books I try to pay attention to every detail, I’ve learned that lesson.  I was speaking at a school once, and I had a magazine cover I’d done of Harry, with Harry flying a broomstick, one of the kids asked me “why did you give Harry blue eyes? Harry’s eyes are green.” It was one of those details that just slipped.  It’s a strong fanbase you probably have a little less freedom because of that and you probably need to be more in tune with the exact writing.

Have you ever had any drama surrounding advanced copies of the manuscripts – how did the manuscript process work with such highly anticipated books?

It was always pretty dramatic.  I had to have a safe in my house to put my script it, I had to sign papers to say I wouldn’t share it with anyone.  I couldnt tell people I had the script, it seemed like there were always leaks, and it was never on my end so I was proud of that. I had to drop everything and get to work because the deadlines were so horrendous. It was like Harry the King was coming and if I had other work I had to put it down.

How steep were the deadlines?

I’d have about a week and a half 2 weeks to get back to David Saylor (the art director) with the sketches. I guess from the preliminary sketches to the final it was probably a month and a half to two months. Did you have any input into the film versions of the HP series at all?

Warner Bros bought the rights of all the artwork I’ve done for Scholastic, you know.  They own all the artwork, I can’t even do a sketch of Harry anymore. They contacted me to do a style guide that they could have their artists use when they draw Harry for diferent posters and whatnot. I thought about it for awhile and I decided I didn’t want to do that because it was such a huge undertaking and i didn’t want to commit that much of my time to that project. Later on they asked me to create various scenes for them. They wanted to have Harry Potter artwork to sell to their licenses for posters and calendars or use for anything you could imagine.

I imagine you’re a little tired by now of hearing about Harry Potter.

I’m kind of just used to it. I know it’s part of my identity now whether i like it or not. (laughs)

It’s exciting and it’s a great opportunity but it’s also not creatively what drives me and moves me and inspires me the most. I’m most excited about my own personal painting… (I’m driven to) express my owndreams and my own visions that I have total freedom to interpret, and I can change my mind in the middle of the painting. That is the most exciting thing to me what can happen on canvas when there aren’t any rules. There’s no deadlines and I dont get to do that if I have to make a living, you know. I’m not rich afer Harry Potter – I didn’t get royalties – I’m working like everybody else.

You’ve described your style as being “light-hearted” and “whimsical” — how have you approached the darkening tone of the books over time?

Part of the challenge for me is to continually age Harry another year, as well as the other characters, but to make them all consistent. Throughout the series the writing became more and more…almost mature, it grew more into an all-around book for everybody and I think my artwork went in the same direction. It started out as being light-hearted but as Harry went through changes I think my portrayal changed in the same way, and was more based in reality.

There’s a lot of stuff  in the latter books that just speaks to just growing up and emotional issues. I think I just started to take the whole thing a little more seriously too – I think my favorite cover is the last one, I think its the most dramatic. 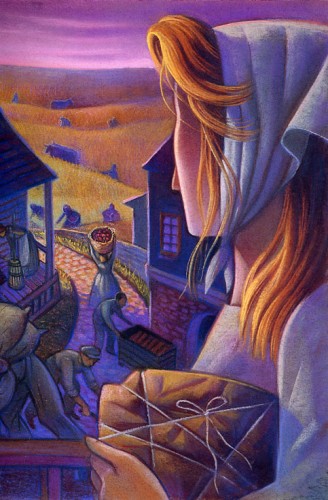 Your work has a sometimes angular, almost cubistic quality… who are your inspirations?

I think they started out being more like Henry Moore, somewhat Edward Hopper, you know, with the half-told stories where you can see parts of a piece of life and you wonder what the rest of it is. Lately I’ve gotten more into (modernist painter Marc) Chagall and that type of freedom and dream-like quality. I’m looking more at abstract artists for the freedom and the color and try to bring that to my painting now.

I think the fact that I’m appreciating abstract artists more stems from the fact that I’ve been taking art direction for so long in my life. It’s like “I just want to paint shape and color! Everyone be quiet now!” Just to look at the basics and not worry about whether its “right” or “wrong” and just make it beautiful.

One thought on “Colors and Shapes: An Interview with Harry Potter Illustrator Mary GrandPré”