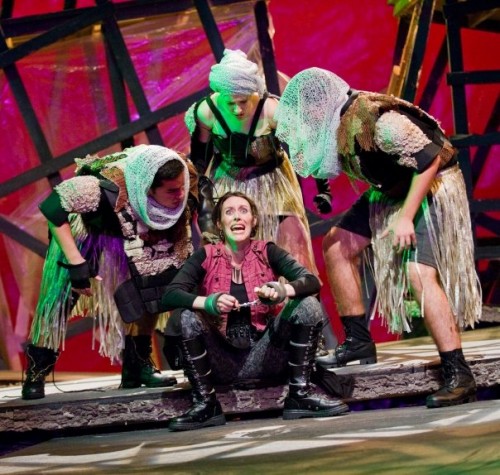 No, really. If there is a pop culture meme that has taken the arts and culture world by the throat in the past eighteen months, its the resurrection (puns absolutely intended) of the Zombie. The New York Times stretched, a bit hilariously, to attribute the rise of the Zombie to the recent economic climate in their review of this year’s hit Pride and Prejudice and Zombies. Just this week it came out that the publisher of that mash-up has signed on for another, Paul is Undead, which will follow the lives of the Beatles as if they were zombies. Typically, in zombie tales small band of humans must rally against Zombie take-over in a world where civilization is crumbling around them and nothing was stable as it once was.

Enter here: “Living Dead in Denmark,” or as we called it, Hamlet and Zombies. This Rorschach Theater production, currently being performed at the Davis Theater in Georgetown, playfully remixes the Bard in a way that is both a thumbs up and a nose-thumbing. Though the play by Vietnamese American playwright Qui Nguyen was first produced in 2006, its debut production in the District is another coup for the current craze. 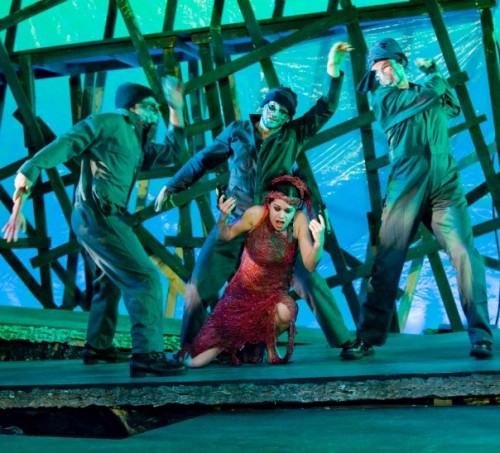 The figurative curtain rises on a spare and bloodied Elsinore upon which our heroine, Ophelia, is being brought back to life by a team of people clad in hazmat suits. Still in shock, she meets up with two more of her kind — Juliet (Megan Reichelt) and Lady M (the ferocious Katie Atkinson) — who, with the help of current leader of the humans Fortinbras (Ben Cunis), lay down what’s going on. Zombies are taking over, eating brains and flesh all over Europe, and they must be stopped. Juliet, Lady M and Ophelia, along with steadfast survivor Horatio, comprise a team of suped-up humans who will stop the Zombie King. Of course, there are collaborative growing pains, as Lady M , looking like a goth G.I. Jane, unleashes her profanity- and venom-laced dialogue in Ophelia’s direction. Juliet, looking like a mash-up of Sailor Moon and Velma from Scooby Doo, complete with geeky specs, gives her best gee-golly attempt as making peace as the three proceed in their mission.

Along the path to the Zombie King there is enough banter, pop culture jokes, awkward romance, geeking out and truly mind-blowing stage fighting choreography to thoroughly entertain. Ophelia turns to the only familiar face, Horatio for comfort, while back at camp Lady M and Juliet are giving into the…tensions between them (plenty of Brokeback Mountain references follow). Meanwhile, we cut to the Zombie King,  the new “Ghost” of Elsinore, as he attempts to rally his Council to capture the Girl-Squad and defeat the humans. His council is, naturally, comprised of Shakespearean magical folk: A Midsummer Night’s Dream’s Titania and Robin Goodfellow, Macbeth’s Weird Sisters and the perennially misunderstood island beast Caliban of The Tempest. Robin Goodfellow’s character (Sara Taurchini) may have been my favorite part of this production — the crude and playful spirit is maintained with a thugged-out Lady Sovereign exterior, yo.

The Zombie King’s plotting comes to a head when he encounter’s Horatio, and reveals his true identity. This is where the moral black-and-whites of the Zombie-Human battle begin to get muddled and Ophelia, now confused but ever-determined, is betrayed by one of her own. Big questions come to the forefront — whose genocide is more just? The Zombies want everyone to live forever, the humans want to end all their “unnatural” lives. The plot twists flanked by even more badass fight scenes. I can’t even fathom how long it must have taken the actors to get the fight choreography down, but it looks effortless. Even now, in a time where we’re trained to expect computer-simulated and enhanced combat, violence and explosions, these ass-kickings were just damn good entertainment. 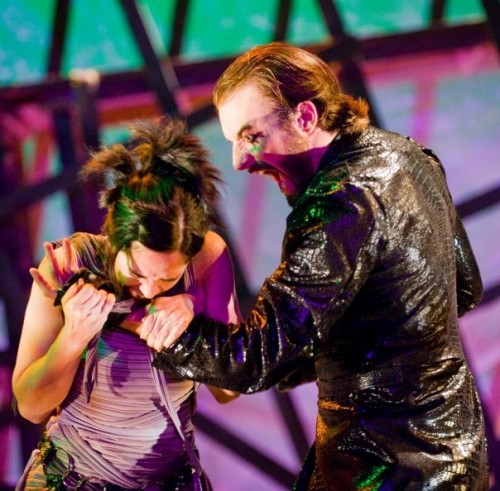 Some of the most shining moments in this play were when it veered off in completely ridiculous directions, i.e. expository à  la James Bond, Ophelia dear-diary voiceover set to the themesong from Doogie Howser, sad harmonizing from the three-man beast Caliban. The folks at Rorchach know what entertains, and Living Dead in Denmark throws it all together in a very enjoyable hodge-podge.

Living Dead in Denmark is playing Sunday evenings through August 23 at the Gonda Theater on the Geogetown campus. Tickets are $21.50 with discounted tickets available for students, seniors and groups.

One thought on “We Love Arts: Living Dead in Denmark”