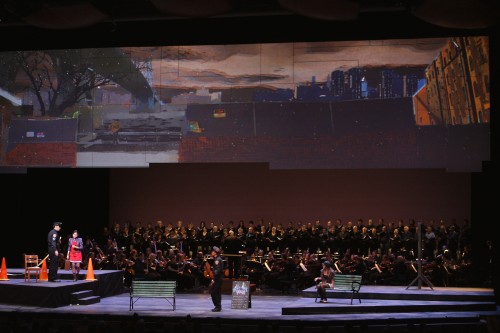 It’s not quite Rent, but its certainly not your grandmother’s Puccini, either. Wolf Trap Opera Company‘s one-night staging of La bohème fell somewhere inbetween classical and modern — with the occasional wink at the post-modern — with its multi-media presentation of the opera set in Brooklyn, NY. Director Kevin Newbury’s treatment of Puccini’s immensely popular work was supported by the once-again impressive cast of Filene Young Artists.

La bohème is an opera of character more so than plot — most of its action takes place in the hearts of its bohemian protagonists as they fumble through their relationships with one another. What is striking is just how easily the lyrics of the Italian libretto translates to 2009. All the qualities which, when modernised, become idiosyncratic can be easily explained away by Williamsburg hipster irony. Marcello, the artist, is painting a picture of the Red Sea? But of course. Mimi embroiders silk flowers? Totally. Their apartment is heated by a small stove? Clearly. 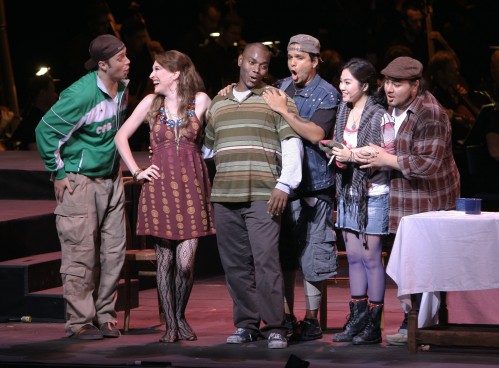 Newbury asserts in his director’s notes that he has spent a lot of time in Williamsburg and other Brooklyn neighborhoods, but I couldn’t help but wonder if his costume designer had. About half my friends live in Brooklyn, and I can’t imagine anyone there dressing like Schaunard (Matthew Hanscom), who looks more like a Duke student in his jerseys, backwards hat and cargo khakis. Colline (Carlos Monzon) also reps the fratty backwards hat paired with an entirely serious, sleeveless, studded jean jacket. (This becomes more comedic, however, when it is this very garment Colline laments parting with in Act IV.) Rodolfo, Mimi and Musetta hit closer to the mark with scarves, leggings and plaid, but leave me still wondering, whither the absent fay-bans and American Apparel tees?

Edgier is the overhead animated video display which sets the scene throughout the performance. The pieced-together projection screen spans the length of the stage and is illuminated by graphic-novel-esque panorama of the inside of the characters apartment, the Brooklyn bridge and their local hangout. The multimedia component worked well, visually it was reminiscent of a certain vein of anime illustration. (See: Flobots video or Kill Bill) 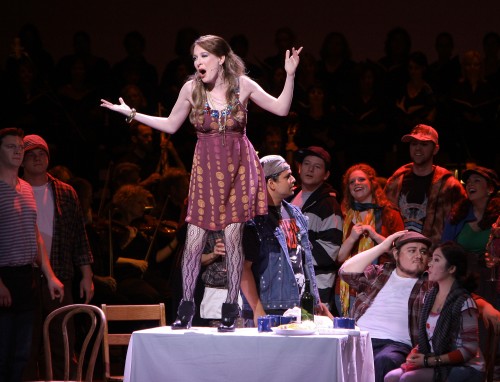 Enough about the visuals — the operatic voices, chorus and orchestra rendered them practically besides the point. I was thrilled to see Diego Torre, who stole the show in the almost extraneous role of Iro in Ulysses last month, was at the heart of this show as Rodolfo. Hana Park captivated as the ailing and detached Mimi. The other pair of entangled lovers, Musetta (Ava Pine) and Marcello (Daniel Billings) tormented one another even as they engaged the audience at the Filene Center. Taken altogether, the cast formed a cohesive group, equal parts silly and earnest, relatable rather than distant.

Though earnestness is a quality eschewed by my generation, Rodolfo and Mimi’s tragic love story somehow transcended that breed of romance that seems to us hokey and lame. Maybe it was the haze of inevitable which colored Mimi’s every note and cough that made it easy to let go. We can accept their antiquated devotion because it is destined to end.

It was here that the Wolf Trap Opera season was destined to end as well — and on such a beautiful night. Alongside the orchestra, crickets and cicadas added final chords. An uncharacteristically cool summer breeze ushered out the crowd of opera-goers old and young and very young, but not before several rounds of standing applause and repeated calls: “Bravo! Bravi!”