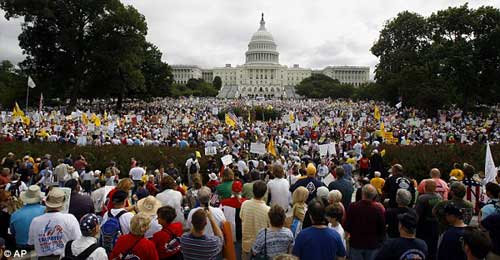 But that’s a wide angle shot from right behind the hedges by the Grant Memorial, much closer to the Capitol than the depth of field makes it appear. Let’s pull back a bit farther, past Grant Memorial, the Capitol Reflecting Pool, and 3rd Street, to the National Mall itself:

Not much going on in that afternoon photo, despite some protestors’ claims that the National Mall was solid with people up to the Washington Monument. In truth, the FreedomWorks event had permits only for the Capitol Grounds and not for the National Mall, prompting speakers to urge those in attendance to pull in closer to the Capitol, an announcement which at one point led to some grumbling.

Before arrival at the Capitol the real bulk of the crowd was contained in the march down Pennsylvania Ave NW, which filled up the avenue and lasted three hours, captured in this timelapse taken from an overlooking building:

Based on the density and duration of the march, rally organizers’ and supporters’ estimates range anywhere from “hundreds of thousands” range to about 1.5 million — but Penn Ave NW is much narrower than the National Mall, and fills up with people a lot faster, even for smaller marches. (This hasn’t stopped supporters from claiming that this narrow view of the march is proof that the crowd extended to the Washington Monument, even though the camera was closer to Freedom Plaza.)

Going back to the National Mall, here are two past DC rallies: the 1995 Million Man March, for which the NPS lowball estimate was in the 400,000s, and higher estimates went to 850,000:

And an aerial shot of the 1997 Promise Keepers march, for which estimates run from 500,000 to a million: 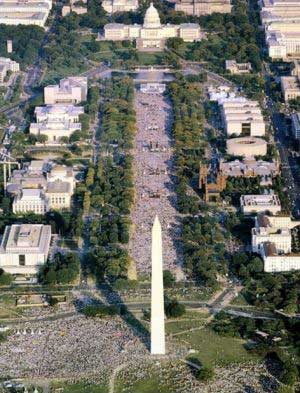 The Million Man March clearly extends well past the National Gallery of Art’s West Wing, and the Promise Keepers easily stretch from Capitol to Washington Monument. (Coincidentally, the aerial view of the Promise Keepers event continues to be passed around by somewhat more credulous linkers as being of the 9/12 rally, despite the clear absence of the Smithsonian National Museum of the American Indian, and the older configuration of paths around the Washington Monument.)

Now, here’s the crowd at the Obama inauguration in January, an event which NPS estimated had 1.2 million to 1.8 million in attendance: 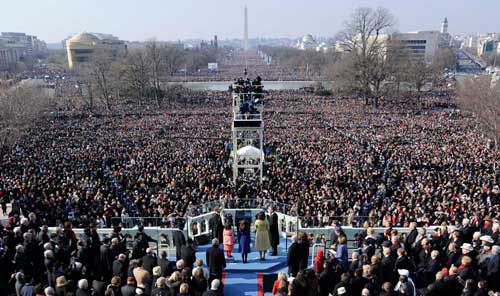 For comparison, here’s a photo of the 9/12 rally at its peak, taken more or less from the same vantage point as the inaugural photo above, the Upper Terrace of the Capitol looking west towards the Monument: Lots of people gathered on the Capitol lawn, around the Reflecting Pool, and reaching a few blocks down Penn Ave NW and Maryland Ave SW. Farther down the grassy Mall you can see the crowd thin out, well before reaching the tents of the National Black Family Reunion, on the Monument end of the Mall.

David Shuster tweeted his estimate that the rally had under 50,000 people, since the crowd didn’t go past 3rd Street, but considering that they had to pack in on the Capitol Grounds to keep from overflowing too much onto the Mall, and Penn Ave NW was clogged for up to a good three hours, I think the upper reaches of the DCFD’s 70,000 esimate are good; if the grounds around the US Botanic gardens, Senate Parking Garage Fountain, and Constitution and Independence avenues were packed, too, maybe even up to 100,000 is possible — a significant number.

Matt Kibbe of FreedomWorks has since apologized for misrepresenting the “two million” crowd estimate as having come from ABC News, and the official FreedomWorks recap says “hundreds of thousands,” which is a reasonable statement if they got up to 100,000. This, of course, hasn’t stopped 9/12 rally supporters from continuing to insist on two million, or even “2 to 3 million.”

As a useful visualization tool, Philip Bump of Mediaite depicts the difference in rally crowd estimates in terms of pixels.