You won’t believe me, but triathlons are ridiculously fun.  Swimming, biking, and running back to back to back for 32 miles sounds exhausting and painful to the uninitiated, but yesterday at the Nation’s Triathlon I had the time of my life.  And let’s put this in perspective, a year ago I could barely run a mile.  But with the great resources that our city has to offer, from free pools, great biking trails and an active triathlon community, DC has made a triathlete out of me.

The Nation’s Tri, which marked its fourth year yesterday, was a fantastic event from start to finish.  It has grown from 500 competitors in its first year to 6,000 registered competitors today, and it’s easy to see why: it’s professionally managed, takes you through some of the most beautiful parts of the city, and well, where else can you swim the Potomac with the mayor? ‘If everyone else jumped in the river . . .’
courtesy of ‘Blacknell’

First, a little background on triathlons.  They involve three events, always in the swim/bike/run order.  The competition begins in the water, with age/gender groups released in timed heats (there were three different groups of about 120 people each in my division, F25-29).  After the swim, you run to the transition area, where you have meticulously laid out your bike equipment (bike shoes, helmet, etc), running necessities (socks, shoes), and a bunch of other supplies like towels, water, and electrolytes. You’re timed from start to finish, and your splits are tracked by an RFID race chip on your ankle: a swim time, a T1 or transition 1 time (which is from when you leave the water to when you leave the transition area with your bike), a bike time, a T2 time (from when you return with your bike to when you leave the transition area with your running stuff), and a run time. The Nation’s Triathlon course involved a 1.5K (0.93 mile) swim in the Potomac River, from Potomac Park around the Memorial Bridge and back.  I know what you’re thinking, and no– after the swim, I don’t have any weird growths or unexplained illnesses.  It was actually pretty pleasant, and the mouthfuls of water I got tasted as normal as DC tap water.  Most people used wetsuits for buoyancy (I was lucky enough to rent a wetsuit last minute), and the water was very calm.  I got kicked in the face a couple times, but that’s part of the triathlon experience! 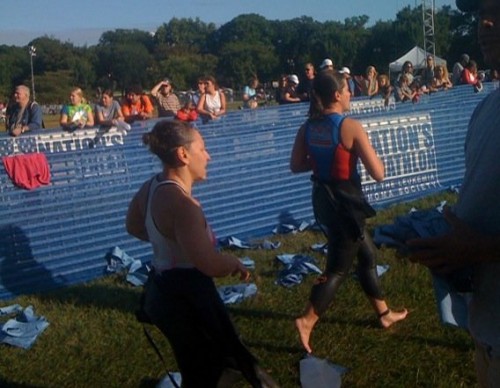 That's me in the red and blue, running from the Potomac to my bike

The bike section was beautiful.  The 40K (24.8 mile) course took us up Rock Creek Park a bit, back down to Georgetown, then out the Clara Barton Parkway to Glen Echo.  It was pretty flat and fast, with just a minor hill and a few hard bumps.  Biking on highways sure makes you realize how many potholes are on the city’s roads and how badly some of these roads need repairs.  Generally the course was fast but crowded, which led to a few downed cyclists. 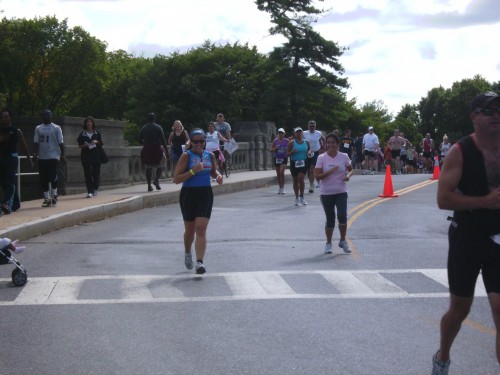 I'm so close to the finish line!

Then came the run.  By this point, you’ve been exerting yourself for two hours and feel terrible, and after the bike your legs feel like jello.  The 10K (6.2 mile) run at the Nation’s Tri took us around Hains Point and  the Tidal Basin, past the Jefferson Memorial, then to a finish line back at a very packed and wild Potomac Park.  By the time the run came around, I just wanted the triathlon to be over– but the cheerful volunteers at the water stations and the energetic crowd made it pass pretty quickly. The volunteers were professional and very helpful– you can imagine that managing 6,000 Type-A triathletes would be impossible without the help of these wonderful people who willingly gave up their Sunday mornings to watch me try to drown, wreck and injure myself.  There was great energy from the crowd as well, with lots of signs and cowbells and enthusiasm.  The Nation’s Tri is an Olympic distance triathlon, and it attracted seasoned veterans from around the world as well as first-time triathletes training with programs like Team in Training.

The best part of the day for me (aside from crossing the finish line) came after the triathlon.  My boyfriend and I were wandering around Adams Morgan Day wearing our Nation’s Tri shirts, and bumped into Mayor Fenty.  We compared race experiences, and he even took a picture with us (after learning that we didn’t beat his time).  It’s very cool to have a mayor who is so involved in local events and has a strong focus on health and fitness in the District. 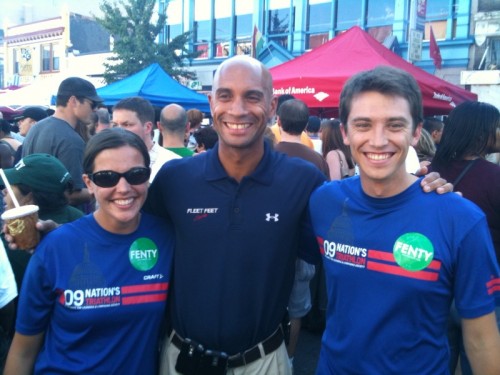 Overall, I had a great time at the Nation’s Tri and would recommend it to anyone.  I made the decision to try an Olympic-distance triathlon this past winter, after becoming bored with longer and longer runs.  But like I said earlier, I’m by no means a serious athlete– I just started running a year ago.  While training for the tri was pretty time consuming (we’re talking 5-6 workouts per week), you don’t need to be a strong swimmer, biker, or runner to start with. There are a lot of great resources in the city that have triathlon training programs (such as the DC Tri Club or the National Capital Triathlon Team), and before you know it, you’ll be addicted too.  I’ve already signed up for next year’s triathlon, so I’ll see you out there.

This feature was co-written with my boyfriend Davis, who with his 2:39 finish time came pretty close to beating Mayor Fenty (2:21).  I finished a little bit later.