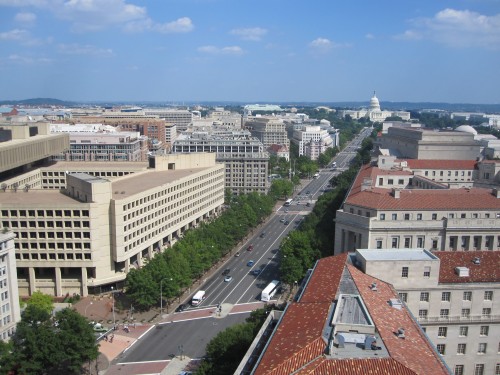 Driving back into the city after a week of being in Upstate New York, I soak in that familiar feeling of relief. Ah, back in the District and thank goodness. No other city can quite shake its tail-feathers like DC at night. You look down the avenues and spy the Capitol Dome illuminated as if to say, “Why would you ever leave this?” Yet DC has a reputation as a city of transience– young people here for their twenties before settling down elsewhere, money changing hands, the powerful commuting back and forth to their districts. There is a cycle of departure. And yours truly, for all I love this city, is no exception it appears. Before leaving for a 9-month adventure in teaching in the Campania region of Italy, I utilized my free time to take care of some unfinished business, what we’re calling the DC Bucket List.

You live here, so why would you spend time waiting in line with Mr. Fannypack and Mrs. Un-ironic White Tennis Sneakers? Well, suck up your pride (yes, we know you work for Rep. So-and-So, you’re very busy and important) and hit some of the hot spots now that the tour tide has died down. If not now, when? Museums Big and Small
Like many who move to DC, the National Mall was the aspect of the city I was most familiar with. As a kid, I had visited with my family, which exposed me to the big sights as well as caused a particular fear of Abraham Lincoln, whose ghost I was convinced haunted the monument. Still, walking through the Air and Space Museum as an adult inspired a different sort of awe, especially since I had never flown in anything at the age of 8. Also, at that age, I think the lesson that airline stewardesses were legally required to be model-pretty, 5’4″ and less than 130 lbs (proportionate!) was lost on me. It intrigued me to read that the government established Air Mail as a testing ground for broader use of air transportation. What a romantic notion– a dashing aviator with his flight goggles pushing a hefty bag of personal correspondence off the wing of his bi-plane!

Before Air Mail, of course, there was Railroad Post and pack mules, as I learned at the Postal Museum. I’m not sure how I never made it here before, as I was once an amateur philatelist and it’s roughly a mile from my house, but no matter. The Postal Museum is a really interestingly designed learning museum, with many multimedia facets and a full-size postal rail car.

I took my brother’s visit as an excuse to check out Ford’s Theater, which absolutely rivals the Monticello visitor’s center for coolest presidential museum. In the theater basement, the exhibits are displayed more like a movie set. You can get the basics passively from several audio/videos or you can delve deeper with information on many of Lincoln’s detractors. In the hallway leading to the theater itself were placards describing, hour-by-hour the days of Lincoln and John Wilkes Booth on April 14, 1865 as the sound of a clock ticking plays. The theater is opening its 2009-2010 season next weekend with Black Pearl Sings. Panorama
Remember earlier this week when the National Monument elevator broke down? Well, it did. That happened to be the day I was on my way to climb the damn thing. No matter — near by was the Old Post Office Building, a maligned monument that boasts a food court, tacky tourist shopping and, more importantly, one of the highest towers in the city. If you make it through the semi-terrifying ride up the rickety elevator, you’ll find yourself atop the building’s bell tower and with a sweet view of the town (see opening photo).

Across the River
Old Town Alexandria is flipping adorable, and it only took me 15 months to find out. I spent an afternoon and some of my hard-earned dollars wandering through Old Town‘s streets and sitting by the riverside. Funky shops, a bevvy of restaurants and historic sites pepper the streets of Old Town, which claims to have been named after landowner Mr. John Alexander. One question, Mr. Alexander – really?? You don’t think any of us have heard of another coastal town and port named Alexandria? I’m just saying, I’m on to you. And the more banal…
It’s true, I did not spend the entirety of my last weeks in the city soaking up its high cultural goodness alone. I also made my first trip to the Nissan Pavillion for some more…shall we say…margaritafied entertainment. That’s right, I went to the labor day Joe Biden concert! I mean – Jimmy Buffett Concert! No, but really, has no one else noticed this? Let me tell you, being among thousands of hoopdee white people Parrotheads singing along to all the words of Fins to the Left is an experience I could not forget for a long, long time, even if I tried. It was awesome.

I also completed a monumental Olympic DC event. No, not the National Triathlon–I’m talking about the more storied Burrito Tour of DC. I have consumed roughly 10 burritos in the past 20 days, half of which were handcrafted by Pedro and Vinny’s at 15th and K. I swear, there is crack in that Mango Habenero. While Well-Dressed Burrito has the super secret factor and Tortilla Coast packs the beef, there’s nothing like being told to take the afternoon off by the burrito cart driver.

Thanks DC, for all the funtimes. Y’all are the best. Feel free to follow my Italian adventures, and remember, it’s arrivederci – not goodbye.