So, you may have heard that DC has more unmarried people than any other state in the country, by a lot! The Pew Research Center released a report showing the the District, when compared to states, comes in a distant last in percentage of people married, and first in oldest median age of residents at first marriage (check out all the pretty graphs here). DC is even out of the range of colors that are shown on the graphs because it’s so different.

This led the Washington City Paper and Newsweek to jump to various conclusions: that DC is home to educated lefties who wait to get married, that the illegality of gay marriage means that that population is undercounted, etc. All valid points, but then Newsweek takes it further and starts talking about the informal apartheid system we have here in DC, where only rich white people live in NW, and all the other quadrants house a “massive underclass”. Umm, have you ever been to Capitol Hill?

The craziest part of all of this is that all of these journalists never took the simple step of looking up comparable cities to get an idea of whether it was really fair to compare an all-urban city to a state. Well, I did.

It turns out that DC isn’t so vastly different than other cities. Take, for example, the percentage of men over the age of 15 who are married, which was just tabulated through the 2008 American Community Survey. 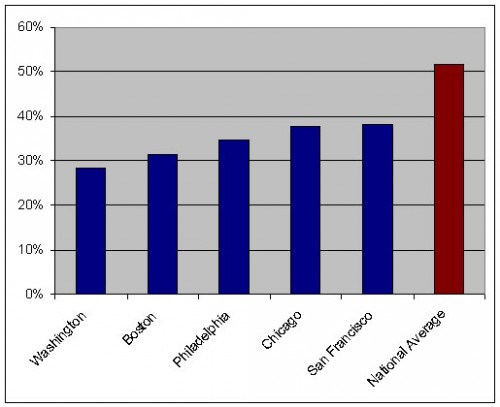 Hey look! DC is low, but not at the extraordinarily low rate that Newsweek is freaking out over. Most peer cities are in the 30-40% range, not even close to the next lowest state of Alaska at 47%. It turns out that cities in general have lower marriage rates, a fact that Newsweek glosses over and the City Paper doesn’t mention at all. Next time you’re going to make inferences about how a city’s race and class politics relate to a study about marriage rates, I’d recommend doing a little research at the Census website.

4 thoughts on “Counting DC as a State Makes an Ass out of You and Me (Actually, Just You)”