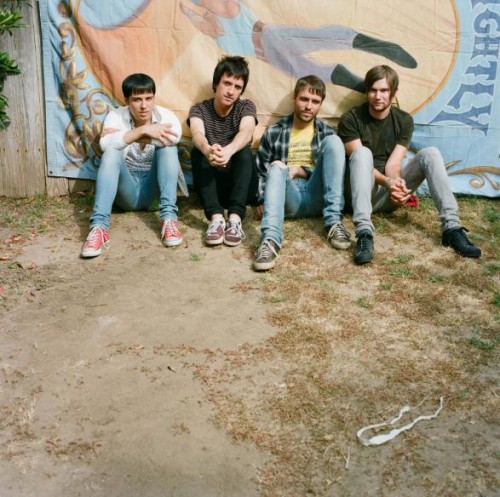 courtesy of The Cribs.

The Cribs treated DC to a fantastic evening of guitar-driven Brit-pop at the 9:30 Club on Tuesday night. Sporting their new 4-man line-up (now including pop-guitar legend Johnny Marr) The Cribs impressed and entertained the crowd of die-hard fans with a set heavily featuring material from their two most recent (and best) albums. While they did not stray very far from their musical comfort zone, the band did put on a dazzling display of their strengths that made for one of the most fun shows I have seen hit DC in quite some time.

I have enjoyed listening to The Cribs mature as a band over their four albums but never had the opportunity to see them live until now. Traditionally a trio of brothers (twin front men Gary & Ryan, and little brother Ross), The Cribs were one of many in the crop of new Brit-pop acts to emerge in the middle-00’s. Other than producing a handful of catchy tunes, I thought their first two albums did very little to distinguish themselves from the near-overload of quality bands coming over from the UK at the time. It was with their near-perfect third album, “Men’s Needs, Women’s Needs, Whatever”, that The Cribs finally made an impact on me. On “Men’s…” the trio raised their game in every department, crafting an awesome guitar-based, bubble-gum pop album that’s up there with some of the best Brit-pop around. Perhaps having taken the trio format as far as they could go artistically, the band wisely added a fourth member for their latest strong offering, “Ignore the Ignorant”.

Johnny Marr, the new Crib, was the elephant in the room before the show began on Tuesday. The man is a legend and you could hear many conversations around the club wondering how his presence would affect the band. Would he overshadow these youngsters with the simple but awe-inspiring fact that he was in Modest Mouse, The Pretenders, The The, and THE freakin’ SMITHS?

It was very funny to me as The Cribs took the stage: three young turks and middle-aged, legendary Johnny Marr. Visually, they were kind of reminiscent of Dave with Alvin & The Chipmunks. Johnny Marr really did seem to overshadow these young guys on stage. That instantly evaporated when The Cribs opened up their set with the pop-assault of “We Were Aborted”. The band sounded great and the brothers Jarman came to life, completely owning their instruments, the stage, and the crowd; giving us a glimpse of three developing pop legends in their own right. Once the lights dropped and the music started Marr blended seamlessly into the band, all sense of his musical hugeness was gone as he inserted his heroic pop guitar lines right alongside the guitar-n-bass powerhouse provided by Gary and Ryan. Drummer-brother Ross was no slouch either, often standing on top of his drum-kit while playing it!

The Cribs have a really great thing going. Their live set was all energy and fun as the twin lead singers traded lyrical duties mid-song, seemingly at random, without ever missing a beat. Never overly-serious, their lyrics and tempos kept the the crowd moving unlike anything I have seen in DC in years. When they weren’t doing their twin trade-off singing thing, the vocal focus was on The Cribs’ excellent call-and-response choruses that had Gary and Ryan belting out lyrics back-n-forth with the crowd.

The crowd at this show was shockingly small, filling just half of the 9:30 Club. I noted before the show that some Brit-sensations must be more sensational than others in DC’s opinion. Just last month I saw Arctic Monkeys play to a 9:30 Club packed to the gills. A note on that though: while the Arctic Monkeys show was incredibly good, the crowd was huge and full of jerks. The Cribs crowd, on the other hand, while small had more joy and passion in their chests than a crowd ten-times its size. This was a seriously awesome crowd of real fans and that made a huge difference to the energy in the room. The crowd were ecstatic; dancing, jumping, and singing along to not just the hits but to every damn song. There was even some swooning-girl, Beatles-esque screaming going on. It was awesome and I’m proud of our town for finally shaking off some of the doldrums we are recently infamous for. If any show deserved a great crowd it was this one. The Cribs put on an amazing show and I will definitely be seeing them every chance I get from now on.