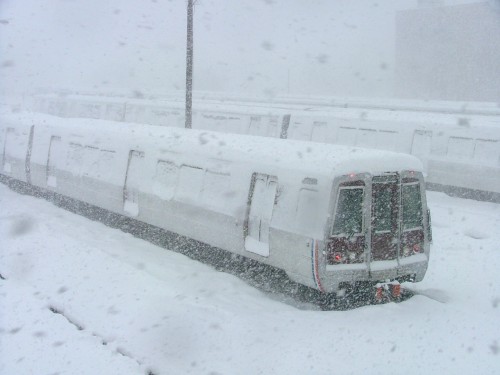 Snow. You remember it, surely? Anywhere between two and four feet over the last week. It crippled our roads and sidewalks, and it’s left several small mountains in most of our neighborhoods. I’m sure you aren’t surprised that it also crippled Metro.

The bus system has to rely on local municipalities to clear snow from the roads. Many snow emergency routes were cleared fairly quickly, but the conditions on secondary streets varied wildly, leaving many buses running on altered routes, even today.

The subway system was also hard hit. Above ground service had to be shut down, and only fully came back online on Friday afternoon. By that point, the Federal government had reopened to one of the worst commutes (by car or by rail) that I’ve seen in 22 years here. So what happened and why, and what should Metro be doing differently in a storm? 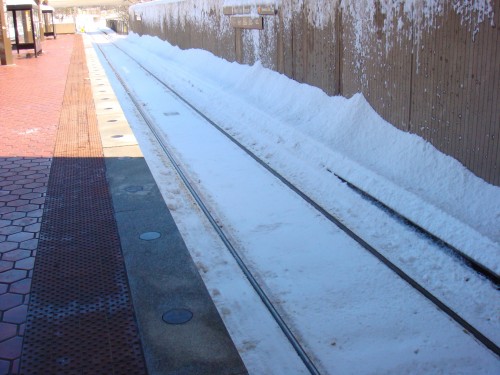 Metro’s biggest challenge is keeping the electrified third rail clear of snow and ice. Once we have around 8″ of snow on the ground, Metro stops service for fear of damaging equipment on the undercarriage of the trains, as well as fear of the snowpack damaging the third rail. Metro uses heavy equipment as well as trains with deicing equipment to clear above ground tracks. It’s a slow process, and we saw from the weekend storm that it took Metro three days to clear the tracks.

Metro employees also had problems getting to the stations, with some supervisors having to drive SUVs to pick up employees from their homes. If you can’t get your staff and contractors there, it’s hard to clear the snow and make some headway.

As a smart woman said to me, how could we have expected Metro to be ready on Friday, when it took them three days to dig out of the weekend storm? Indeed, expectations were too high for last week, knowing what we knew. But were they too high in general? What should Metro be able to deal with?

I believe Metro should be able to deal with the aftermath of huge snowfalls in the area without the crippling slowdown underground, and a quick recovery above ground. Unfortunately, that takes money, and the usual argument is that we don’t get enough snow in the area to spend that money on snow fighting equipment.

The problem I have with that line of thinking, though, is the eye-popping numbers which OPM estimates for lost productivity. One hundred million dollars in lost productivity per day is a rather large sum of money. And while I’m loathe to take that number at face value, it is clear that the impact on the Federal (not to mention local) budget is non-trivial. Perhaps the Federal and local governments can come up with some cash to help Metro purchase and prepare for larger snow storms. (Yeah, I know — unlikely.)

Metro’s current line item for snow fighting is $2.5 million. That’s not a lot of money, and includes everything from salt and deicer to contractors and equipment. We’re told by Metro staff that the numbers for last week’s storm are being calculated and due out later this week. We’ll be sure to share those numbers with you when we have them.

What’s reasonable? How much should the government spend to shore up snow fighting? What level should Metro be expected to operate at, in a town where average snowfall is about 15″ a season? Sound off with your expectations and experiences below.