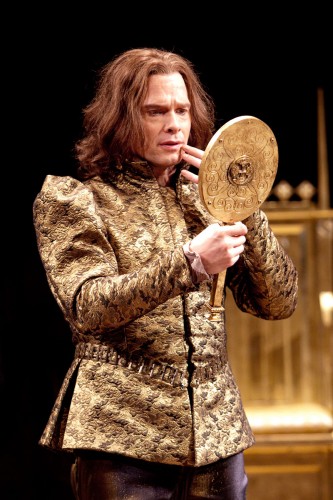 Ok, deep breaths. Let’s jump back for a minute.

Richard II is a play about power and authority at a time when the divine right of kings was still a common belief. People in Shakespeare’s time could still remember civil wars fought for kingship, and harkening back to an earlier era of strife made the topic a little safer to explore. Richard, once a boy king whose bloom is now fading, is an arrogant man but a lion nonetheless. His vanity blinds him to the dangers surrounding him, namely his seemingly straightforward cousin Henry Bolingbroke, who starts out as a macho hothead but is really more Machiavellian than anyone else. Ghosts of the great past king Edward flicker in Richard’s uncles, whose advice he ignores to the loss of his kingdom.

It’s a sad meditation on the follies of glory. Which I find a little ironic, given the folly on display here. 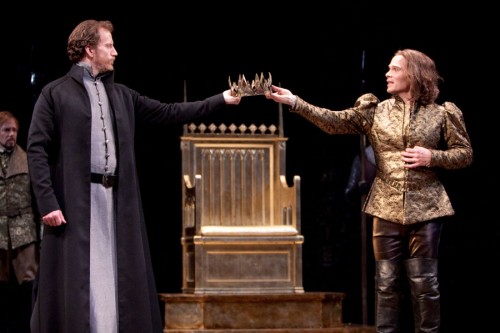 There are missed opportunities all over the place, and I can’t fault the actors for the missteps. These are truly talented professionals not being served well by their director, and especially not by their vocal coaches. I haven’t winced so much at bad verse-speaking since… well, let’s just say it went into William Shatner-land. When two of the most beautiful monologues in the canon are ruined by actors of this caliber, that’s a bad sign. Again, what is going on? Great Edward’s brothers, uncles to Richard, are played like whiny old women. Yes, the characters are past their prime but there’s no excuse for that kind of lazy choice.

The true tragedy here is that there’s no transition for Richard from lion to rose. Instead he starts out as a high neurotic and therefore has no place to go. I spent most of the night feeling sorry for Michael Hayden in the title role, obviously a notable actor of great sensitivity. But by the time he smashes the mirror in one of the great Shakespearean moments of self-revelation, we hardly care that he’s broken – because he’s been broken all along. He’s been pushed out with no character arc, no journey to take. Hints of what could’ve been gleam in his scenes with Ted van Griethuysen as the Duke of York – in a few short strokes these two create a powerful and tender history between uncle and nephew that made me long for more such realized moments.

Surprisingly, Charles Borland’s Henry Bolingbroke actually has a journey, from eager warrior to uneasy king. His very subtle and natural performance was easily the highlight of the production for me. And my god, when Naomi Jacobson entered with a strong clear voice and a firm grasp of humor as the Duchess of York, the audience’s relief to see her was intense, released in almost nervous laughter.

What else is good? Well, the plot and family relationships are clearly rendered and easy to follow, which is definitely an accomplishment with such a complex history. The set design by Lee Savage is gorgeously simple, a golden throne rightly the focal point. But the less said about an anachronistic wheelchair, the better.

I’m seeing Henry V on Saturday and I don’t want to see this same kind of production. I want to be proven wrong. Please, STC, prove me wrong.