The Civil War Defenses of Washington were a complex system of fortifications built by the Union to protect the District.  With a Confederate state to the south and a Union state to the north, DC seemed like a place that needed some enhanced military protection, so the Union army worked to create 68 forts (mostly on high ground) and 32 miles of military roads in the city between 1860 and 1865.  As the National Park Service tells it, “The defenseless city of 1860 had become one of the most heavily fortified cities of the world.”

After the Civil War, the city was left with these huge expanses of open space, often with earthworks and other notable characteristics.  Unfortunately, these spaces fell into disuse and many of the fortifications were eventually destroyed.  Many of the connecting greenways between the forts were also sold off for development.  But in 1902, the McMillan Commission recognized their importance and their potential for recreation, and called for their preservation.  The road to preservation has been a bumpy one, as ward boundaries have frustrated attempts to unify the system of parks and trails. 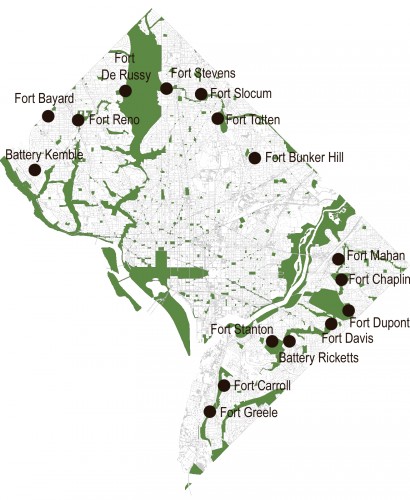 As you can see in the above image, some forts remain today (Reno, Dupont, Totten, etc) while others have been lost.  Some parts of the greenways remain (check out the northeast boundary of DC between Fort Totten and Anacostia– that’s almost a continuous section there), and some are even used for recreational purposes, like the link between Fort Mahan, Fort Chaplin, and Fort Dupont.  The National Park Service is in charge of this land and they’re currently working with the National Capital Planning Commission and the District of Columbia to make these parks more accessible and visible to the public through the CapitalSpace initiative.

Other interesting/fun facts about the Fort Circle Park system:

I’ve got to admit, this was one of the most surprising and interesting Mythbusting features I’ve ever researched. I had no idea that DC was home to such an extensive network of defenses during the Civil War, and I definitely didn’t know that some are still connected by trails.  Once it warms up, I can’t wait to head out on my bike and explore some more of the District’s history.  Myth confirmed!

21 thoughts on “DC Mythbusting: The Lost Forts of DC”