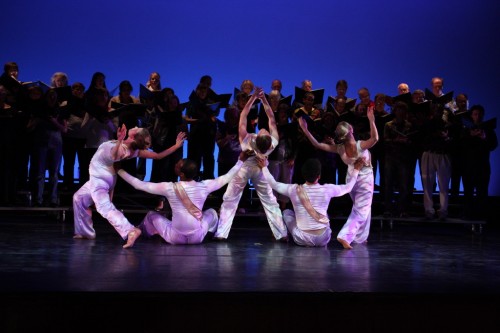 As a young balletomane, I was fascinated by the story of the explosive performance of Igor Stravinsky’s The Rite of Spring, performed by the Ballet Russes on a night that basically produced mass hysteria in its audience. Star dancer Vaslav Nijinsky choreographed, and apparently had to stand on a chair in the wings shouting out counts for the dancers, who could not hear the music over the outraged audience’s uproar. The music and movements were so revolutionary, the elite had a collective heart attack that erupted into a riot.

Saturday night I had the privilege of attending the world premiere of a piece by Bowen McCauley Dance, set to Stravinsky’s Mass with the Cantate Chamber Singers led by music director Gisele Becker. Stravinsky’s music is notoriously difficult, but we no longer expect the audience to scream in protest and throw punches at each other as they did that night for The Rite of Spring (though, wouldn’t that be an interesting evening at the Kennedy Center?)!  When Becker approached BMD artistic director Lucy Bowen McCauley about collaborating on a piece of music never before choreographed to, by a composer many consider impossible if not painfully hard to tackle, her first reaction was -“What have I got myself into?”

Luckily, the company was well up to the task. No riot occurred, just a beautiful evening of vibrant dance and song.

There’s a funny synergy at work here – I got to speak with Bowen McCauley afterwards (everyone just calls her Lucy), and she told me that during her start with the Joffrey Concert Group, she performed in the famous triple bill tribute to Nijinsky that the Joffrey Ballet did with Rudolf Nureyev of La Spectre de la Rose, L’Apres-midi d’un Faune, and Petrouchka – all pieces originally danced by Nijinsky with the Ballet Russes. Though she was quick to point out she was the equivalent of a dance supernumerary, I still gushed like the ballet-crazy kid of my teens – “you were on stage with NUREYEV???”

Why am I bringing all this up? Because there’s an incredible history to dance, a lineage that stretches back through time – Baryshnikov, Nureyev, Massine, Nijinsky, Pavlova, Taglioni, all the way to – well, Louis the Freaking Sun King. Everything builds upon what came before, and until the digital age, dances were lost forever if not performed. That poignancy of life and death was very present in Bowen McCauley Dance’s performance of Stravinsky’s Mass, exquisitely danced by Alaina Williams, Alison Crosby, Alicia Curtis, Alvaro Palau and Brook Urquhart. 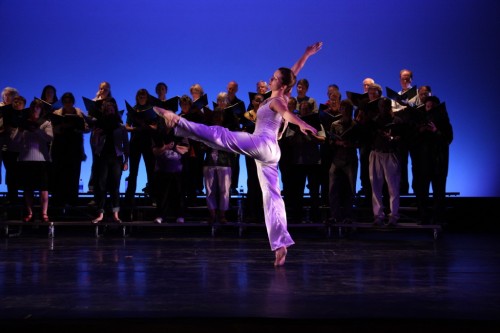 The white and gold clothed quintet evoked both the reverence of the words for the Mass for the dead and the quirkiness of Stravinsky’s music. Lucy told her dancers to “think of cathedrals and stained glass,” that hushed feeling you get when you enter those massive places of worship no matter your religion. The dancers ascend and descend, alternating being fluid and floating with being repeatedly grounded. Several rapid, almost bas-relief poses gave a distinct nod to Nijinsky as well, as if cathedral statues are coming to life and freezing again in medieval tableaux. But it’s the pattern of ascent and descent that gave the performance its power. Eventually, the three women sucumb to the heaviness of earth and humanity. The male angel figures drag two female bodies off stage, while the third remains, first in a prone position, then more gently curling from death to sleep.

I’ve been wanting to see a performance by BMD for a while, ever since I learned about their dance programs for people with Parkinson’s Disease. As I wrote then, BMD is the only dance company offering these weekly classes in the DC area, Lucy having been certified by Mark Morris Dance Group. The audience Saturday night at the Kennedy Center’s Terrace Theater was full of PD class members showing their love and support for the company. I was told of the lengths many of them travel to attend class, and the joy it brings them was truly inspiring.

If you want to get involved, start off by joining flash mobs with BMD and the DC Cowboys this weekend. I’m not kidding, this is how versatile a company BMD is, from Stravinsky to “Mamma Mia!” – join them in Dupont Circle at 1pm Saturday, May 1 or 3pm at Ballston Mall and perform along with them!

This is a company composed of lithe and dynamic dancers led by a passionate and genuine artistic director. Bowen McCauley Dance is well worth your attention, so head out for the next performance and see for yourself.