There are lots of things I think would be cool to do, so I just dive in without proper training. One is growing herbs on the deck. Understandably, my results have been mixed. The potted mint is going great guns, but last year the basil plant that had been visibly shooting up daily as if it inspired Jack and the Beanstalk suddenly turned black, dropped its leaves, and keeled over. No more fresh basil for me.

So when Arlington Adult Education offered a class called Growing Herbs in Containers, I signed up—mostly out of sympathy for the plants. And then I came late to class. When I walked in, instructor Dottie Jacobsen stopped her talk, greeted me, then asked, “What’s your growing situation?” Under the bright lights and many watching eyes, I came clean: “I kill plants.”

And presto! Within two short hours, I had a long list of things I’d done wrong and could easily correct. Since some of my plants did actually survive, this knowledge was inspiring. “Many of my students have gone on to be excessive container gardeners,” Jacobsen reassured us. “They say, ‘it’s a jungle out there.’” What are her tips? 1) Use the right kind of dirt. Jacobsen calls it a potting medium, to give you the correct term – and plain ol’ potting soil is out. Instead, use ProMix, which includes sphagnum peat moss, vermiculite and perlite. The bag should feel light when you pick it up, and you’ll need to dampen it before you put it in the pot. Mix it with water until it’s fluffy and moist.

To cut the need for watering in half, add a few polymer gels deep in the pot. These crystals will soak up water and release it around the roots. Only use this for thirsty herbs, though, such as mint, chives, parsley, cilantro, and basil. Skip this step for herbs that like it dry, like rosemary, sage, thyme, and lavender.

Follow the instructions on the package so that you know how much to use. (I once used these when planting flowers in a friend’s back yard and apparently overdid it. He said the first time it rained, he looked out to see the flowers rising up from the earth.) Put the potting medium on top of any polymers, filling to half an inch below the top of the pot. A crust may form on top of the soil over time, and this arrangement means your water will still flow into the pot, not over the side.

For the first two weeks after you pot your plants, shake some black pepper on top of your newly dug earth, to repel squirrels searching for “vaguely remembered acorns,” said Jacobsen. Avoid the red pepper, though – black pepper works to keep them at bay, and the red can burn their paws and eyes as they scratch. 2) Water them properly. “Water is one of the fundamental issues of container gardening,” Jacobsen said. But parching them isn’t always the issue. “Water is often a huge part of failing,” she said. “Too much is as bad as too little.” To see how dry they are, rap on your containers. If it sounds hollow, your herb is dry. If there’s a thud, it’s saturated.

Above all else, make sure you’re using a pot with holes in it for drainage, and never let your herb stand in water.

When you do water, use a soft spray. Jacobsen shared several hose attachments that deliver a gentle rain. 3) Feed them. Because you’ll be watering the containers so frequently, you need to feed your herbs every other week until fall. Make sure that you choose a fertilizer that’s approved for edibles, and avoid granular fertilizers, which are too harsh. Miracle-Gro will work, or you can treat your pot with Osmocote for vegetables, which you’ll need only once per season. If you want to go organic, try kelp or fish emulsion, and watch out for cats. 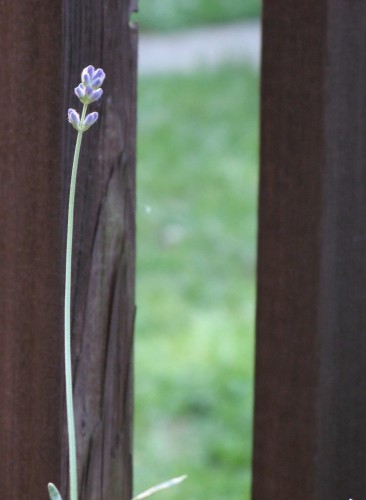 4) Prune. “Plants need tough love,” said Jacobsen. That means pruning and harvesting. I’m thrilled that my lavender is tossing up tiny buds this week, but the stalks they’re on are crazy long. And the rest of the plant is clearly overgrown, winding around outside the pot. It badly needs, as Jacobsen calls it, a haircut.

Cutting the plant releases a hormone that tells it to grow. So you’ll get a bushier plant.

For herbs like basil, cut anywhere above the first set of true leaves that cluster around the main stalk. For herbs that are more grasslike and grow in clumps, cut above the new growth that springs up from the center of the plant. Right after a bloom is a good time to cut most herbs, though with basil you’ll want to cut earlier to prevent a bloom.

If you don’t want to eat all of the cuttings, stick some in water to see if they’ll root – and give you a new plant. 5) Repot when necessary. Roots need both water and air. Yellow leaves are a sign your herb is asking for a bigger pot, said Jacobsen. When it’s time to move your herb to a new home, choose a pot that’s twice the size of the original. What you don’t want is a little herb swimming in a big pot, because that will make it more difficult to get water to the roots.

Consider pruning when you repot. As you transfer the plant, butterfly the roots, gently separating them into four opposite directions to keep the plant from being rootbound. Then scoop a hole in your pot, plop the herb in, and water it. “Then it’ll snuggle in,” she said.

Jacobsen also shared many other tricks of the trade, including identifying and fending off hungry critters, choosing pots, and growing herbs indoors through the winter. And she brought in many varieties of herbs, including fragrant lemon thyme, pineapple sage, rosemary, and lavenders.

She’ll be back in Arlington May 18 and June 23. If you’re a certified plant killer like me – or someone who has the basics down and wants to learn more secrets of growing herbs – she may make a better gardener out of you.