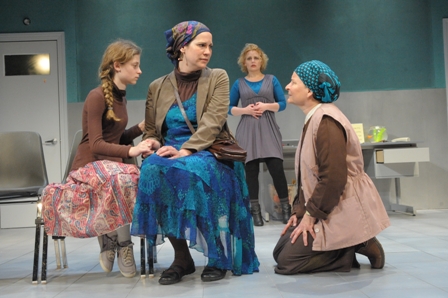 Plays that take place in a confined space live or die by the scenic design, and here Kinerath Kisch has created two simultaneous worlds. The women are caught between the sterile waiting room and ritual bath itself, with Dan Covey’s lighting beautifully delineating each space – the mixture of the harsh real world and the dreamy spiritual one.

As the divide between sacred space and the mundane exists in the location, so it does in the two characters facing off – the idealistic outsider Shira and the practical oldtimer Shoshana. Shira has come to the mikveh from outside the community and has a decidedly individual approach that immediately shakes up the women’s expectations. The seemingly placid and cheery community hides some unsavory secrets, abuse of many kinds, and as the longtime attendant of the bath Shosana is not about to let anyone rock that rigid boat. 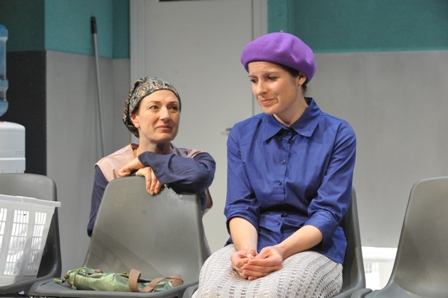 One of the chief joys of this production is watching these two slowly build tension until it inevitably erupts, and that conflict is in the extremely capable hands of Lise Bruneau and Sarah Marshall, respectively. I’m not sure I will ever tire of these actors, whose honesty and dedication to the text and the ensemble are always striking. Their battle royale at the end of the first half is an acting master class on how to raise the stakes with emotional committment and technique that never grates.

“I received God like a birthday present,” Shira says of her mother’s late conversion to orthodoxy, in one of the many striking lines that keeps playwright Galron’s plot from diving too deep into stereotypes. As Shira and Shoshana struggle, the women around them fall into the classic archetypes of the “women’s issues” genre, previously mentioned. As community gossip and perpetual babymaker Esti and uptight wealthy matron Hindi, Helen Pafumi and Kimberly Schraf have great fun playing off of each other. It’s problematic, definitely, the propensity to fall into cliche, but somehow I wasn’t bothered by it too much – after all, these stereotypes exist because they can be true.

Shira is fighting against tradition to rescue battered wife Chedva, whose initial denials are spot-on simple by Carla Briscoe. When she finally lets reality in and details her abuse in a monologue more painful because every cliche detailed is true and happens every day, it’s a punch in the stomach. Her pale silent daughter Elisheva, well done by young actor Rachel Condliffe, is a living reminder of the guilt of inaction. 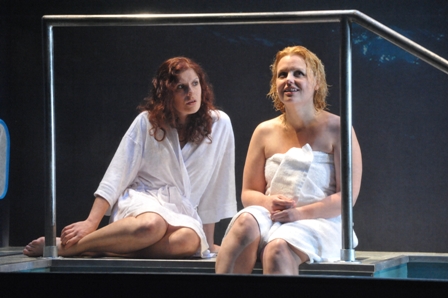 Entering this sterile and traditional environment come two more rebels in their own right – nervous new bride Tehila (Amal Saade, charging and faltering like a wounded deer) contrasted with tarted-up singer Miki (Tonya Beckman Ross, instantly energizing the air). Tehila’s arranged marriage is driving her deeper into panic, a fear brushed off by everyone with devastating consequences. Though she receives plenty of advice from all the different factions, none of them will do any good. We the audience can see this, but sadly the characters cannot.

In the end, Mikveh rises above the genre because of the brilliantly strong ensemble acting and a genuine desire by the playwright to examine these issues fairly. It may seem a bit crowded and chaotic towards the end, and the final shock should be expected, but still it’s a riveting piece about the power we wield to silence voices, both of others and of our own.

One thought on “We Love Arts: Mikveh”