I was born and raised in the suburbs, and when I decided to become a city planner and move to a major city, I heard from many people in my parents’ generation about how dangerous Washington DC was.  “It’s the murder capital of the country!” But is it really?  How does DC’s crime rate compare to that of other cities?  These sound like some good myths to bust.  Let’s get to it!

So is DC the murder capital of the country?  This claim may have been true at one point, but that was about twenty years ago.  The District went through a trying time in the early 90s, when crack cocaine took over the city and murders peaked at 479 in 1991 (an astounding 78.92 murders per 100,000 residents, Borderstan points out).  But last year, there were 143 homicides in the city, continuing a decades-long downward trend.  So yes, at one point the District may have had the highest murder rate in the country, but that’s definitely not the case now. So now that we know that DC isn’t the murder capital of the country, let’s break down the types of crime in the city.  According to the Metropolitan Police Department, there were over 36,000 crimes in the District in 2008.  Here’s how they break down: 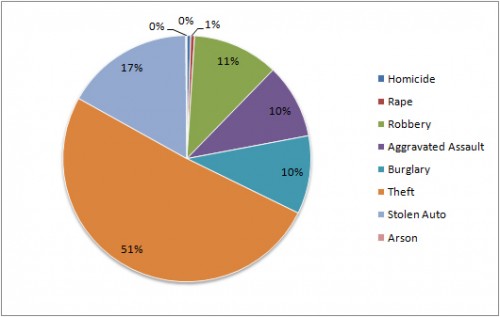 Of course, crime isn’t evenly distributed across the District.  According to 2007 data from DC neighborhood profiles, neighborhoods range from practically no violent crime (in Chevy Chase, Cathedral Heights, and Glover Park, for example), to areas with 40 times as much violent crime (in Trinidad).  And for property crime, it’s a bit different– the safest neighborhood is still Chevy Chase (followed by Spring Valley and Palisades), but the areas with the highest property crime rates are Penn Quarter and Shaw.  And to illustrate the divide between various quadrants of the city, there’s this murder map showing the location of homicides between 2004 and 2006.

So in conclusion, DC is not the murder capital of the country– that title goes to New Orleans.  Unfortunately, the District is still near the top in cities with violent crime, so there is some truth to the statement that DC is more dangerous than other comparable cities.  But like any city, there are super safe areas and some not so safe areas here.  I feel pretty safe in my corner of the city, and the District has come a long way from the violence of the early 90s,  so the next time someone tells me how dangerous Washington DC is I’m going to set them straight.  Myth busted.