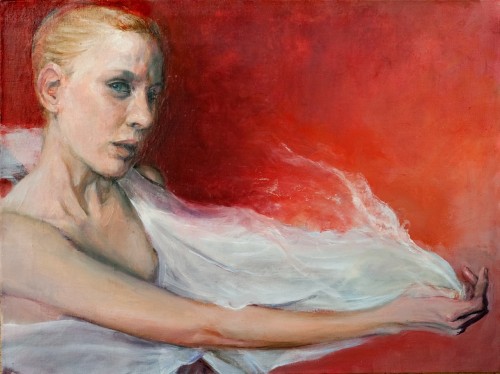 Judith Peck is a painter; moreover, she is a thinker and an advocate of social justice – raising awareness through each and every brushstroke.  Through June 26th, Peck’s largest show to date, Original Position, will be exhibited at the Hillyer Art Space in Dupont, and is inspired by John Rawls’ Theory of Justice and Fairness.

Judith Peck exudes an aura that automatically draws you in; talking about her work and ideas with the type of passion and honestly that makes her art relatable – something that artists often neglect and even, in some cases, discourage.  During our brief time together while previewing her collection, not only did she share with me her love for DC (our museums are “the best in the world”), Peck also passionately expressed her concern with healing and thinking; making our shared experience one that left me feeling equally vulnerable and empowered.

Her latest collection, Original Position focuses on the raw issues surrounding circumstances of justice, as first introduced by philosopher John Rawls.  Peck explained that Rawls “spoke to her-long time devotion to painting about social justice issues”, making his theoretical curiosity in the veil, as a barrier which blinds people to the facts during their interpersonal development and understanding of justice, the perfect setting for her collection.  Each figurative abstract within the 16-piece collection is based on this notion of the “veil of ignorance”, and individually highlights a specific social construct through vivid imagery – encouraging viewers to investigate their individual ideals and concepts of fairness. 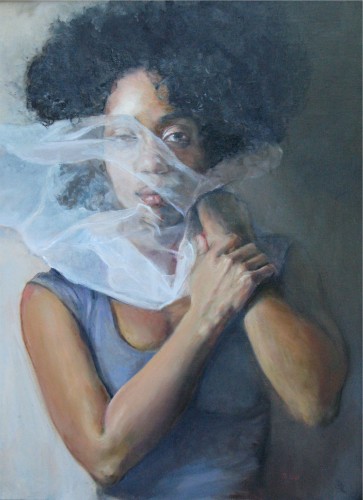 In Veiled Judgments, a young lady named Alison (who is featured in two of Peck’s paintings in this collection) models the veil, as it sweeps across her lovely face and soulful eyes.  Peck felt that Alison would be the perfect model to show of the vivacious nature of the veil because her afro-hairstyle “went into the atmosphere like a veil, light and airy”, creating a unifying bond between the two.

In the collection Peck switches between the use of models and composites to create her figures, although her accuracy makes it quite difficult to distinguish between the two.  However, I do believe that for the paintings where Peck did call upon a model, there is something rather eerie about the translation of their gaze.  When I pointed my impression out to the artist, she explained that when a model comes into the studio it is encouraged that communication between the two of them occurs constantly as a means to “prevent mindless drifting, which often translates as a stoic look in the eye”. This clear presence helps the viewer to speak to the soul of the model, creating the necessary empathy for challenging ideas of existence. 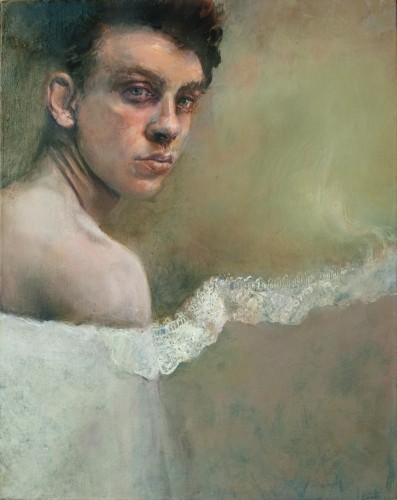 In Veiled Borders, Peck’s 19-year old son served as the model of choice because his worldly ways and bright awareness captured the very essence needed to make the conceptual canvas work.  In this veil composition, her son is seen “touching the world”, demonstrating his determination to protect (equality) for the future without being overwhelmed or burdened by it.

Although Peck is known best for her figurative work, among Original Position there lies a series of abstract paintings, called Four Studies of the Veil, which explore the veil as it serves as a filter of light, capturing luminosity while at the very same time shielding from it.  As the last pieces of the collection finished, Peck describes the process of creating these abstractions as an opportunity to “explore the veil freely”, opening up new ideas and opportunities for pushing her work to a new place in the future.

Original Position is on display till June 26th at the International Arts and Artists’ Hillyer Art Space.   The Gallery is open on Monday from 10-5, Tuesday through Friday from 10-7, and Saturday from 11-4.