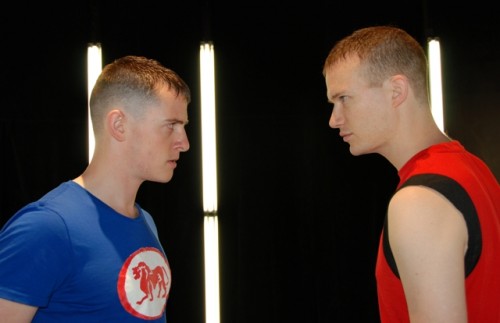 The “black box” theater is a tricky environment. Actors and audience, being so close to one another in a tight setting, enter into a kind of silent agreement – we see them sweat, they hear us breathe. Actually, it’s a bit like a date. We start out eager for it all to go well, maybe laughing a little too hard, being charmed. But it can end awkwardly. Or go brilliantly.

Solas Nua has the black box date down. In a tiny square nestled in the Flashpoint Gallery (properly known as the Flashpoint Mead Theatre Lab), they keep things sparse and simple, focusing on brutally provocative plays featuring actors who relish the meat of contemporary Irish drama. It works. I’ve yet to see a lazy or self-indulgent piece performed here (last year’s startling Disco Pigs was the first play in a long time to punch me in the gut so hard I cried).

On a given performance of Johnny Meister + The Stitch, the immediacy of live theater is strongly evident as you watch the beads of sweat slowly trickle down Chris Dinolfo’s face as he stands (briefly, it’s a fast clip) lit by long flourescent bulbs. Or the dangerous crackle of Rex Daugherty’s eyes as he makes momentary eye contact with an audience member. This is the thrill of the black box theater, and it’s highlighted by this American premiere of Rosemary Jenkinson’s play about two rough Belfast boys and one wild night.

Irish author Rosemary Jenkinson is not only a playwright, but pens poetry and short stories as well. This literary background is notable in the way the play unfolds through two densely descriptive monologues, switching acts between the two characters. It has a Rashomon-like quality in that the audience is seduced by the viewpoint of the first character to have a voice, Johnny Meister, only to then have that view challenged by the second character, his rival Davey Stitch.

The entire action takes place over the course of one night in Belfast, as the boys deal with fallout from their previous violent encounters and head towards their inevitable final meeting. How these points of plot intersect and circumvent each other is part of the enjoyment of the play, so I won’t reveal any spoilers. Suffice to say the twists in the battle between these two serve to draw a tighter noose around them, until the final moment when plot and narrative collide into something more poetic and mysterious.

Director Des Kennedy keeps things sharp and frenetic. If you have difficulties understanding accents, don’t panic – just let the language wash over you, as the physical action will pull you through (including some hysterical simulated sex). This is a script heavy on slang, weaving a portrayal of Irish life that has nothing to do with shamrock-spattered rainbows. The harsh reality of living on the “estate” (project or ghetto, to us) may be littered with humor but it’s still the kind of struggle most of us have never experienced. There’s the usual sex drugs and rock-n-roll profanity that goes along with that, but what’s more intense is really the overall feeling of hopelessness, a chain wound round the necks of the two boys that they can never shake.

A production like this rests heavy on the backs of its actors, and the team of Dinolfo and Daugherty is well fit, whip smart and adept at involving the audience – a very talented duo indeed. The caged mania of Dinolfo’s Johnny contrasts with Daugherty’s simmering depression as Stitch – they are two sides of a bipolar personality, to my mind, the soul of Irish youth affecting disaffect at the past of the “Troubles” yet still scarred by it in ways they do not comprehend, or acknowledge. Their paternal urges are redirected ambition, their sexual needs a thwarted intimacy, their violence an attempt to shrug off the weight of poverty’s chain.

All this is accented by Marianne Meadows’ painfully harsh lighting design. Lining the black box with naked flourescent bulbs that resemble prison bars is a gamble of potential audience alienation that works brilliantly. Something so simple yet so pure should be recognized for its daring.

The trick to a play like this is to be able to weave the reality of pretty appalling events and themes with outright humor. Johnny Meister + The Stitch succeeds, shadow boxing between the squalor and the laughter. It’s a painful and beautiful duet worth entering that tricky black box environment for, to sit so close you can see them sweat and they can hear you breathe.

One thought on “We Love Arts: Johnny Meister + The Stitch”