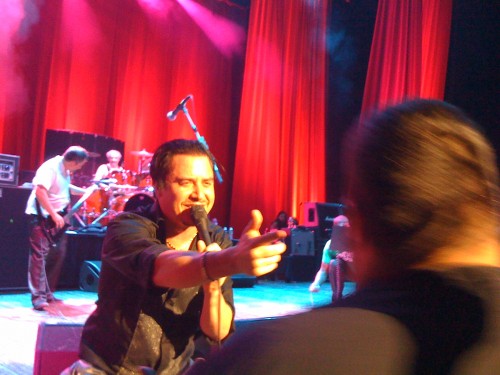 As much as I would like it to be, Washington DC is not the live-music center of the universe. Sometimes to see that special show I have to hop on a jet, castaway on a boat, or hit the road as I did this past weekend to catch one of the limited East Coast reunion shows by Faith No More. These shows were limited enough (only 3) and special enough (a hell-froze-over reunion) that we thought some of our DC readers might be interested in reading about the one I attended at the Mann Music Center in Philadelphia last Saturday.

When considering Faith No More and the quality of concert they put on, it is the little details that make the difference. The little details like: Mike Patton riding a fan like a horse while singing Michael Jackson’s ‘Ben’; an unexpected cover of Vangelis’ ‘Chariots of Fire’ theme; song verses done entirely in flawless Portuguese on a whim; and a singing, daredevil, strip-tease atop a 30-foot rope-ladder. In other words, when Faith No More perform live there really are no such things as little details; everything about a Faith No More concert is as huge and in-your-face as it can possibly get. From Mike Patton’s epic vocal range and deranged persona; to Roddy Bottum’s impenetrable, wall of synth-keyboards; to Billy Gould and Mike Bordin’s spastic funk; and Jon Hudson’s heroic guitar riffs Faith No More’s live sound is so gigantic it is almost absurd. And it would be absurd if they weren’t such a tight and overly-talented group of individuals. Saturday night’s concert in Philadelphia was a success on every level that treated a few thousand fans to the stellar, albeit brief, return of an old favorite and left us all longing for more from these SF Bay-area originals. 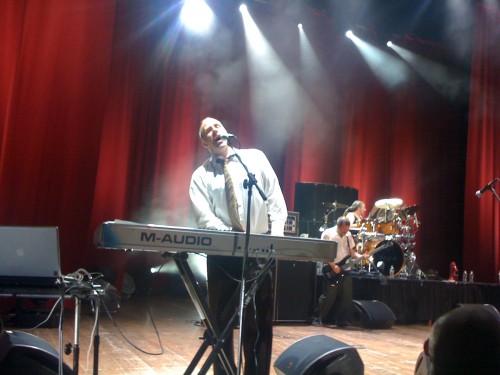 Ah, Faith No More, it has been far too long. For me, going to see Faith No More in concert is like visiting with an old friend. My first real, rock concert was seeing Faith No More perform at the Tower Theater in Philadelphia back in 1992. I also caught them on their farewell tour in 1997 at the 9:30 Club here in DC. Always a fan, my love of Faith No More’s music has only grown over the years as Mike Patton has put out project after project constantly swinging between sorta-pop and the experimental. I have seen Patton perform many, many times since FNM called it quits. The man is a musical genius with a head so full of ideas that I think it is literally driving him mad. I enjoy just about everything Mike Patton does, but it was with Faith No More that I believe he produced his very best vocal material. Something about the slight degree of focus that this funk/prog/rock band imposed on him worked just perfectly. On their masterpiece album, “Angel Dust”, Patton is all over the place vocally but is never out-of-control. Faith No More produce music that is just odd enough, that there is plenty of room for the genius to play without screwing up the songs themselves. Saturday night’s show was the perfect example of the band totally rocking out while giving Patton plenty of time for the vocal acrobatics he is famous for.

Notorious back in their heyday for on-stage shenanigans and tongue-in-cheek covers, Faith No More opened the show with a cover of Peaches & Herb’s ‘Reunited’ during which Mike Patton slinked onto the stage wearing a silver-lame suit and sunglasses, while working a cane. He and Roddy Bottum exchanged verse and chorus through-out the faithful rendition of this soul classic. It was a humorous opening and seemed to be not quite expected by the 1000+ strong crowd of hard rock fans. Any worry or confusion on their part was quickly erased when the band launched into a furious three song stretch of ‘From Out of Nowhere’, ‘Be Aggressive’, and ‘Caffeine’. It was fantastic to hear these older tunes dusted off and properly kicking-ass again. ‘Be Aggressive’ of course got the crowd chanting along with its spell-out choruses, while ‘Caffeine’ kicked in the schizo screamer/wanna-be crooner in all of us. 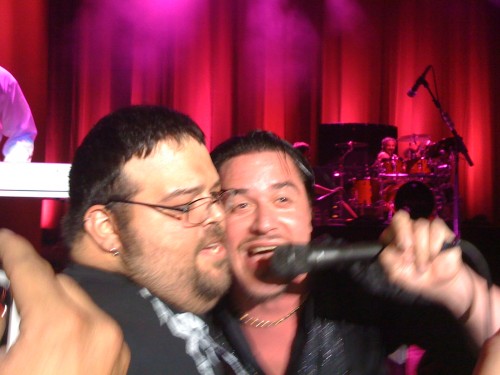 The Saturday night set-list was a good sampling from all of the Mike Patton-fronted FNM albums, with a focus a bit more on the slow-jam side of their material. ‘Evidence’ was a real highlight of the night, a majestic slow song that got everyone swaying along. Just to show off, Patton offered to do the third verse in Portuguese and then proceeded to do so and beyond. Having recently completed a solo-tour of Italy singing Italian pop songs of the 60′s, Patton’s multi-lingual crooning was in top form as he finished out ‘Evidence’ and then put his hands in the air as if to imply, hey no skin of my back. Color me impressed Mr. Patton, I wouldn’t be able to successfully order a glass of water in Portuguese.

They followed ‘Evidence’ with an on-stage collaboration with opening act and human-beatbox, Rahzel the Magnificent. Rahzel had treated us all to an extended opening set of his deep-bass beats and vocal imitation skills earlier in the night and I was hoping he would appear during FNM’s set.* Together the band and Rahzel deconstructed and rebuilt a pre-Patton FNM song, ‘Chinese Arithmetic’. It started as a funk-filled groove fest until Patton started singing and howling and Rahzel upped his game turning the song into somewhat of a noise-jam. I was pretty amazed at the different stages this song took while the band and Rahzel had their way with it.

‘Surprise You’re Dead’ offered the angriest sing-along of the evening, satisfying everyone’s hunger for Metal with killer guitar work, truly head-bang inducing drum and bass action, and its chants of “It never, ever ends!”. I think one of the things that made Faith No More so appealing in the 90′s and again on Saturday night is their ability to blend aggression and balladry. They demonstrated this with a superb three song stretch of ‘Last Cup of Sorrow’, their cover of The Commodores‘ ‘Easy’, and ‘Midlife Crisis’. Faith No More first appropriated ‘Easy’ on their “Songs to Make Love To” EP back in 1993 and that was really the world’s first introduction to Patton as pure-crooner. The guy really does have the chops which he proved again when the band delivered a uncompromising cover of ‘Easy’ on Saturday night.

There were a few times that the Metal-ness of the crowd seemed to demand more barn-burners but to Faith No More’s credit they stuck to their guns and played the set that they wanted to. Not that I can see how any Metal fan could walk away disappointed after the phenomenal version of ‘The Gentle Art of Making Enemies’ FNM dropped on us next. I caught FNM’s abbreviated reunion set at Coachella earlier this year and that song was a highlight, but their performance of it on Saturday totally trumped the Coachella version. I should say here that the Coachella reunion set was a tightly focused, precision strike of a performance and was fantastic. Saturday night’s full head-line slot was even better. On Saturday night we were treated to Faith No More indulging themselves by playing their own favorite tunes and having the time to improvise and interact more with the crowd. Saturday night’s show was the full Faith No More experience. 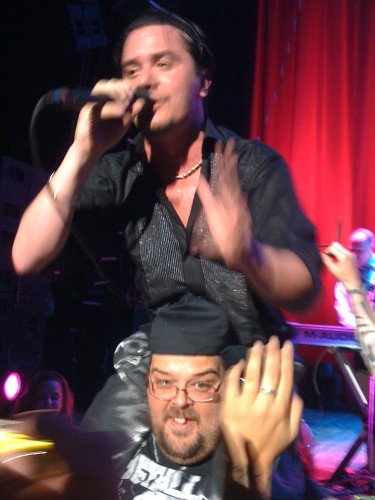 This was never more evident than during the band’s cover of Michael Jackson’s ‘Ben’, during which Mike Patton (while singing) climbed onto the shoulders of a rather large audience member and steered him through the front sections of the crowd. Patton did so while tickling the audience member under his chin and giving a pitch-perfect performance. At one point, Patton gave his steed the mic and this good-humored, Metallica-shirt wearing, dude sang part of a verse! Patton rode this guy for the duration of the song until the final bit, when he knelt on the stage and gave his ride a personal verse as thanks.

After that the final bits of the show were right on the verge of total chaos (as any self-respecting FNM show should be). The band played an extended version of ‘King for a Day’ which they devolved into a weird noise-jam; that judging by Mike Patton’s face didn’t really seem to go according to plan. No worries though as they recovered by launching into an oddly timed version of their most well-known hit ‘Epic’ that had the sing-along audience rushing to keep up and then trying to slow down once they did as the band applied the brakes. This instrumental herky-jerky then settled down into a historic version of ‘Just A Man’.

After delivering an incredible, show-stopping half of ‘Just A Man’ the band continued to play while Mike Patton unexpectedly leaped onto a stage-hand rope-ladder. I say unexpectedly because the stage-techs had to dive out from the wings to anchor the ladder bottom while Patton began to climb. We all watched in wonder as Patton climbed up this swinging ladder with his microphone stuck in his mouth. He stopped a few times to sing properly and then swallowed the mic to throat-sing/hum the rest of the song as he sped up to ladder’s top a full 30 feet above the crowd. Once up there he finished out the song and then mentioned that he had gotten himself into a little trouble up there. Rather than quickly descend however, Patton asked the band for a strip-tease tune and slowly climbed down, while wiggling his ass in our faces and peeling off his shirt. The crowd howled as he tossed his shirt to the stage below and then he proceeded down to a less-than-graceful landing. 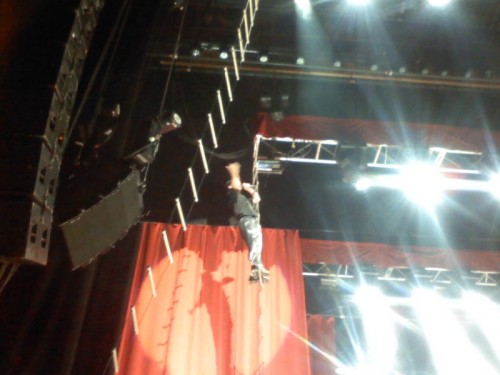 Faith No More offered up one encore which started with a surprising cover of Vangelis’ theme for ‘Chariots of Fire’; not just a few notes mind you, but a lengthy cover. This hilarious choice of song then blended into a soulful version of ‘Stripsearch’ followed by an energetic ‘Digging The Grave’ to finish the night. There was an odd moment when a second encore seemed imminent but it was fleeting as the house lights suddenly went up.

While walking out of the Mann Music Center, I talked to several fans about the show and the universal opinion was that Faith No More fully delivered on Saturday night. Not only did they entertain and amaze us; they took to that big stage and owned it with the huge sound that we had all been longing to hear again since Spring of 1998. Faith No More at the Mann Music Center in Philadelphia was without a doubt one of the best shows I’ll have seen in 2010.

* Rahzel and Mike Patton did a short tour of vocal improvs together in the early 00′s and they worked together on the Peeping Tom project.