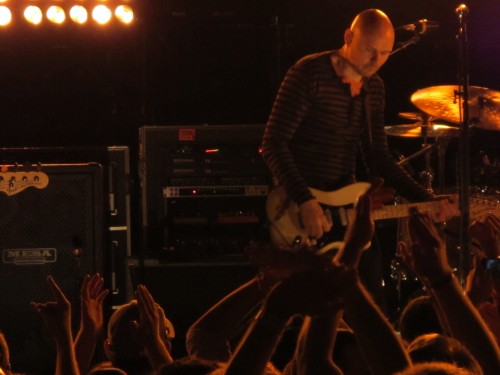 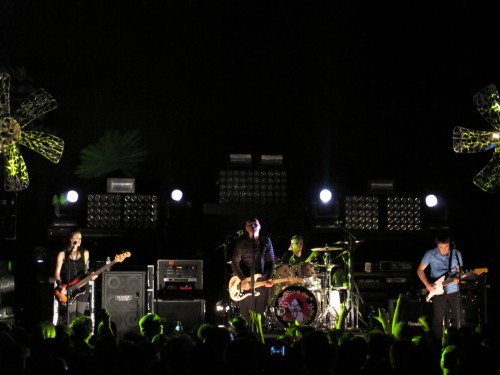 I am not one to immediately write-off a group just because the line-up has changed. Sure, an original line-up or the line-up when a classic was recorded will always hold a special place for a fan. But some band members moving on with their lives and being replaced by others is not always the disaster that many people make it out to be. Some bands have clear band-leaders and they are capable of making some magic with newer members just as easily as with the original core group. Page Hamilton is a great example of a wonderful talent operating under the moniker of his band Helmet for years after the original members left. He always assembles a great crew of support staff for every tour and never disappoints. I’ll admit that sometimes I find myself wishing for an original line-up reunion for nostalgia’s sake, but I am always pleasantly surprised by the consistent quality of Hamilton’s shows as Helmet.

Smashing Pumpkins were just a wee bit more successful than Helmet however, so I can see where the larger fan-base might also increase the numbers of those who would settle for nothing less than James, D’Arcy, and Jimmy. I am also sure that Billy Corgan’s shenanigans over the last ten years haven’t helped his cause either; between berating his fans, the extended timpani drum solos, and those awful Pink Floyd covers I would not blame anyone for jumping ship before attending Monday night’s Smashing Pumpkins show. For some, a Corgan-led team of session players just is not the same. For others, Corgan is an insufferable, ungrateful, whiner who doesn’t appreciate the very fans that lined his pockets with gold in the 90’s. For me, Monday night was a chance to finally see The Smashing Pumpkins; any version of The Smashing Pumpkins! Be it good or bad, great or awful, Monday night was my opportunity to cross one of my most-wanted bands off of my show list. 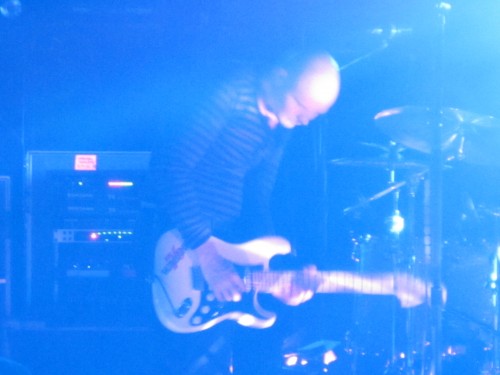 I never got to see The Smashing Pumpkins’ back in the day. I missed their development, I missed their heyday, and I missed their decline. “Gish” and “Siamese Dream” are two of the best albums of the late 20th Century in my book and yet I never got to hear anything from those albums performed live. Women are of course to blame. I had a ticket to one SP show in ’93/4 and I gave it away to a crying girl that I had a crush on. Later, I was at a Lollapolooza with SP set to headline, but I had to bail before they took the stage because the Mono I had caught from some girl was kicking my ass. A few years later, I had a ticket to the SP show opening the new 9:30 Club, but I didn’t get to go to that either; I was licking my wounds in New Jersey after a heart-shattering break-up.**

After that, Smashing Pumpkins started putting out lesser material IMHO and I lost interest in paying premium dollars for less than prime material. Fast forward many, many years and I decide on a whim to give Monday night’s concert a go. Tossing all the concerns I had out the window, as I drove up BW Parkway I decided that this was a chance to finally see some form of the Pumpkins and I had to take it. Even if the majority of the show was going to be a disaster, I had to at least allow myself the possibility of hearing ‘Cherub Rock’ played live once in my life. 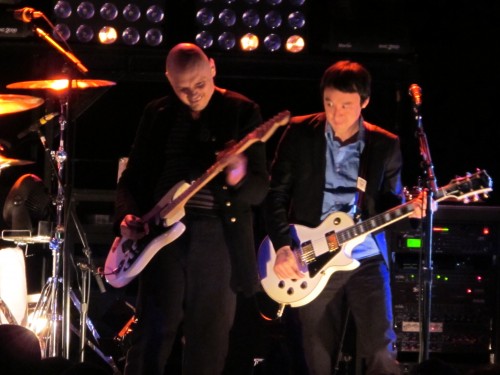 I am happy to report that on Monday night I finally got to see The Smashing Pumpkins; albeit a much different version of the band than the classic line-up we all know and love. The 2010 Smashing Pumpkins may be hired-guns but they played together like a real band. Corgan verbally stressed the point that this line-up is the new Smashing Pumpkins. He did so unnecessarily though. The band’s performance spoke for itself. Bassist Nicole Fiorentino, guitarist Jeff Schroeder, and the very young-looking drummer Mike Byrne all played their parts well. Maybe they lacked the charisma and presence of the original Pumpkins, but the new breed definitely brought some fine playing to the table.

I am also happy to report that I finally got to hear ‘Cherub Rock’ performed live! One of only a handful of classic Pumpkins’ tunes played on Monday night, ‘Cherub Rock’ was joined by ‘Today’ and ‘Hummer’ off of “Siamese Dream”; and ‘Bullet With Butterfly Wings’ and ‘Tonight, Tonight’ from ‘Melon Collie & The Infinite Sadness”. The lions-share of the set-list leaned heavily on the 2007 album “Zeitgeist” and the new internet project “Teargarden by Kaleidyscope”. I thought the set was constructed well even though it featured material that isn’t totally my cup of tea. For the most part the the new songs sounded great live and I was converted to their cause at least for the night. 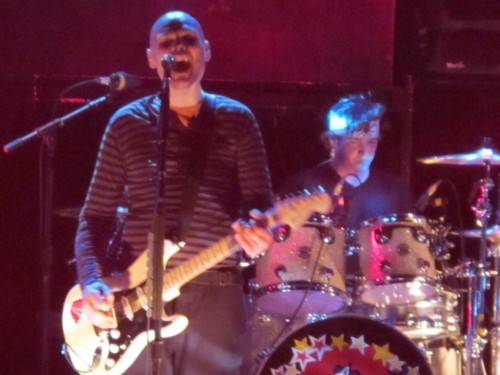 Of the newer material the highlight was definitely ‘Song for a Son’. All night I was impressed that Corgan’s still got the voice. On ‘Song for a Son’ he delivered his vocal knock-out punch. This song was the emotional peak of the show, I just wish they had dropped it a little later in the set. ‘Cherub Rock’ was of course fantastic live, but surprisingly did not provide the guitar pinnacle of the night. That was reserved for the revival of SP’s live-only, jam-tune ‘Gossamer’; which closed out the set with 17 minutes of sporadic vocals separated by epic gulfs of guitar annihilation. Perhaps the best song over-all on Monday night was ‘Tonight, Tonight’. Ending their main set with this near-classic, the song was perfectly timed to tap into the crowd’s energy and I think Corgan and company fed off of it to provide the closest thing to a magic moment of the night.

If I had one gripe musically about this concert it would be the two-song run of ‘United States’ and ‘Widow Wake My Mind’. This was lowest common denominator rock at its worst. The crowd was mightily behind these tunes, but they left me completely cold. By the time Corgan was doing his best Zach De La Rocha chanting “Revolution, Revo-lu-shon!” I was ready to choke myself out with the strap of my camera bag. 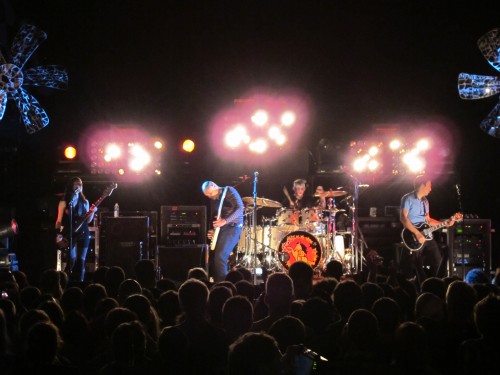 Unfortunately this wasn’t the only point during Monday night’s otherwise musically satisfying show that I was considering suicide. As I had read about and feared, Corgan had to open his mouth to address the crowd between songs. I think the guy can not resist it. His attitude on Monday was a weird mix of appreciation and contempt. I could not put my finger on it exactly but Corgan alternated between thanking the crowd for being there and then grouching about the weak download numbers of his ‘free’ online album. At one point he asked if he had to now pay his fans to listen to his music. Later when someone shouted out “where is the old band?”, Corgan responded by making fun of a completely different fan, who happened to be wearing a flannel shirt, by saying:

“It’s not 1994 mother-fucker. You’re still rocking that flannel though. Move on. We have.”

During another break, Corgan and Shcroeder belittled yet another fan for launching a (rowdy concert inevitable) spray of water over the crowd. Schroeder kept threatening to punch the fan in the face, while laughing and glancing over at Corgan who kept telling the fan to not make Schroeder mad. This was all mind-numbingly boring as were Corgan’s jokes about Iraq and Dick Cheney.*** 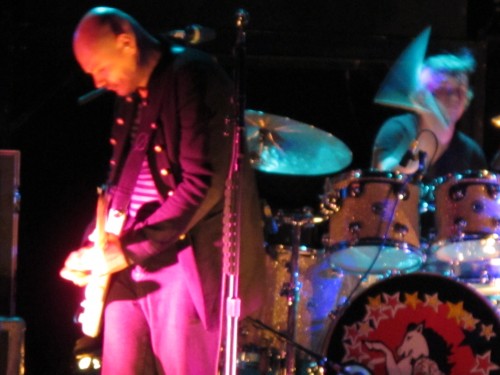 Musically Monday night’s show was a lot of fun (minus the two songs I mentioned). I was actually impressed with a good number of the new songs they played and I will listen to the majority of “Zeitgeist” with new ears. I finally got to experience a handful of “Siamese Dream” songs and the amazing ‘Gossamer’ performed live after all these years. And I am still humming their truly awesome version of ‘Tonight, Tonight’. Normally I would call that a successful show, but Corgan’s weird interaction with the crowd all night really holds it back. Billy ended the show alone on stage signing autographs for some of his fans. This was a seemingly nice gesture but as I sit here typing I wonder: was he doing that for the fans’ gratification or for his own?

** The break-up girl and the crying girl are not the same girl. The super-cool woman who would become my wife attended the new 9:30 Club opening night SP show though. An exclusive event that she lords over me all the time.

*** Note to Billy: It’s Afghanistan and Biden now, update your jokes. Or better yet, “shut up and play some fucking music” as a fellow audience member put it mid-Corgan Ukulele threat.