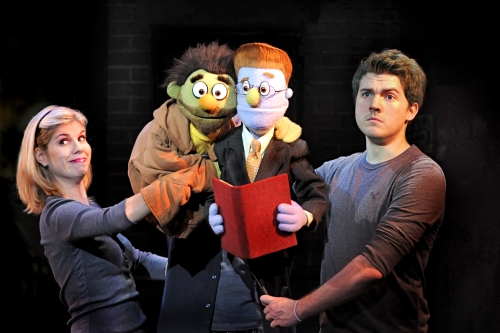 Lately I’ve been afflicted with strong bouts of nostalgia. Thinking back to my time in college, wishing I had done things differently, the sort of typical mid-twenties angst. For those of us who may still be unsure of what we want to do with our lives, Avenue Q is a musical that will hit home. It will also strongly remind you of a bygone era—the early 2000s. It is also the only musical with fully nude puppets having sex on stage. It has been called Sesame Street for grown-ups, which is a accurate description. Avenue Q opened at the Lansburgh Theatre last week, and is unique and entertaining look at angst-filled life in the big city. 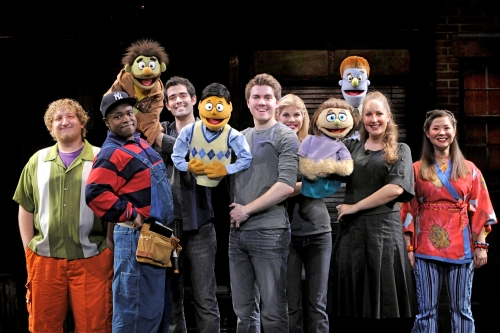 The actors do an excellent job with presenting both human characters and the puppet characters. The set-up is challenging—the puppet character and the actor providing the voice are both on stage However, the performance is seamless and the audience quickly melds the puppet and actor into one solid character. Within moments of the opening scene, it feels natural and is easy to follow.

The plot is somewhat predictable—Princeton and neighbor Kate Monster fall in love, Princeton experiences a quarter-life crisis, breaks off the relationship and hooks up with Lucy the Slut (Grabois), a former Girls Gone Wild star. We also follow Rod’s struggle to get out of the closet, which leads both to conflict with roommate Nicky, and the hilarious number “My Girlfriend Who Lives in Canada.”

The biggest criticism of the story is that it strays from its focus on life as a confused freshly-minted “adult.” The show is at its best when the jokes and dialogue are more understated, such as with the awkwardness of dating—including whether a mix-tape is a sign of affection, and the hilarious “Princeton you are such a gentleman”, “You too, Kate Monster” exchange. As the second act unfolds, however, it becomes clear the ending will be more deus ex machina and less accepting the depressing reality of grown-up life. The story is wrapped-up in a nice neat ending with plot holes big enough to ride a snuffaluffagus through.

Avenue Q is now seven years old, and it’s beginning to show its age. The songs are still very entertaining; however some of the topics that could have once been considered edgy now seem cliché. The song “The Internet is for Porn” immediately comes to mind, as well as the references to Girls Gone Wild. While some fresher references have been added, such as Glen Beck, they seem awkward and out-of-place. Never fear, though, there are timeless classics such as the opening number “What Can I Do With a B.A. in English,” as well the heartbreaking love song “There’s a Fine, Fine Line.”

The use of puppets certainly evokes Sesame Street—a way to present important life lessons in a digestible and often lighthearted way. Unfortunately, the life lessons as we get older are much more depressing than the “everyone is special” manta of childhood. The audience expects a more-or-less feel good story from the cute puppets—when the lessons are harsh, they are all the more powerful. The audience feels at ease letting their guard down to a puppet-led ensemble, allowing for a frank discussion of race, romance, purpose and sexuality. This is why Avenue Q has been so successful, and why it’s much more than just funny and raunchy puppet show.

All told, Avenue Q is a well-acted and well-produced show. Audiences of all ages can take something away from the performance. Younger people, especially those just now graduating from college, may find some of the jokes and songs to be outdated, perhaps even “old.” For those of us in their mid-twenties or later, you’ll leave the theatre feeling like Princeton at the end of the show—a bit older and wishing you could pass the lessons on to your younger-self.

One thought on “We Love Arts: Avenue Q at the Lansburgh Theatre”