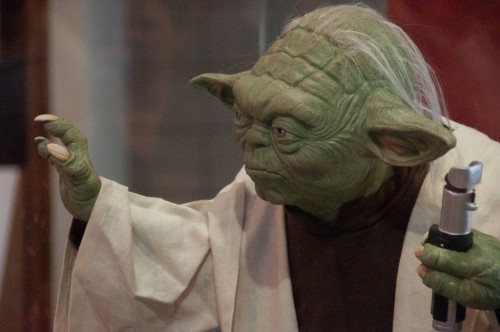 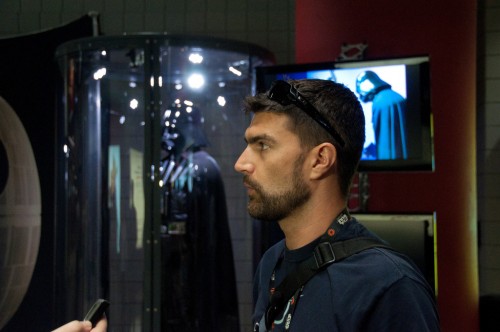 WLDC: How many pieces are in this touring exhibit?

WLDC: Where are all of these pieces and Star Wars artifacts in general normally stored?

Iskra: At Skywalker Ranch, which is in Northern California, we have a huge archive building that houses everything. From concept art, where it begins, to the models, maquettes, stuff that didn’t make the films. We’ve got costumes, we’ve got props, we’ve got ships. We’ve got, you know, not just Star Wars, but Indiana Jones and all the George Lucas films. 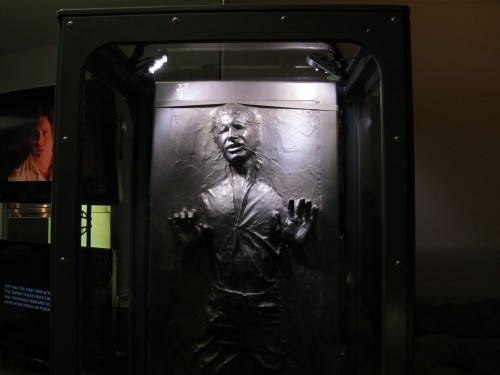 WLDC: With so much to choose from, how did you pick which items to include in this exhibit?

Iskra: It was a little bit of a challenge when we put all this together because there were other exhibits going out. So it’s kind of a “hey, we want that” and somebody else wanted that too. We kind of fought to get the stuff we wanted. And then next step, the real challenge was, we found a lot of items we wanted to take, but then we had to figure out, well, can it travel? Can it withstand a hundred, two hundred shows, traveling around the world? Because, we kind of beat this stuff up quite a bit coming in and out of these buildings.

WLDC: What were your “must have” items for the tour?

Iskra: We had to have a Vader. We had to have Chewbacca. We had to have 3PO because Anthony Daniels is in the shows. So we had to have those iconic images or items. And then I went and chose some cool blasters, and some kind of off to the side characters, like Kit Fisto and Plo Koon for the more diehard fan, who you know, has already seen Vader. 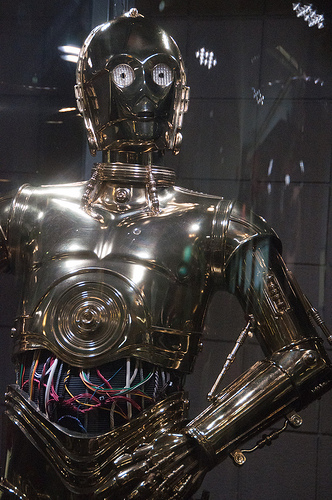 WLDC: So was everything in the exhibit actually used in the films?

WLDC: No replicas then?

WLDC: Some of these items are quite old and as you mentioned well-traveled. Did any of the pieces require restoration before you took them on the road?

Iskra: No, most of the stuff was in already good condition. You know, the archive team back at the ranch does a really good job. The process for us was building the cases. So we have custom built cases, and then coming up with really unique ways to transport each of the items. You know, guitars and instruments already have road cases, Darth Vader doesn’t. So we had to invent this like weird, cylindrical case, and this case goes into a big metal cage. And then, the way that we secure everything and tip it over to get it in and out of the concourse every night, that’s what we had to invent. 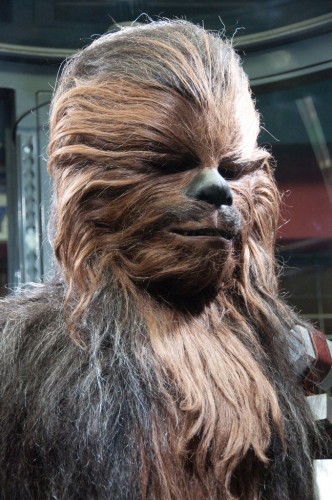 WLDC: How long did it take to prepare this tour?

Iskra: Well, the overall tour, the idea of the show is about four years old. Getting everybody on board: you had to get John Williams, you had to get George Lucas, Another Planet Entertainment Touring, they’re the company that put it together. So, getting all those pieces together and then figuring out, well, what is the show? Coming up with the screen concept, and just the stage and the lighting took several years. And then, this took, this was kind of being done along-side the main stage show. And then, we spent several months building everything. We took it to London and we spent several days dressing the costumes, dressing the mannequins.

WLDC: Why did you choose to open in London?

Iskra: You know, a year and a half ago, it was like the place to be. We opened up at the O2, this big arena. We wanted to test the waters. They took it overseas. We came back and did a U.S. tour in the fall and this is our second U.S. leg. 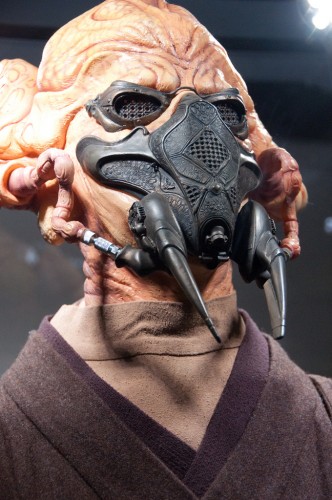 WLDC: In the late 90’s the Smithsonian Air & Space Museum here in DC had an exhibit called “Star Wars: The Magic of Myth”…

Iskra: I flew out, I came down here…

WLDC: You were involved with that?

Iskra: No…no…I was a kid and I came down to see it!

WLDC: (laugh) Oh, that’s great! Well, as you know that exhibit had a particular theme exploring the use of myths in the original Star Wars trilogy. Is there a theme that you are working with for this touring exhibit?

Iskra: The theme we were kind of working with here was more of a, just kind of bringing all 6 films to life, because, when you see the show, you know, there’s 12 hours of music to choose from and 12 hours of footage to choose from. So they kind of chopped it up, and kind of streamlined it. And that’s what we did. So we have characters from both prequel and the original trilogy. And then, like I said, we have the iconic stuff, we have the, you know, lesser known stuff. It kind of drives that point home, really makes it a multimedia experience. 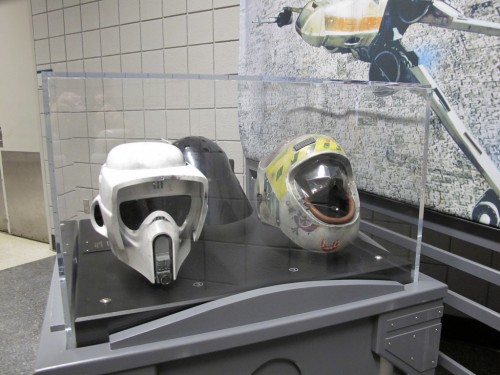 WLDC: Has this exhibit taken on a life of its own?

Iskra: Yes, you know, obviously, when they had this whole idea. We were really nervous when we opened in London. We were kind of like, “is this going to work?”, “do we need this?”. And as you can tell, we’ve got all these people around us, they’re are really excited to see it. I take for granted that I see this stuff everyday, I’ve been working for Lucas Film for years. You know, your average person doesn’t get to see a Darth Vader or a Chewbacca costume up close. So when you see them kind of light up, you see the kids get excited. Usually the parents are more excited than the kids. 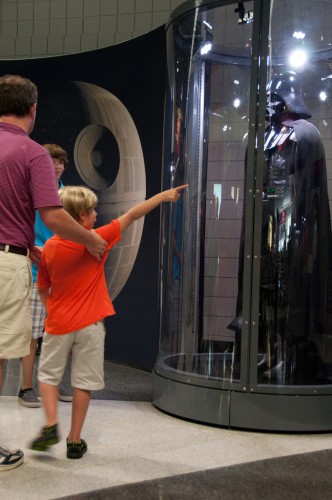 WLDC: Do you have a favorite piece in the exhibit here?

Iskra: I really like the Biker Scout helmet. As a kid I always wanted one. They didn’t really sell a wear around helmet. I see all the kids now have all the cooler toys than I had when I was a kid…so, I’m a little jealous of the little guys here.

WLDC: Okay. great. Thank you for your time David.

Iskra: Sure, thanks a lot.

Check back here at 3pm for my review of the concert portion of Star Wars: In Concert. 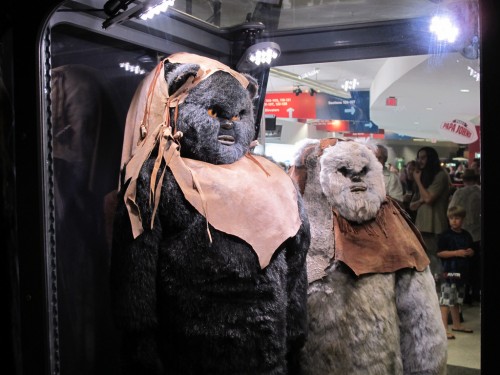 4 thoughts on “An Interview with David Iskra, Star Wars: In Concert Exhibit Curator”