When I was in tenth grade, my best friend and I used to get together almost everyday after school to play Street Fighter II or Shadowrun. Before we settled in for some serious gaming, we’d watch Yo MTV Raps, which he tapped from MTV the night before. At some point he was on punishment and forbidden from watching that show. So instead of warming up with videos, one day he busted out his cassette of Public Enemy’s latest album “Fear of a Black Planet”. It instantly became the soundtrack of our friendship. We listened to it a lot. I mean so much that it was bordering on brain-washing. At some point, he was punished again and wasn’t allowed to listen to Public Enemy. So he let me borrow his copy of “Fear…”, because, at the time, I seriously couldn’t live without it. After that, he and I sort of co-owned “Fear of a Black Planet” until senior year of High School. It was a beautiful thing, one of my best memories of our friendship, and lent “Fear of a Black Planet” a personal importance for me that mirrored its landmark status in music history.

As much as I love Public Enemy and “Fear…” in particular, over the years I have never seen PE perform live.* So when it was announced that Public Enemy were making their return to the 9:30 Club and that, to mark the album’s 20th Anniversary, PE would be performing “Fear…”, I got so excited that I literally had to step out of the office onto 14th St. to prevent myself from shouting out in victory at work. Sometimes the stars just line up. I knew this concert was going to be great before I even attended. Finally seeing the elusive Public Enemy, performing my album, at my favorite venue? Insanity. I couldn’t have planned better circumstances myself. Little did I know that the great Public Enemy would soon far surpass my every expectation. From the get go, it was obvious that PE were not going to play “Fear…” in order and possibly not in-full at all. They were mixing it up right off the bat. And I felt a twinge of disappointment up front. I have been to a lot of in-full album shows lately and they are fantastic.** Watching a band, usually enhanced with extra musicians for the task, challenge themselves by playing a full album (with older, sometimes never performed tracks) is a special treat. So, yes, up front I was a little disappointed when they started to mix it up. “Fear of a Black Planet” is one of the most sonically complicated hip-hop albums ever. It is a work of collective genius and, to be honest, all week before the show, I was skeptical that it could be recreated in-full at a live show. Early on in the show, it was looking like I might be right. Last year, Public Enemy did a similar tour performing “It Takes a Nation…”, their other seminal album. Between “Nation…” and “Fear…”, PE hold the title having perhaps the two most important hip-hop records ever. So, when I say I was a little disappointed when I realized that technically they weren’t doing “Fear…” in order on Saturday night, I also have to say that this feeling dissolved just as quickly as it came when I realized how lucky we were to be hearing songs from BOTH albums. As the concert progressed, PE seemed to be live shuffling “Nation…” and “Fear…” within their dizzying, powerhouse performance. We were in the fortunate position to have Public Enemy currently, well-rehearsed on both albums and they were laying down the law by ripping into hits and live-obscurities from both. You want ‘Terminator X to the Edge of Panic’? We got it! You want ‘Burn Hollywood Burn’? We got that too! What DC got on Saturday night was so much better than what I had been expecting. A technically precise performance of “Fear…” would have been cool to see, but it is obvious to me now that it wouldn’t have been representative of Public Enemy as a performing group. “The Public Enemy Show” (as they like to call it) is a stage-filling, energetic, living, breathing, unpredictable creature. All night the set-list veered off unexpectedly like an out-of-control car. Chuck D and Flavor Flav introduced songs or song-sequences with anecdotes from the band’s history, political soap-boxing, and dedications. With each introduction, the crowd erupted as they realized what song was being unleashed on them. 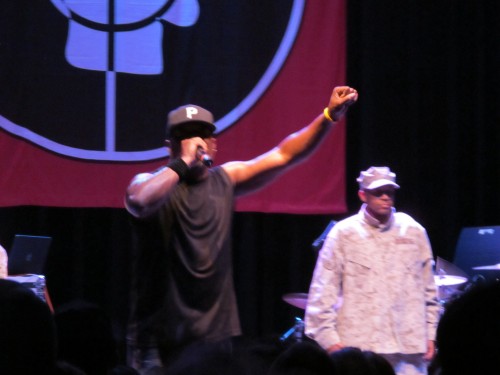 One song that isn’t from “Fear…” or “Nation…” but I was hoping they would do is ‘By The Time I Get To Arizona’. It is just nuts to me that from 1991 to 2010, f*cked-up situations in Arizona still prevail to keep songs like this relevant.*** Chuck D gave this song the fiery intro it deserved before the band launched into it. But then, moments after they started, Chuck stopped the song, instructed the band to slow it down, and then proceeded with his rap at medium-speed; so that his words could really be heard, allowing their impact to fully sink in. The whole night was like that, the show would get tweaked right in front of our eyes. Band members, including Chuck would do 10 push-ups if they screwed up their part. Which happened maybe 3 times in two and a half hours; mighty impressive considering the thousands of lines of lyrics and hundreds of planned stage movements. At one point during ‘Don’t Believe the Hype’ Chuck turned the microphone over to a fan to finish his part. It wasn’t smooth, and dragged the song out, but made for one of the funniest moments of the show.

Flavor Flav and Chuck D moved around the stage and interacted with each other like they were telepaths or something. Their straight-man and joker routine is a classic but what I had never realized until Saturday night was how close these guys must be. It was like watching two best friends or brothers doing what they love. I was particularly impressed to see Flavor Flav unleashing some real talent up there. All of his television shenanigans are like the hyper-real version of on-stage Flavor. In concert the guy is working just as hard as everyone else; jumping and dancing, rapping, and even drumming for a spell. Always the good time guy on-stage, but also a performer to be respected. Flavor is just as much Public Enemy as Chuck is. For a few years I had forgotten that, Saturday’s show was the reminder I needed. Saturday night’s show was amazing. I can’t think of a better hip-hop performance that I have seen.**** That said, I found it really odd that this wasn’t a sold out show and that there wasn’t a bigger hip-hop crowd. The crowd was mostly college kids and office drones. Has “Flavor of Love” really done that much damage to PE’s rep? Is it their politics that turn people away? Or the lack of commercial support? I don’t know the answer. I do know that Saturday’s show deserved to be seen by more people. Those who were there, and stayed for its entirety, received a spectacular show from music legends as they covered their two best albums and then some.

— This review is dedicated to my old buddies: Christen Gallo and Scott Daniels. 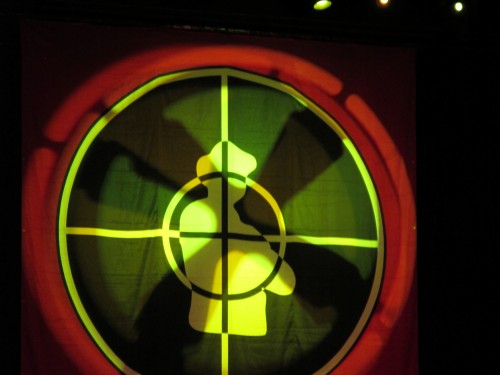 * Either circumstance of life prevented me from attending (poverty, work) or the circumstances of a particular show turned me off (ie: venue sucking, Terminator X leaving, or “Flavor of Love” turning me off).

** The high-point of in-full shows so far this year has been Spiritualized at Radio City Music Hall performing “Ladies and Gentlemen, We Are Floating in Space”. My brain is still processing that one. It was so spectacular I can’t find words to do it justice in a write-up. Spiritualized at RCMH is tied with Sonic Youth recreating “Daydream Nation” in Chicago for best full-album set of all-time (so far).

*** Public Image Limited also had a “return to Arizona” moment when they played their song ‘Bags’ in DC earlier this year.

**** Maybe it’s my inner fan-boy talking but in my opinion these guys leveled Jay-Z.