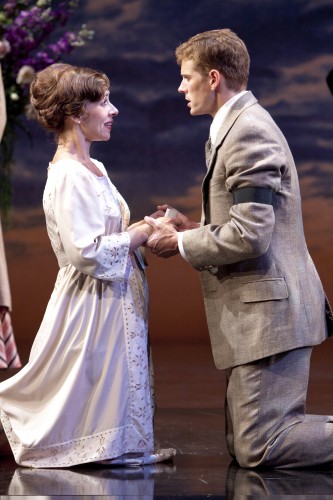 Miriam Silverman as Helena and Tony Roach as Bertram in the Shakespeare Theatre Company’s production of All’s Well That Ends Well, directed by Michael Kahn. Photo by Scott Suchman.

With only a few minor exceptions, The Shakespeare Theater Company’s production of All’s Well That Ends Well hits every note and does so with beauty and style. The question is, is that going to be enough to make it work for a modern audience?

If you’re not familiar with the work – which, to borrow a joke from the hosts at Filmspotting, is “Minor Shakespeare” – All’s Well tells the story of a woman of common birth who loves a nobleman. Through plucky resolve she gets the King to grant her a boon – her choice of husbands. When she picks the object of her affection he rejects her, fleeing France to fight in a foreign war and vowing not to return so long as he has a wife to return to. There’s a very Shakespearean bit of shenanigans along the way and in the end he sees the error of his ways and he accepts her.

So we’ve got a stalker, forced nuptials, class divisions, a sleazy hymen-chaser, a sort of rape by substitution, and, as such things usually lead to, eventual love and happy marriage. How’s that working for you? 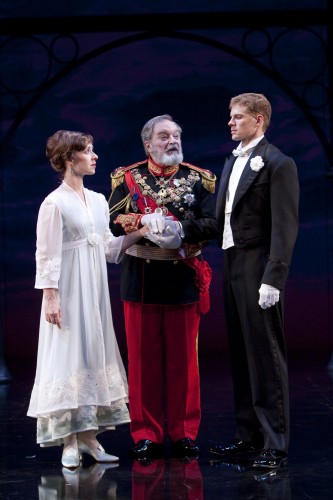 Miriam Silverman as Helena, Ted van Griethuysen as the King of France and Tony Roach as Bertram in the Shakespeare Theatre Company’s production of All’s Well That Ends Well, directed by Michael Kahn. Photo by Scott Suchman.

It’s not STC’s fault the work is difficult for a modern audience, though I suppose they could have opted not to play it straight. Even if you put aside our western culture’s difficulty with arranged marriage and our resistance to the idea that one should subjugate to the will of a monarch, you’ve still got to accommodate the fact that Count Bertram is kind of a douche who does a sudden reversal at the last second.

What exactly is the appeal of this jerk? In the early stages Helena waxes poetic about his physical attractiveness and that’s a fine basis for a crush, but her pursuit takes her past that point. Eventually she has to use his pursuit of another woman’s maidenhead as a tool for her to hook him and force his acceptance of her as his spouse. Well shoot, who wouldn’t want such a man? Miriam Silverman does a nice job with the material, playing Helena as someone who makes a transition from a reluctant suitor in the beginning to a determined conspirator by the end.

If you spend a little time with the STC’s articles about the play you’ll find they’re looking to emphasize the aggressive nature of Helena in pursuit of a man, something 18th century audiences had a problem with. Fine, though if you’re going to talk about the ways in which the play was ahead of its time it seems that you should give some attention to the ways in which it is firmly rooted four hundred years in the past. If nothing else, consider what it would be like if the roles had been reversed and how we’d really view a male character who came to a woman’s bed and had sex with her while pretending to be someone else. It’s hard to blame Helena for the ways in which she needs to be mercenary to deal with Bertram’s behavior but there’s a lot of uck wrapped around this ahead-of-its-time tale of a woman who goes after what she wants.

Modernity issues aside, the incidentals in the play are delightful. Michael Bakkensen as the slimeball Parolles and Adam Green as a clownish servant get to chew up the scenery and toss bon mots with abandon. The usually very good Ted van Griethuysen is flat-out superb as the King, and he gets good material to work with since he runs the gamut from morose invalid to fiery monarch. And yes, that is Paul and Jaime’s snooty neighbor, Paxton Whitehead as Lafew, and his ability to deliver scathing put-downs hasn’t lost its edge.

There’s a lot of humor in this play – when it’s not being creepy – and everyone called upon to deliver a zinger or a deadpan bit of snotty does it perfectly. Everyone acquits themselves well in the straight and dramatic moments as well, though one lead stumbled over lines twice and another relied rather obviously on a certain affectation to convey an emotion. Minor kinks, though ones I’d have expected to have seen ironed out by press night.

Do I need to tell you that the STC put a beautiful set up on stage, lit it wonderfully and costumed everyone to perfection? It’s pretty much a given at this point that, no matter what else, it’s going to be pretty at the Landsburgh or Harman. This production is no exception. Some special attention should be paid to composer Adam Wernick for well-used music; I presume he was the person who penned Diana’s cute little song that was added in front of act 4 scene 2.

If you’re up for some old-school work and prepared to put on your classics hat and view it through the lens of its age you’ll find All’s Well That Ends Well worth your time. If you’re going to have an issue with character motivations that seem foreign in 2010 it may not be the play for you.