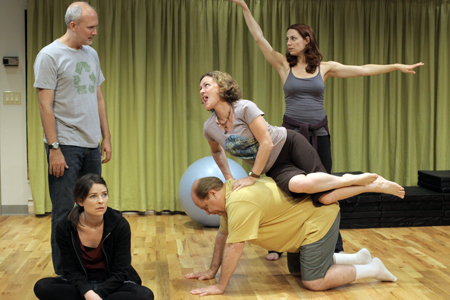 Finding humor in the mundane lives of others has been one of the key reasons why shows like The Office and Community are hits. A show about the 9-5 of a workplace is something we can all relate to. Community created a small-town, village feel within the student body of a community college. Annie Baker’s Circle Mirror Transformation plays along similar lines except for one key difference: characters.

While Steve Carrell and Joel McHale play larger than life characters on their respective shows, the ensemble cast of Circle Mirror Transformation wouldn’t draw a glance if they were next to you on a Metro car or in line with you at Safeway.

Marty (Jennifer Mendenhall) is a free-sprit type who teaches a drama class at the local community center in Shirley, VT.  Among her small group of students is her husband James (Harry A. Winter); Schultz (Jeff Talbott), who’s recently been separated/divorced; Theresa (Kathleen McElfresh), a former stage actress; and Lauren (MacKenzie Meehan), an angsty teenager.

The idea of an ensemble of random types is formulaic and should be expected with any television sitcom; however Baker and director David Muse manage to keep the premise from going down a predictable path and instead roots the show with a sense of naturalism that turns the audience into a fly on the wall. Watching the group go through class wouldn’t be any different from any other class we might have taken in college or in the community.

And that’s how the show succeeds.

Baker paints the perfect portrait of the stereotypical New England small town, the boring of the boring. However beneath the polished layers of civility are real problems and drama that burst out in subtle, yet noticeable ways.

Mendenhall drives the show’s humor as she tries to teach her class called, “Adult Creative Drama” without any scripts, readings, or monologues. Instead the group spends night after night playing theatre games and exercises that emphasize intuition, communication, and awareness. In a fitting moment Lauren calls her out when she questions, “Are we going to be doing any real acting?” In truth the class is about acting as much as airborne is a cold remedy.

Instead of learning how to act and become someone else, each student learns to become more comfortable with themselves as they struggle with their problems. Halfway into the show you realize you aren’t watching an acting class but a group therapy session.

The story of each character is told not just through their words, but the words of his/her peers. Baker cleverly boils down the entire show into a theatre game for which the show is named after. You won’t find over-the-top antics or melodrama but you will still be drawn in as the characters try and navigate through a life that is far from storybook.

There are always challenges with an ensemble show like this one to spotlight individual characters but the show pulls it off, albeit to some mixed success. I wasn’t satisfied with Lauren’s lack of development at the end of the show. Perhaps it’s my aversion to angsty teenagers but despite hints of a potential crisis for her- nothing really happens with it.

In his first show as Studio Theatre’s Artistic Director, Muse produces a humorous yet powerful magnifying glass that focuses on the subtle conflicts within our daily lives and shows that drama can lie among the sleepiest of communities.

Circle Mirror Transformation runs til October 17th in Studio Theatre’s Mead Theatre. You can get complete information at Studio’s Website, however I will make a note that the show runs 1h45m without an intermission- so be prepared.