Although I’ve never been to Cuba, I am fairly certain that Cuba Libre Restaurant & Rum Bar doesn’t scream authenticity. The restaurant’s interior, styled as an open air piazza, feels like the Epcot version of Havana. The plaster is artfully peeling in all the right places. At any moment, a mechanized figure from “It’s A Small World After All” could pop up from behind the false windows and burst into song. But like all things Disney, Cuba Libre is a happy, cheerful place. Maybe it’s the Latin music wafting from the background. Maybe it’s the rum. Either way, the restaurant has a lively, summery atmosphere that should be welcome as winter sets in.

With locations in Atlantic City, Orlando and Philadelphia, Cuba Libre’s recent opening marks the chain’s first foray into Washington. The restaurant has made its name on “nuevo Cubano” cuisine, and dishes borrow heavily from Asia, South America and the Caribbean. More than half the menu is devoted to small plates (ranging from $5 to $13), though classic and contemporary entrées ($16 to $32) are available for those who are morally opposed to tapas. 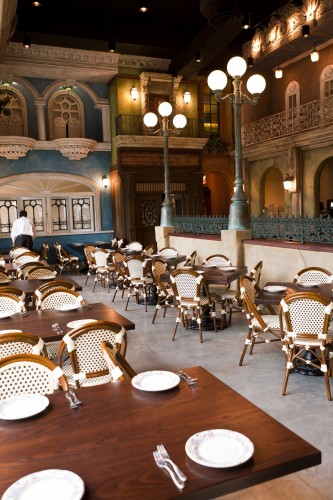 On the two occasions I ate at Cuba Libre — once with a friend and once for a preview — I stuck with the small plates for maximum taste testing. Of the 14 dishes I sampled, only two were notably underwhelming. Both the Atún Africano (charred tuna) and the Pato Ahumado (smoked duck) were somewhat flavorless, and lacked the depth that most of the other dishes offered. But it was all uphill from there. In particular, the beef and pork dishes stood out as among the menu’s best. The pulled pork empanada was stuffed with sweet, tender meat and enveloped in a buttery, flaky crust. The Cochinito Chinito-Cubano (rum-glazed pork belly) was light on fat and heavy on melt-in-your-mouthness. The real showstopper was the Arepa Rellena, a corn cake filled with short rib and mozzarella. It was the perfect balance of sweet and savory, with melted cheese oozing out in all the right places. The Cesar de Oriente, a short rib spring roll, was also delicious: not too oily and boasting subtle, complex flavors.

Other favorites included the Buñuelos de Espinaca, whose fried crust gave way to a wonderfully creamy blend of spinach and Manchego. The Yuca Frita (cassava fries) were also great though quite starchy: I found it difficult to finish the entire serving though I wanted to. The seafood dishes were very good, but carried less of an impact. The crab cake and scallop and tuna ceviches were fresh, meaty and creative. But still, they are not the dishes that I’ve been wistfully craving. 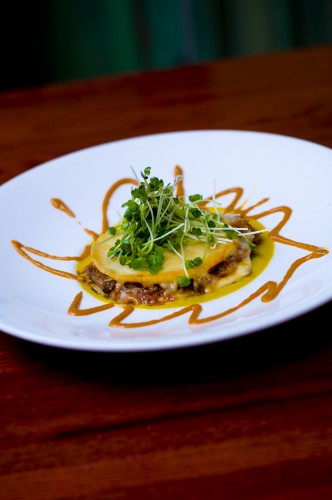 Of course, Cuba Libre is not just about the food. The restaurant prides itself on its 74 varieties of rum, six of which are produced under the Cuba Libre label. If you’re new to the scene, you can sample a flight of the restaurant’s 5, 15 and 21 year rums, which offers an easy introduction to the nuances of the aging process. The rest of the rum list consists mostly of aged spirits, with roughly a dozen whites, golds and darks mixed in. We sampled a few of the more unique varieties, including a chocolatey, nutty Pampero that was perfectly sippable — a great after dinner drink. There was also the Rogue Hazelnut Spiced Rum, infused with Oregon hazelnuts, orange peel and vanilla bean. It tasted like Christmas in a shot glass, which is a very good thing.

If you can’t shoot rum straight, there are plenty, plenty of cocktails to choose from. Mojitos are the specialty (there are 14 on offer), but over two dozen tropical drinks, caipirinhas, frozen concoctions, sangrias and beers are also available. Many of the drinks have been created exclusively for Washington, including the Beet and Basil Mojito (a sleeper hit) and the Miami Hurricane, which is an uncanny re-creation of Hawaiian Punch. Only order it if you liked the stuff as a kid. 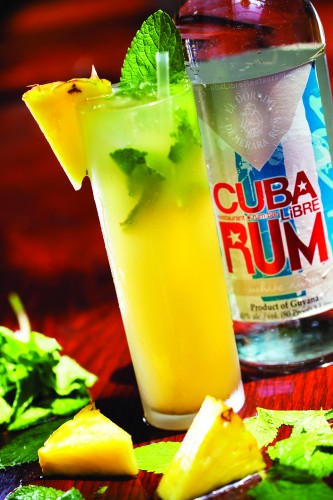 A few other drinks were sampled in the name of research. The mint in the Grilled Pineapple Mojito cut the fruity sweetness nicely, and the spiked Cafe Cuba Libre quickly won over my coffee cocktail-loving heart. The only drink I tried that could use a little tweaking was the Mango Ginger Martini, which needed a bit more ginger to reign in the mango’s sticky sweetness.

If you’re planning on checking out the restaurant in the coming weeks, you might want to visit on October 28, when the restaurant will donate 100% of all dinner food sales to the Trust for the National Mall. Can’t make it? Don’t worry— your appetite is as worthy a cause as any.