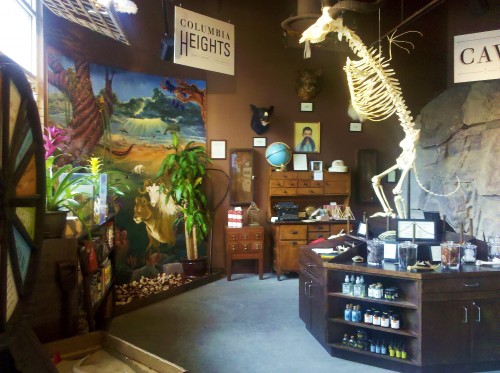 Entering the new Museum of Unnatural History is like stepping into a hybrid realm of Harry Potter and the Old Curiosity Shop. An “homage to fictional scientists,” the small space is crammed with whimsical, highly entertaining “artifacts,” including Saber Tooth Dental Floss, Unicorn Burps and a plaque of the World’s Best Noses. If Darwin had explored Narnia and not the Galapagos, this is what his treasure-stuffed study might have looked like.

The Museum is the wacky retail storefront of 826DC, the local chapter of the national writing center founded by bestselling author Dave Eggers. 826DC began its life in 2008 as Capitol Letters Writing Center, and officially joined with 826 in February 2010. The new space, located on Columbia Heights Plaza, provides a permanent home for the non-profit, which aims to enhance the creative and expository writing skills of District students. Until now, the organization has operated out of coffee shops, libraries, schools, and wherever else volunteers could scrounge up space. Although the majority of 826’s writing workshops will continue to take place in classrooms, the Columbia Heights location — which officially opens tomorrow — offers a fixed spot for after-school tutoring, field trips and evening and weekend writing workshops. 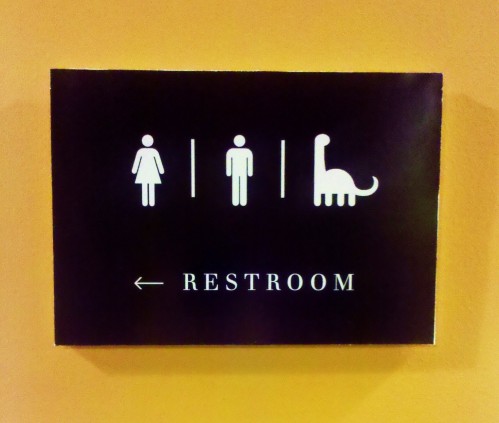 Dinosaurs are welcome at 826DC / Photo by author

Although all 826 branches boast creative retail stores — New York has the Brooklyn Superhero Supply Company, and San Francisco the Pirate Supply Store — Washington’s is perhaps the most inspired. Deputy Director Joe Callahan says the idea behind the Museum is “to show that the world is as strange as we imagine it to be…We want to get the kids asking questions.”

Mission accomplished. Much of what is for sale are brilliantly repackaged household items, whose clever text show just how far the imagination can stretch. Toilet paper becomes a Field Journal, “for when you have to go write now.” Mallets are Beetle Catchers, necessary because “using your hands is gross.” Bottled glitter becomes Unicorn Tears (available in both small and bulk sizes), and Formal-Dehyde, Semi-Formal-Dehyde and Business Casual-Dehyde are available for all your taxidermic needs. The centerpiece of the museum is the skeleton of a fictional creature, made from molds of various animals’ bones. Students will have the opportunity to name the creature and determine its species. 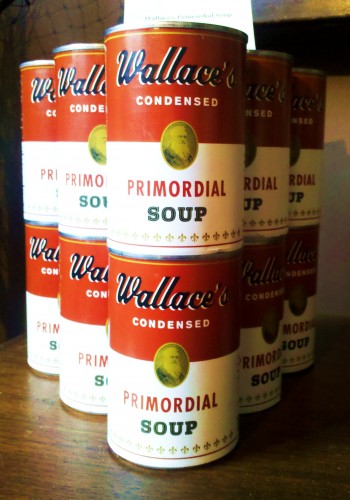 In back is the tutoring space and library. “We didn’t want it to feel like school,” Callahan says, explaining the colorful carpets, sleek wood furniture and lime green walls. This section offers 15 Mac Books for student use, a cozy reading lounge, and several “doors to no where,” inspired by the functionless fake drawers that are inexplicably found in every American kitchen. The tutoring space is also available for class field trips, which take students through the full process of book production in the span of two hours. They brainstorm, write and edit while volunteers work on typing, illustrating, printing and binding. Using what 826DC program manager Mike Scalise calls “technology and love,” students are able to leave with a tangible, finished product in their hands. 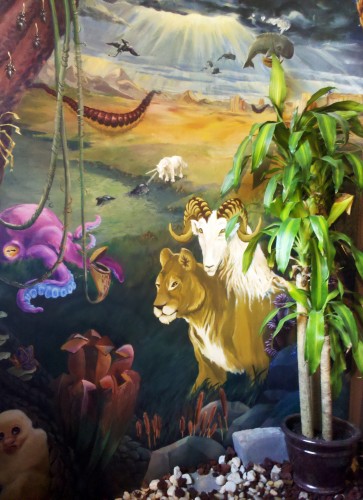 Mural of Columbia Heights, circa 3200 BC / Photo by author

With the opening of the new center, Callahan says he hopes 826DC will expand its reach by threefold. Since 2008, the organization has worked with over 1,000 students, and has published two anthologies of student writing, both of which are available for sale at the Museum. A third anthology will be published at the end of the school year following year-long projects at Cardozo and Wilson High Schools.

If you fancy yourself an unnaturalist, you can stop by 826DC’s open house tomorrow from noon to 4:00 p.m. Regular business hours for the Museum are from noon to 6:00 p.m. daily.

3 thoughts on “Museum of Unnatural History, Where Wacky Meets Wonderful”