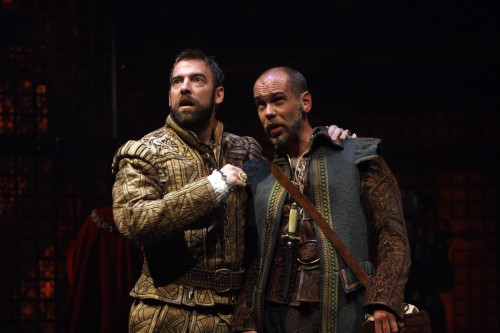 However Henry VIII is a seldom performed play. The dramturg’s notes acknowledge that the show has a run of bad luck- it’s the show that caused the fire that burned down the original Globe Theatre. The show is so rarely performed that The Archdiocese of Canterbury wished the Folger Theatre best wishes on its production, commenting that they don’t see it done in England enough. Henry VIII is a very well executed piece and makes great attempts to connect with the audience, but falls short with a story that fails to leap off the pages.

The failure isn’t in the elements of the story, in fact there’s quite a few ingredients here for a moving drama: a power ruler in King Henry VIII, a conniving antagonist in Cardinal Wolsey, and a sordid romance between King Henry and his mistress Anne Boleyn. Add in a fantastic light design by Klyph Stanford and a moving sound design by Anthony Cochrane and Henry VIII should be a solid production.

There isn’t any fault with the acting, Ian Merrill Peakes gets the job done as Henry VIII and the highlight of the show is Louis Butelli’s performance as Will Sommers. A character created for this particular production, he captures the attention of the audience every moment he is on the stage. In his multi-faceted role he acts as the storyteller or as one of the many smaller roles throughout the play.

The problem is that it’s Shakespeare. I consider myself an educated man and it isn’t that I couldn’t understand what was going on- I could piece together the rough story among the long soliloquies and antiquated language. It’s just that when you are busy figuring out what’s going on, it’s hard for a piece to be compelling enough to evoke an emotional response.

I know I wasn’t the only one who felt that way. The woman next to me was asleep well into the first act as well as some patron in the rows right of me. Some of those faces were notably absent after the intermission.

I want to make it clear that this was a well executed production. The technical elements created sense of drama that I wouldn’t imagine with a typical Shakespeare production. The pacing of the show was quick and kept events moving, even though you might not fully know what’s happening. Perhaps if I read up on the piece beforehand I would have gotten more out of the performance. Coming from the regular Joe view however, that says something if you have to do homework before you can fully appreciate a work.

Shakespeare fans and theatre aficionados will fully enjoy Henry VIII and will be intrigued by the additional characters. However if your knowledge of Shakespeare is restricted to Leo DiCaprio in Romeo & Juliet or Sassy Gay Friend, then this may not be the play for you.

One thought on “We Love Arts: Henry VIII”