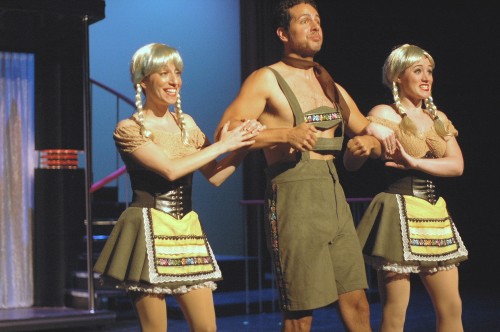 After signing up for that high school production I went on to produce over 12 shows in high school and college- then I stopped. I moved to the DC area and I walked away from theatre.

Until a community theatre in Arlington pulled me back onto the stage two years ago. Thanks to that theatre I started to stage manage and now theatre is back in my life.

Unlike other shows I’ve reviewed, the players in this group perform not for money or recognition but for the love of the performing arts. Like other community theatres they rehearse long hours after their day jobs, scavenge for costumes and set pieces, and work just as hard as any equity actor at the Kennedy Center.

This month the place where I got my theatre reboot opened their 60th season with “Cabaret,” the 1960’s Broadway classic that won three Tony awards including Best Musical. The musical has been revived twice (with the 1998 revival winning a Best Revival Tony) and has also been adapted in a well known film staring Liza Minnelli. The show takes place in 1930’s Germany and paints the coming of the Third Reich through two stories: one of an American writer who falls in love with a Cabaret dancer, and another romance between the writer’s landlord and a Jewish shopkeeper.

The production is polished and flawless on the technical side. Dave Means and Amanda Acker created a suburb set that works well with the expansive space in the Thomas Jefferson Theatre. I was most impressed with the red Cabaret sign that looked too good to be hand built. The pacing of the show was quick and snappy with silky smooth scene transitions, something I always appreciate as a stage manager.

Andy Izquierdo had a challenging role as the Emcee. He not only has to hold the show together, but perform the most recognizable number in the whole show in “Willkommen.” I can’t count how many times I’ve seen it done in showcases and karaoke nights. Izquierdo accomplishes it all, with a charm that the audience expects from any Master of Cermonies.

Between the dueling storylines of writer/cabaret girl & land lord/shopkeeper, I felt more satisfied with the latter of the two. Jennifer Strand and Bill Karukas are fabulous as Fraulein Schneider and Herr Schultz. The moment they share in “It Couldn’t Please Me More (Pineapple Song)” is too cute for words. At the same time I felt more invested in their relationship as it takes a dramatic turn in the second act.

When it came to Clifford Bradshaw (Scott Harrison) and Sally Bowles (Lauren Palmer Kiesling) there just wasn’t any chemistry. Bradshaw was well performed, he just came off a bit too milquetoast for my tastes. There wasn’t any problem with Bowles as the attention-seeking Cabaret girl.

Cabaret is just more than can’t miss numbers (however I recommend the “Two Ladies” and “Kick Line” numbers), it is more than two romances that go through a maze of political and social tensions. It is a commentary on a dying age which gave way to a movement that would later change the world.

If you don’t have plans, I recommend catching tonight’s closing performance- you won’t pay DC prices but you’ll get a well done show that rivals the big boys across the river can muster.

One thought on “We Love Arts: Cabaret”