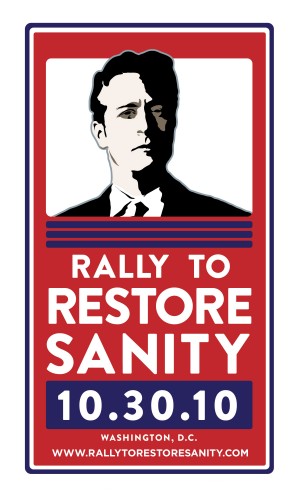 Wednesday night I was having dinner at the Gordon Biersch in the Cleveland Airport when the gentleman at the table next to me decided to strike up a conversation.

His name was Rocky Ray, and he worked for Michigan State University. He was on his way back to his home in Lansing but mentioned he was bringing his family to DC on Friday to attend the Rally To Restore Sanity. When he spoke about bringing his kids to The Rally he had an enthusiasm that a Dad would have keeping his kids up for a No-Hitter in baseball. He talked about his past family trips to DC for the past two Inaugurations and his excitement for The Rally made me realize how high this event has risen.

Will this weekend’s Rally go down in history like Obama’s Inauguration or Martin Luther King’s famed speech on the steps of the Lincoln Memorial?

Tomorrow’s rally has much in common with January 20th, 2009 if you think about it. Both events have tackled challenges with porta potties, both have drawn many around the country to descend to DC (sparking crazy offers of housing on Craigslist), but most importantly both have empowered America’s Youth to mobilize. If they won’t be on The Mall this weekend then they will be at one of over a thousand satellite meet-up and parties or watching it live on Comedy Central.

But is this mobilization one of a political nature? It certainly appears that way with how the media is treating it. NPR and WaPo staffers are forbidden from participating in the event for fear it will ruin their un-biased bias. Voices out there are saying it’s a last-minute ploy at young voters and that we can expect the anti-tea party message to spout from Stewart and Colbert’s mouths. Some are even declaring this Rally to be Gen-Y’s Woodstock.

This weekend’s Rally will go down as the third big DC event I was truly excited to plan for, prepare, and attend. The previously discussed Inauguration is also on that list.

The other event on that list? Conan O’Brien’s show in DC.

For those that aren’t excited about the political message that could come out of The Rally needs to lighten up. This Rally will be as political as The Daily Show is news.

So on the eve of The Rally I call for everybody to stop analyzing and start enjoying what will be a good show. DC won’t be crazy this weekend from uber-liberal ideas but because The Rally combined with a multitude of events will make this holiday weekend much busier than usual.

And perhaps if we just take The Rally as what it is, entertainment, then perhaps it will restore our sanity.

4 thoughts on “The Rally To Restore Sanity: Why We All Need To Stop Analyzing It And Just Enjoy It”