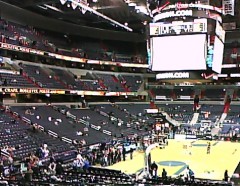 A view of the Verizon Center prior to the game. (photo by Patrick Pho)

The Wizards fans arrived to the Verizon Center for their home opener eager for a win. After starting the season with losses to Orlando and Atlanta, the crowd was ready for 2010’s first overall pick John Wall to go toe-to-toe with the second overall pick Evan Turner.

While The Wizards finally earned their first W in the home opener, they did so in a nail biting overtime thriller that tested the team’s depth and will to succeed. The evening’s storyline of Wall vs. Turner was soon replaced with Nick Young’s 23 points off the bench, Wall’s double-double that was one steal short of a triple-double, and Cartier Martin’s game tying buzzer-beater to send the game in overtime and allow the Wizards to close out a strong performance that suffered a fourth quarter meltdown.

The strong bench play of the Wizards was highlighted early in the game when center JaVale McGee was benched early for  quickly amassing a pair of fouls. Wall facilitated the offense which featured Andray Blatche early on (23 pts/8 reb for the night), but Sixers’ Jrue Holiday led the way early contributing 10 points to an early 22-9 lead for Philadelphia.

That’s when Nick Young got hot in the 2nd quarter, he was responsible for five straight scores for the Wizards and ended the 1st half with 15 points. Also contributing off the bench was Jianlian Yi who had six points of his own in the 1st half and ended the night with nine. In the second half John Wall took charge, ending the night with 29 points after scoring only eight in the first half of the game. He quickly earned himself double-double honors with 13 assists, but was one short of the triple-double with a a franchise-record tying nine steals.

Washington was up 73-66 entering the final quarter but allowed the 76ers to stay in the game through some bench play of their own. PG Lou Williams (30 pts for the night) powered the Sixers back to a 106-103 lead late in the quarter and it looked as if the Wizards let another game out of their grasp. That’s where Cartier Martin came to the rescue with a game-tying 3-pointer with only 3 seconds left on the clock. After the game Martin described that shot as one of the most important shots he’s ever made: an inbound pass from Wall to Martin at the top of the three point circle. Martin previously played in Europe and in the NBA D-League before arriving to the Wizards, and now has his taste of making the big shot. Two Blatche free throws ended up being the game clincher in overtime.