Foucheux got his start in DC theater when he came here in 1982 to host a TV show called “Good Morning Washington” on Channel 7 – it lasted a year. Having studied theater in college in his home state of Louisiana, he thought he’d try his hand at freelancing and made a decent living acting in industrial films. But when the “theater explosion” burst upon DC in the mid-1980′s, he took a chance and got back on the boards. Suddenly it seemed the area was filled with “strong small companies, and as they grew, I grew too.”

He knows he is lucky too. “In my early career I was pushed forward by directors, like the late John MacDonald of Washington Stage Guild. People like Joe Banno and Ari Roth took chances on me. ” But he notes that though brilliant artistic directors are vital to the area’s success, the single most important reason DC theater has flourished is its audience base.

“DC audiences get it, in the sense that they understand the need for diversion,” he says,” They want to be intellectually stimulated, yes, but there’s an absence of the harshest criticism like you find in New York.” He notes that he can be surprised by the “vitriol” in other theater environments, and finds DC to be more nurturing.

Currently Foucheux can be seen making DC audiences roar with laughter in Theater J’s The Odd Couple as Oscar Madison. Director Jerry Whiddon is at the helm, and Foucheux is enjoying the run immensely. Whiddon is “so smart and sharp about comedy,” he says, “he was right at every turn.” Of his compatriot J. Fred Shiffman as Felix Unger, he says, “Fred and I have worked together before, our styles are similar and it’s a pleasure to play off of him.” In order to combat possible mimicry of those iconic performances from both the original production and the TV series, Whiddon told Foucheux and Shiffman to keep their portrayals grounded in reality -”remember, these guys don’t know that they’re funny.” It’s a winning approach, with audiences going wild for the comedy. 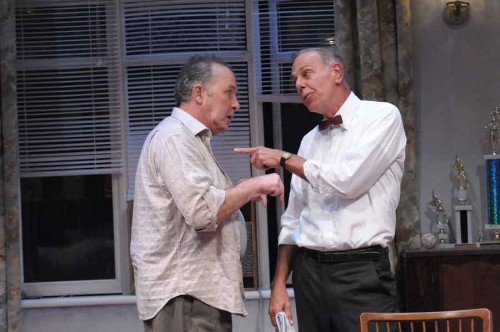 I was curious about what attracts him most to working in DC theater, and especially why did he return after his year in NYC? “I missed everyone so much,” he says, “it’s so sophisticated, so tight here, with more of a collegial atmosphere.” Though he appreciated the intense excitement and the constant visual stimulation of NYC, coming back reminded him why he loves DC.

“DC has calm, and beauty,” he says,” It’s just the right size. I’ve raised two kids here with my wife, and I have a great affinity for DC.” He loves that his current sojourn at Theater J means time spent hanging out in Dupont Circle. “I can have a sandwich at the local diner beforehand, and a cocktail at the bar afterwards,” he laughs.

Love of collaboration, collegiality, the craft of theater, and DC. That’s a great combination for one of Washington’s finest actors. We’re lucky to have him back.