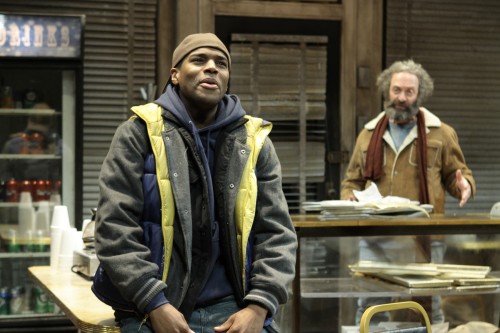 Studio Theatre’s production of Superior Donuts is the definitive tale of modern immigration. Within the Chicago neighborhood of uptown, playwright Tracy Letts finds the perfect setting for a refreshing, honest look at immigration in America. Inside the confines of a run-down, locally owned donut shop, we go on a journey that is as old as the first visitors to Ellis Island, exiles from wars of the past, and even the passengers of the Mayflower.

The owner of the eponymous “Superior Donuts,” Arthur Przybyszewski (Richard Cotovsky), is not only a burnt-old hippie, but an early generation American born from Polish parents. When he hires Franco (Johnny Ramey), an ambitious young African-American, it is more than a clash of generations; it is an intersection of two different perspectives of the immigrant story.

Franco is bright, enterprising, and charms the audience with his non-stop ideas and dreams. He embodies the great American dream that every newcomer to this country has held at one time- he even aspires to publish “The Next Great American Novel.” Arthur’s parents had similar dreams when they purchased Superior Donuts, which he now runs. Arthur no longer has the same immigrant enthusiasm or optimism however. His ornery approach and dismal outlook is deeply rooted in a lifetime of fear. Fear of war caused him to seek refuge in Canada during Vietnam. His aversion to risk put him in a practical but failed marriage that resulted in an estranged daughter.

Immigration in America is an ongoing story of this kind of fear. From the Europeans of the early 20th century to the Hispanics and Mexicans of today, each of them decided to come to America, not only with dreams of prosperity, but to escape fear. For the early Puritans, it was fear of religious persecution; for my Vietnamese parents, it was fear of political persecution; today it is fear of an impoverished life that inspires many to come to the United States.

Arthur’s neighbor, Max (Gregor Paslawsky), is without that fear. The owner of the electronics store next door has successfully assimilated himself into American culture. The dreams of capitalism and success still burn in him as he urges Arthur to sell the shop so he can expand his store to become the biggest in the neighborhood. For the audience it is bittersweet dream for Max embodies perhaps one of the most American of traits: selfishness. He is eager to see the closing of a beloved local eatery for his own benefit. Max is more than an ex-patriot of Russia; he is a fervent new patriot of the United States. He spouts nothing but love for his new country and demands that his immigrant nephews speak in the native tongue of their current home- not the home they left. For many immigrants in this country, they are not only adopting a new home but adopting a new allegiance. I’ve seen this in many cabbies that have driven me around the city and Letts hits it on the head with Max.

The road for many immigrants in this country is not an easy one upon their arrival here; they have to face hardships as newcomers while trying to fit in the system and status quo, which is sometimes not as welcoming as we like to think. When Franco finds himself in trouble with gambling debts he is visited by local bookie/gangster Luther (Chris Genebach). Luther needs to collect the money owed to him but does so with a smile and instilling a false sense of security. His welcoming yet threatening approach is a statement to the system we live in today. As much as America welcomes all within our borders, today’s immigration issues over border security and job outsourcing has created an image that is welcoming, yet with many exceptions.

What makes this show so great is more than the hilarious bits, more than well acted performances from Arthur and Franco, more than a supporting cast that truly compliments the show. Director Serge Seiden brings out the word of playwright Tracey Letts to explore immigration, friendship, and American entrepreneurship all in the world of coffee and donuts. The show embodies and explores so many themes, ideas, and tensions within America’s immigration story, but the end makes one thing clear: the true answer to our current problems does not lie in borders or assimilation but in acceptance and the realization that no matter what background, skin color, or occupation we all have to work together if we want to build a great society and create amazing things.

One thought on “We Love Arts: Superior Donuts”