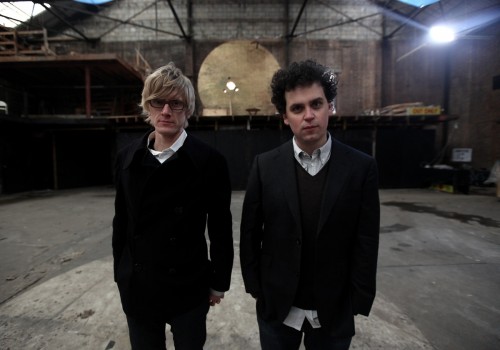 I love U Street Music Hall.

The two combined for one of the most fun nights of electronic dance music that I have had in Washington DC since the heydey of 90’s techno at Trax or Capital Ballroom/Nation. It was so much fun, I can hardly believe that it took place in our city. No offense DC, but on the pure electronic party front you’ve been lacking for years.* Simian Mobile Disco’s ‘Delicatessen’ party at U Street Music Hall rivaled some of the best European dance parties and Sahara Tent raves I have experienced. I imagine that bringing real ‘experience’ dance parties like this one to DC is exactly why Jesse Tittsworth and Will Eastman built their electronic music mecca in the first place.

Okay, so why has it taken me so long to get down to U Street Music Hall? I guess I wanted the club to find its sea legs first, to work the kinks out. Also, if the rumors about this place were true, I was set on making my first time their something really special. As soon as I heard Simian Mobile Disco’s “Delicacies” album and saw that they were spinning at U-Hall, I knew that this gig was the one.

Simian Mobile Disco’s “Delicacies” represents the true face of the duo. Stripped bare techno beats devoid of any pop music conventions. Their remixes for big artists like Muse and Air get pretty edgy in their own right, but this “Delicacies” project is something else entirely. SMD’s approach to electronic minimalism dances the fine line between total abstraction and danceable. It is throw-back bare bones electronica with a spirit of experimentation that makes it sound like one of the freshest sounds around.

The duo took ten-minute turns for two and a half hours in the booth on Wednesday night. They played nary a recognizable tune and instead unleashed a truly awe-inspiring and inner-ear rattling salvo of treble squalls, big bass that hit you like a bag of oranges ala The Grifters**, and bizarre ratchety percussion sounds. The two British DJs looked like they were having a great time simultaneously torturing and tickling the enthusiastic and spastic crowd. They masterfully worked the breakdowns and frequently and creatively used tension build-ups into sound explosions.

Their set was sans vocals except for a few sampled tracks late in the night. This non-stop parade of mostly instrumental dance music whipped the dance floor into a total frenzy at points. The set bounced around between minimal experimentation and curtains of white-noise. Simian Mobile Disco used treble and static sounds unlike any DJs I have really heard before. The treble rush was just as exhilarating as their bass was body moving. At times the treble wash got so loud and intense people had to cover their ears. Old school techno was not known to be the most pleasant listening experience and SMD’s take on modern minimalist dance music revisted to those challenging music days. I really admired the fact that they were committed to filling the dance floor in very audience challenging ways.

The sound in U-Hall lived up to its mega-hype and then some. My ears are still ringing and I am still grinning. SMD’s treble-bass extremes sounded amazing all night. Most of the set I was dancing dead center on the dance-floor and the sound was a physical thing around me. It felt like the sound was alive and we were swimming through it. The crowd at U-Hall was a revelation as well. The place was packed to the gils (on a Wednesday with a midnight start time!) and the diverse crowd proved to be a delight and just as much a part of what made the evening great as the music was. It was one of the most unpretentious, happy, and welcoming crowds I have seen in DC in just about forever. It was a true dance culture crowd, the likes of which made it so much fun to rave out at Coachella or back in the day at Buzz. Perhaps U-Hall’s no camera, let it all hang-out, and have fun policy is onto something.

This show was a true delight and totally opened my eyes to how fortunate DC is to have U Street Music Hall. It is exactly what DC has needed for years. A true home to quality and cutting edge dance music. I hope its reputation continues to grow beyond our borders and we get more quality acts like Simian Mobile Disco in there soon. Oh wait, Richie Hawtin is there on Monday night…hell yeah!***

* Too much posing and judging, not enough killer tracks and dancing. Seriously, thank the techno gods for U-Hall delivering us from the heathens!

** From Jim Thompson’s ‘The Grifters’ – “She knew the oranges. She knew all such gimmicks, though never before had she been the victim of any. The oranges was an item from the dummy-chuckers’ workbag, a frammis of the professional accident fakers. Beaten with the fruit, a person sustained bruises far out of proportion to his actual injuries. He looked badly hurt when he was hardly hurt at all. But he could be hurt. If he was hit hard enough and in certain areas of his body. Without feeling much pain at the time, he could have his internal organs smashed. Used in just the right way (or the wrong way), the oranges produced much the same effect as an enema or douche of plaster-of-paris.”

*** I also need to get in there to check out some of our local talent on a weekend. I think Will Eastman’s got a birthday bash coming up…