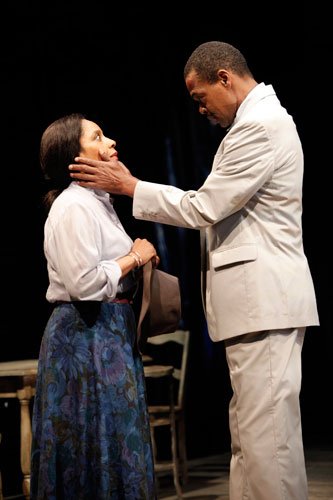 As I walked up the long, winding ramp that leads into the new Kogod Cradle at Arena Stage I couldn’t help but wonder if the journey to our seats was part of the overall experience of seeing a show there.

The 200 seat / 3,400 sq. ft. space was designed for “building the canon of American work and cultivating the next generation of writers.” The woven walls, oval shape, and intimate dimensions of the space make it worthy of being called a “cradle.” When you are inside it, you don’t feel like you are inside a stage but inside an egg or womb, watching a piece of art grow before your eyes.

If Arena Stage was  aiming for the feeling of incubation and development for their “new play” stage, they hit it on the dot. They also hit the target with the show they commissioned to be Kogod Cradle’s first play: “Every Tongue Confess” by awarding winning playwright and poet Marcus Gardley. The show embodies the works that we should expect to find at the Cradle: new, bold, and ambitious plays that explore new avenues of story telling.

At face value Every Tongue Confess feels like a Southern Baptist/Revivalist sermon (or what I think when I use the words Southern Baptist/Revivalist sermon): rousing orations, allegorical structure, and passionate musical performances. When the audience dives into the crux of the show however, the play also reads like a condensed epic poem: an ensemble that plays a Greek chorus role, a man’s (Jonathan Peck) journey to find his son, and supernatural elements you wouldn’t expect from a story set in mid-90’s Alabama.

The story intertwines the lives of a husband (Jim Ireland) who takes custody of his estranged daughter (Autumn Hurlbert), a female Reverend (Phylicia Rashad) who has mystical healing powers, and the perviously mentioned man of mystery who shows up at her doorstep. The show goes in and out of each storyline seamlessly and Gardley manages to tie all three threads together in a neat little package before we get too lost.

The strong ensemble cast includes a three-person chorus of actors (Crystal Fox, Eugene Lee, and E. Roger Mitchell) and acts as the glue of the story; at a drop of a hat the chorus transforms from spectators to supporting characters in the scene.

Among the ensemble, however, there is one star that needs to be highlighted, and that is Phylicia Rashad. Best known from her past on The Cosby Show, the audience becomes focused on every word she delivers as the sharped tongued character Mother Sister. Much like TV mom Claire Huxtable, Rashad’s interactions with her son Shadrack (Jason Dirden) and mysterious stranger Blacksmith are barbed with witty one-liners that elicit chuckles. However, there are moments that showcase her talents as a stage actress- like when she is belting out a song or delivering a sermon for her congregation.

Also on showcase in the play is the Kogod Cradle itself. Characters make graceful entrances and exits in between the cradle’s woven architecture, creative lighting paints a chilling image of a lynching, and the Cradle’s trap door makes a strong cameo at the end of the show. As much as you are watching a new play, you also realize that you are also getting a real-life demo of what the cradle is capable of for future productions.

Every new play, however, is not without its share of flaws,:the show feels a bit longer than it really is and would benefit some tightening in certain places. However, these shortcomings are small in nature and the show is a bold new work worthy of  one’s first trip to the newly-renovated Arena Stage. I hope as the show continues its run in the Cradle it will grow like the egg that it is- hatching into a wonderful and polished production that is the perfect start for the new Kogod Cradle.

One thought on “We Love Arts: Every Tongue Confess”