‘Hot Dogs’
courtesy of ‘vpickering’
Before I go in to the specifics of my trip to DC-3, I need to confess something about myself: I come from a family of carnival people. We’re not all carnival people, but there definitely is a branch of the family tree that knows a lot about freak shows, overpriced games and convincing everyone if they just try one more time they’ll be able to throw the ring around the bottle. Carnivale it is not (we don’t have supernatural powers, at least that I know of) but it is still a dark past that I’m usually not offering up to strangers. But it plays a crucial role in my ability to dissect DC-3, since I obviously know plenty about hot dogs and cotton candy.

DC-3 is the newest restaurant from the team behind the uber-popular Matchbox and Ted’s Bulletin. Located right down the street from Ted’s along 8th St. SE, DC-3 looks more like a shrine to the plane it’s named for than a restaurant. A giant propeller greets you as you walk in, and I implore you not to stand up too quickly if you’re sitting at the table underneath it, lest you meet the Raiders of the Lost Ark-style fate of those bumbling Nazis. 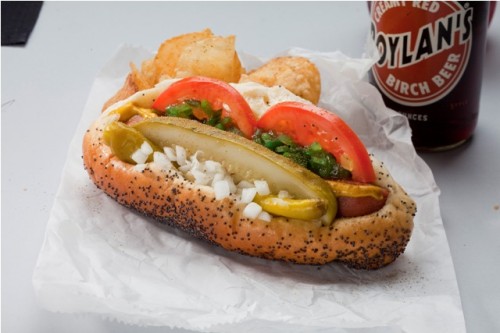 And now we get to the ‘dogs. First of all, if you are in search of a quick hot dog with a little ketchup that you can shove down your throat while waiting for the bus, DC-3 may not be for you. Not only are they pricier than the two for $2.22 special at the 7-11 down the street, they are seriously filling and worthy of at least sitting while eating. In my opinion though, that’s okay. Though there is the classic “NYC Street Vendor Dog” on the menu, even it is a spruced up version of what you probably imagine.

But you’re not coming here for a street meat dog, right? I sure wasn’t. The menu is a little daunting since with seventeen specialty dogs, it’s pretty tough to choose which direction you want to go in. The first on the menu, and most popular, is the Chicago 7. It’s a classic Chicago hot dog complete with tomato, pickle spear, “Nuclear” green relish, onions, sport peppers, yellow mustard and celery salt. It’s a lot in one bite, but the relish and the peppers really are a wake-up call for your taste buds. My personal favorite was (surprisingly) the Q’s Seoul Bulgogi & Kimchi. By no means the prettiest thing I’ve ever eaten, it’s a beef dog with marinated rib-eye Bulgogi and pickled kimchi. This, friends, is not your mother’s 4th of July hot dog. The kimchi is really spicy and the beef is super flavorful. It would have been just as good over rice instead of a hot dog, but in this case it somehow works. 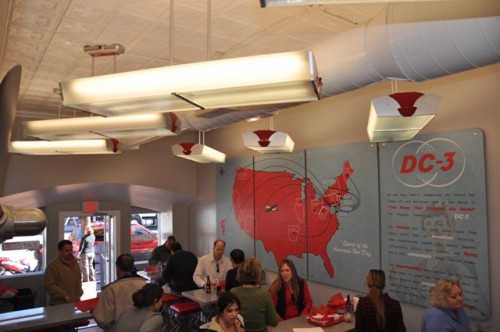 Not everything was as successful as the first two, and unfortunately it was the local favorites that suffered. DC-3 does do their version of a half-smoke, and while it is quite good and would probably impress just about every tourist who has always wanted to try one, Ben’s Chili Bowl doesn’t exactly need to worry. I also wasn’t a big fan of the Bay Bridge Pretzel Dog. It has all the components to make it a great dish, but while the Q’s Seoul dog made odd toppings work on a hot dog, the Bay Bridge falls short. It’s a large hot dog on a thick pretzel roll, and by the time you put their (albeit tasty) crab dip on top, it’s a little too rich to eat. I do give them props for rocking Old Bay on a hot dog though; I’m taking that idea home with me.

Something should be said for the attention to detail the owners put in to designing the menu. Not only did they head to New York to do extensive research, but the ingredients of each specialty hot dog is thought out in such a way that everything makes sense. The Cincinnati Coney has real Cincinnati chili on it, the Philly Cheesesteak dog has Cheese Whiz on it, and the Razorback dog is Arkansas’ own Petit Jean Cheese & Bacon Dog. The detail I was most impressed by though, was the attention paid to the bread. No plain old steamed buns here (except in the meticulously planned out NYC Street Vendor Dog), instead the owners have designed the bun of each speciality dog to compliment the ingredients. The heavy pretzel bun stands up to the richness of the Bay Bridge Dog, while the Lyon Frankfurt Loaf (my personal favorite) is like eating a hotdog out of buttered challah. 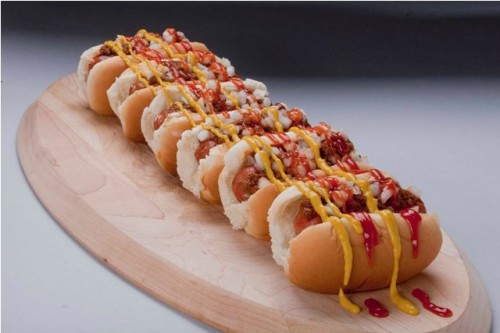 I think if you’re going to DC-3, you’ll probably want to try out one of their predesigned dogs, but if you feel like taking things into your own hands you have that option. Taking a page from the uber popular 3.6.9 miniburgers at Matchbox, DC-3 offers the 2.4.6 “mini-dogs.” Popular with the kiddies, these straight up dogs are there when you want just a little, or quite a lot. And they’re so cute! On the other side of that coin is the Foot Long Dog, which is available as one big choose your own toppings dog, or as a half and half dog, if you can’t be bothered to commit to one topping combination.

Are these the most perfect hot dogs known to man? Well, not necessarily. But for between $4-$7 you can get some mighty creative options. And if this gives me an excuse to eat a bacon-wrapped hot dog in the name of creativity, I’m all over it. Oh, and they have cotton candy. ‘Nuff said.