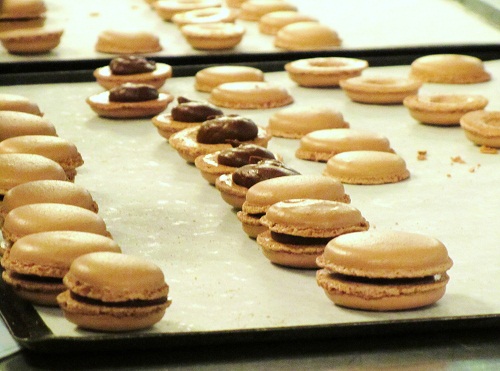 Baking is a messy affair in my house. Counters are flour-coated, floors become sticky with sugar, and the dishes, well, there are a lot. And they spread out too, somehow avoiding the sink to take up residence on any available flat surface. By the time I’m through, my apartment is generally a bona fide code red disaster.

Not so at The St. Regis. Last Sunday, I had the pleasure of taking a macaron-making class at Adour, the very beautiful, very glamorous restaurant in the landmark hotel on 16th Street. (Side note: If you’ve never been inside the lobby of The St. Regis, it’s worth visiting. It will make you feel like a more elegant version of yourself, guaranteed.) From start to finish, every moment of the experience was high class and polish. When I first arrived, they took my coat. They held my chair out for me. They gave me (good) coffee, and the bartender charmed me into giving him macarons after class (I was happy to oblige).  In contrast to my own apartment, The St. Regis seemed like some dreamy fairytale land of baking.

But enough starry-eyed musings; let’s get to the macarons. Not to be confused with their orthographic cousin, the macaroon, macarons consist of two light, crackly cookies that sandwich flavored filling. Although they’ve been been around France for at least a few centuries, the macaron has only exploded onto the U.S. culinary scene within the past few years. Now they’re everywhere, including Adour, where they’ve become the restaurant’s colorful confectionary signature.

Adour’s classes are led by Fabrice Bendano, the restaurant’s soft-spoken, completely delightful pastry chef. In his opinion, the recent lust for the dainty cakes stems from the macaron’s colorful hues, bite-sized portions and unlimited flavors. Equally important however is Washington’s increasingly adventurous palate. “DC 11 years ago was totally different than it is now,” said the native Parisian, who estimates he makes 300 macarons a day. Where once Washingtonians were close-minded about desserts, “now they are more open and like to try new things.” 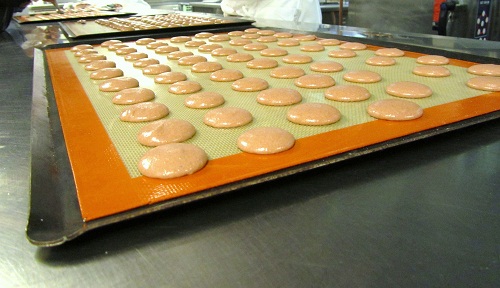 After initial meet and greets, Bendano took our small group back to the kitchen. With only four other people there that day, the class felt more like a private lesson than anything else. The class is largely demo-based, which appeals to some more than others. Normally I’m a get your hands dirty type of gal, but watching Bendano work is truly a treat. He keeps his apron as spotless as his kitchen, and his deft, precise motions are mesmerizing. As a small sampling of his resume, Bendano has worked at 1789, Monaco’s three Michelin-starred Le Louis XV, and the three-starred Taillevent in Paris. The man clearly knows what he’s doing.

This was made particularly apparent during the final stages of making the macaron batter, when he whipped the ingredients into such a frenzy that I suspected his arms might be mechanized (see “beat as if your life depended on it” note in the recipe below). Even if I had the proper tools and anything that remotely resembled a bicep, I am quite certain I could never recreate the technique he displayed. Later, Bendano demonstrated the art of piping with perfectly aligned rows of identically shaped macarons. Guess whose attempt did not turn out quite as nicely? 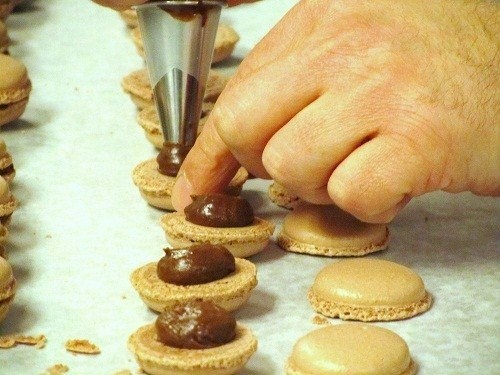 No matter. The macarons — even my deformed little creatures — were the best I’ve ever had. Like all good macarons, these displayed the trademark tenants of perfection: a crunchy crust, chewy interior, glossy top and textured “feet” along the edges. And since dessert isn’t dessert without a digestif, Bendano recommends pairing macarons with champagne or chardonnay, although sparkling cider will also work for you teetotalers out there.

As a holiday gift to our readers, Adour has very graciously allowed We Love DC to publish their chocolate macaron recipe online. If you don’t dare attempt them on your own, classes are offered on average once a month. Macarons are also available in the restaurant, or can be purchased in boxes of 12 for $20. For more information about classes or purchasing, please visit the site or call the restaurant at 202-509-8000. 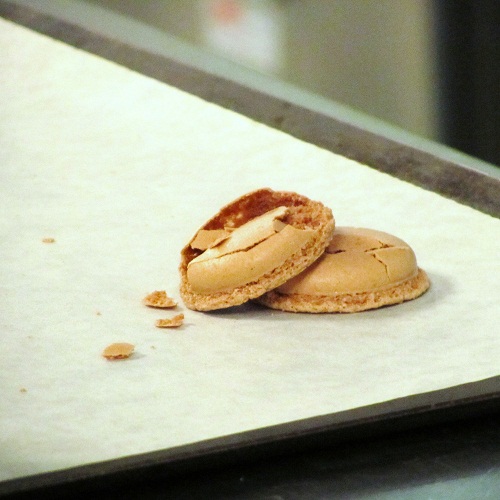 Mix almond flour and cocoa powder together. After combined, blend in a food processor for 10 to 15 seconds. After blended, spread mixture on parchment paper and let dry overnight.

The next day, make the meringue. Whip 7 oz. egg whites until they reach stiff peaks. In the meantime, add sugar to water and let dissolve by bringing water to a slow boil. When the sugar water reaches 250° F, pour the mixture into the egg whites while continuing to whip eggs on high speed. Continue whipping until cooled. (Otherwise, the heat from the sugar will cook the eggs.) Add food coloring, and continue whipping for another two to three minutes. The meringue should be smooth, thick and glossy.

Next, mix the almond flour mixture with the 6 oz. egg whites until incorporated. Add a small portion of the meringue and mix in. Add the remaining meringue and beat with a spatula as if your life depended on it. Once fully mixed, pipe mixture onto baking sheets in desired size and shape. Let dry for 20 to 30 minutes. Bake at 300° F for 12 minutes.

For the filling: Boil cream in a saucepan. Remove from heat and add chocolate and salt. Mix slowly so as not to incorporate air. Once mixture cools to room temperature, add butter and mix, preferably using an immersion blender.

Once everything is ready, find each macaron a similarly sized mate. Pipe filling on the flat side of one macaron, placing its mate on top like a sandwich. Et voilà! Your macarons are ready.

6 thoughts on “Baking With the St. Regis”