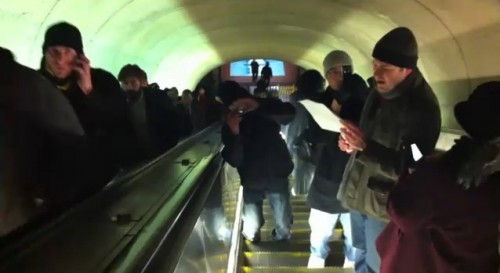 Here’s the end to our #MetroCarol story, but before we get to that- a snapshot of what happened.

I was delighted to get a Facebook Invite to an interesting event: a flash mob on the DC Metro. Jason McCool, an actor and music professor, and Melanie Spring, founder of web marketing firm Sisarina, wanted to organize a spontaneous outburst of Holiday Carols on the platforms of various Metro Stations on the Red Line.

It was a great idea; a good natured event that would be a lot of fun to watch and would bring a surprise dose of holiday cheer into the city. Plus, I’ve never been involved with a flash mob before. I’m sure it was part of the reason over 100 people RSVP’d for the event.

The viral nature of flash mob videos on YouTube also attracted the attention of the news media. It wasn’t a surprise the press caught wind of the event. In today’s age of social media it’s hard to hide a secret event when conversation was openly held on Facebook and Twitter by both the organizers and participants. The press sniffed out the chance to get on top of a story before it happens, unlike most flash mobs which go viral after a video is released post-event. A similar flash mob in November featured the Philadelphia Opera Company singing inside a Macy’s department store didn’t get notoriety until the video was posted by the group the day after.

The challenge McCool and Spring faced was trying to grow their event via social media while keeping it under wraps. Unfortunately they found out it was an almost impossible task.

McCool was interviewed by the Washington Examiner and WUSA before it was even scheduled to happen. In the Examiner piece, the rough outline of the event was made public, creating not only more buzz for the event, but opening it to public scrutiny before a single note was sung.

With the event almost public knowledge amongst the media, it was a top local story on all the major outlets and morning radio shows. NBC Washington wrote that it would ruin the commute, TBD posted the schedule, and all of a sudden the event was drawing more attention than it should have.

McCool and Spring expressed frustration over their now-public plans- and for good reason. What good is a flash mob when everybody is expecting it and already talking about it? This isn’t a flash mob snowball fight where everybody has fun regardless of the press prior; the whole idea of surprise was lost with the amount of attention they got.

Regardless the organizers rolled with the punches and decided to change plans, a spontaneous outburst of caroling was changed to a gathering to sing outside Metro stations. The flash mob allure may have been lost but I decided to come out and see how it would unfold.

Plus it’s the holidays! Shouldn’t we all take a moment to enjoy some pleasant holiday songs?

When I arrived to Dupont Circle I wasn’t the only person around with a camera. WJLA, WUSA, NPR, and the Washington Post were all on-hand to see how the “flash mob” would unfold.

As the singing began it started as a confused walk around the Dupont Circle fountain but gained momentum as they decided to brave the walk across the street outside the metro station entrance.

The most memorable moment came as the crowd went into, “Let It Snow” and snowflakes began to fall. I’ll admit it was a really nice touch from mother nature.

The small crowd of 20-30 decided to sing, “The 12 Days of Metro” down the escalator earning a few smiles from the passengers on the other side. After a few songs they quietly boarded a train and made their way to Union Station.

Today the media posted their post-mortems. NBC Washington remains snarky about the event while, the Washington Post and WUSA highlighted the one key take-away: people enjoyed it.

Now there’s been a lot of talk about “leaks” and objections to the whole event and McCool is already turned off over the idea of a repeat flash mob because of all the pre-event criticism. I don’t think you can say there’s a leak when you organize an event and openly talk about rehearsing, planning, and recruiting big crowds in the wide-open space of social media. I guess the lesson learned is if you want to keep it a secret keep it off Twitter.

However I have respect for McCool and Spring for going forward last night with a noble goal: making people happy. 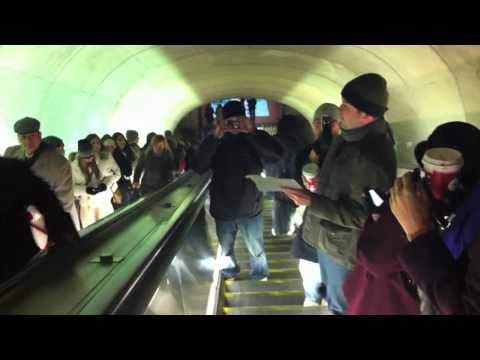