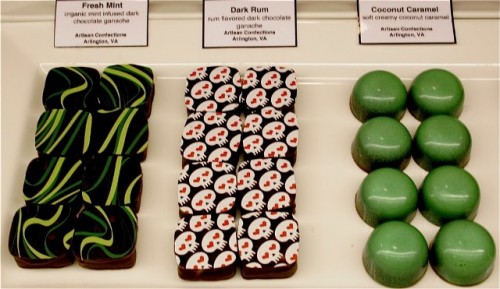 There are days when all you want to do is eat lots and lots of chocolate. You don’t care who sees you, and it’s not completely outside the realm of possibilities that you will visit not one, not two, but multiple stores in search of something to quench you thirst for something sweet. As a girl who has been down that road a time or two, it can be a bit embarrassing to run out of the house in your sweats and unwashed hair to blindly search for chocolate. But what if there was a way to justify this lapse in presentability by doing it in the name of learning? If you can make peace with that jacked up reasoning, then D.C. Metro Chocolate Tours is for you.

The tour is in its infancy here, but began in Boston over twenty years ago when a man who loved chocolate figured that lots of other people did too. Not until his daughter moved down here to attend George Washington University did he set his sights on our nation’s capital. They’ve only been operational for about six weeks, but judging from the tour I went on, already has quite a following.

I was lucky enough to be invited on the Dupont Circle tour, and while the confirmation email told me that our group could be “as small as two or as large as 14,” we topped out at a healthy twelve. It was the clientele I expected: gal pal duos, a mother and daughter, and a few couples with excited girlfriends and patient boyfriends. Not only were these poor guys forced to wander Dupont in search of tiny pieces of chocolate, but they also had to carry around a dainty paper bag for their goodies while they did it. There’s a special place in heaven and Monday Night Football for these guys. Our tour started at Bread & Chocolate with a little speech by our leader Diedre. She explained the tour to us, and then went through how chocolate comes from the jungle to our tummies. I thought the talk was really informative, until I found out that my favorite kind of chocolate (white chocolate) is just a byproduct of chocolate and is made from the same substance as cocoa butter body lotion. Ew. Informative, yet disappointing. After a sampling of some Bread & Chocolate brownies, we were on our way.

Our next stop was Illy Coffee for some hot chocolate. Unfortunately we had to drink it outside, for reasons I’m not exactly sure of, but at least there was no pressure to buy anything. That is a definite classy characteristic of this tour that I honestly didn’t expect. While there is time to buy anything you would like in the stores, there is really no pressure to do so. After Illy we headed up New Hampshire Ave. to Hello Cupcake. I get a little lost in all the cupcake places these days and Hello Cupcake is…one of them. The chef and owner did come out though and let us try our hand at piping our own icing. Some did better than others, I did awesome. 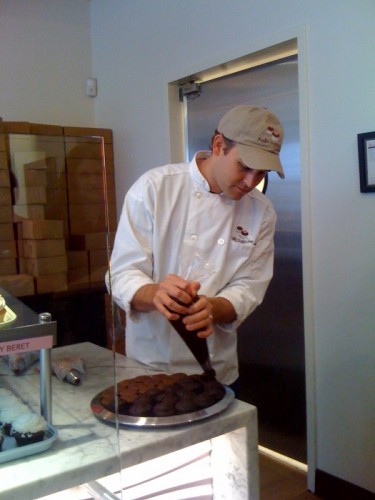 Next up was Godiva. Just like in the mall! Next. The best stop, in my personal opinion, was Chocolate Chocolate. It’s a little store owned by two sisters who just seem to really love chocolate and really love D.C. It was great to hear all their stories about the ups and downs of owning a small business in a big city, and they gave us lots of samples. And they had gummi Coke bottles, remember those? The last stop was a sit down dessert dinner at The Melting Pot. I have my own issues with The Melting Pot, since the last time I went there was before my Homecoming dance junior year of high school and so it will always remind me of the embarrassment of wearing high heels (poorly) for the first time. But just like Godiva, I thought it was a little too mall scene for a walking tour of a major city.

There is a second walking tour that they currently offer through the Logan Circle/U Street area, with plans for tours around Penn Quarter and Georgetown in the future. For me, the best part of the tour was visiting the smaller, privately-owned stores and it looks like the Logan Circle trek was heavy on these kinds of shops. On that tour, you visit ACKC, Cakelove, Biagio Chocolates and Locolat (no mall spots found here). 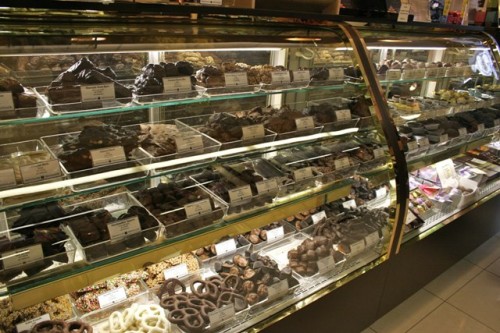 Lots of people asked if I would recommend this tour, and I would to the right person. You really need to love chocolate and walking around, since that is all you are doing. Our guide was a little light on the chocolate facts, so don’t expect to come out of with chocolatier certification, though you will pick up a few interesting tidbits. The walk is by no means strenuous, there are plenty of opportunities to sit and you will get plenty of sweets. Mothers and daughters, gal pals and friends: I say do it. Patient boyfriends: negotiate some football tickets ahead of time.

DC Metro Chocolate Tours run every Saturday of the year, rain or shine. Tickets are $48 and advance purchase is required.

6 thoughts on “Pounding the Pavement in the Name of Chocolate”