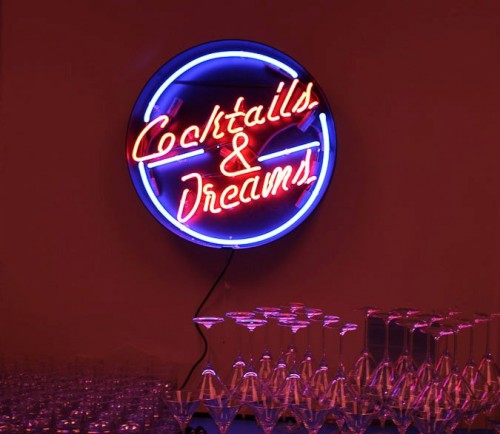 Earlier this month, the Repeal Day Ball truly came into its own with an absolutely smashing party on December 4th. Or do I mean smashed? Maybe that’s why it’s taken me this long to wrap it up for you. No, no, we’re here to encourage intelligent drinking! Thrown by the DC Craft Bartenders Guild, this party celebrating the end of Prohibition is in its third year. Here are some highlights to get you excited about our local bartending talent – and get in line now for next year. DC’s drinks scene is becoming more nationally known by the minute, and its in no small part due to the Guild and its amazing members.

Am I gushing? I don’t think so, honestly. Let’s take a look. 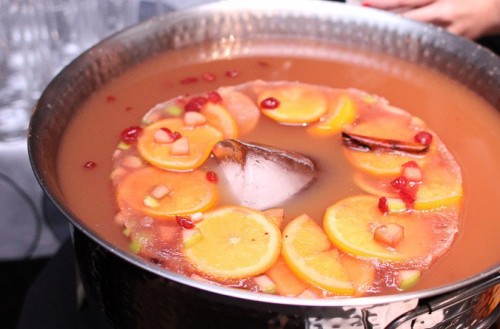 This year’s black tie ball was held at the Maison Biltmore in Adams Morgan, a Belle Epoque house perfectly in theme with the golden ages of cocktails. Partygoers dressed to the nines in vintage gowns and tails. The eye candy was a bit distracting at times (was that Tom Brown of the Passenger rocking a white tuxedo?). But this isn’t a fashion column, so let’s move on to liquor! 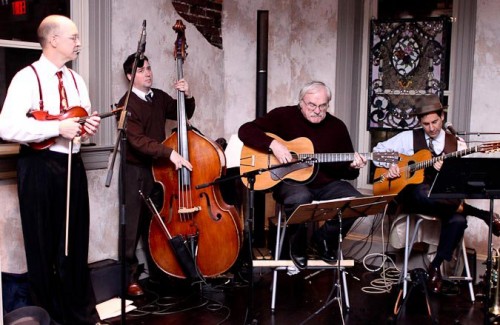 The mansion’s rooms were divided to highlight specific eras of cocktails history, a great idea that grouped bartenders together thematically. On hand were not only DC’s finest but also some special guests. Represented were…

…the punches of the 1800’s, with Dan Searing and David Wondrich
…the 1900’s golden age of highballs, with Rachel Sergi and Jackson Cannon
…bootleg bathtubs of the 1920’s Prohibition, with Chantal Tseng and Jeffrey Morgenthaler
…the 1940’s Tiki craze, with Tom Brown and Jeff “Beachbum” Berry
…the suave 1960’s Mad Men, with Adam Bernbach and Derek Brown
…the wicked 1980’s, with Dale DeGroff, John Hogan and Jason Strich
…and the Future, with Gina Chersevani and Owen Thomson

I started off in the main ballroom with a cider sipper punch by Elli Benchimol, where the Red Hot Rhythm Chiefs kept revelers entertained. The extra hour of the VIP ticket is well worth the cost, as it’s a bit more relaxed wandering the rooms trying out different drinks before it gets packed. At no point though did I feel panicky – the crowd was always happy and courteously buzzed.

After enjoying a teacup of Chantal Tseng’s Scuttlebutt & Valentino, served out of a bathtub in the Prohibition room complete with blackjack table and shoeshine station (and RepealDay.org founder Jeffrey Morgenthaler with his egg nog punch), I headed to the Tiki room, resplendently decorated with fronds and masks. Holding court was Jeff “Beachbum” Berry, considered the authority on Tiki drinks, serving up his tasty Ancient Mariner, while Tom Brown poured his absinthe-laced Fog Machine in authentic Tiki mugs. 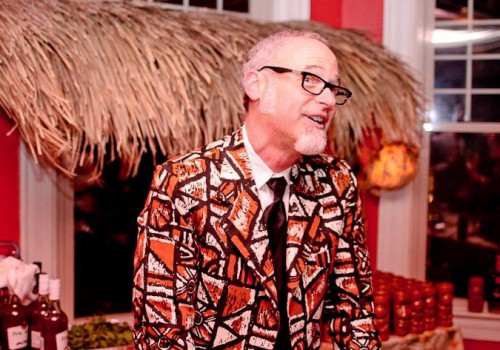 Next door was Dale DeGroff, mixing up Cosmopolitans in the 1980’s room. I absolutely jumped at the chance to sample this much-maligned cocktail reinvigorated by a true drinks legend. In his round-up of top 5 cocktail experiences of 2010, Derek Brown writing in The Atlantic highlighted this and I really can’t say it any better than him. It was a thing of beauty, more citrus than sweet, illustrating how very important balance is to a cocktail. 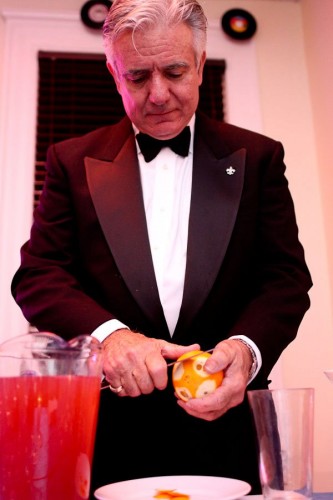 One of the highlights of the evening was the presentation of the Johnnie Walker Silver Shaker Award to Jim Hewes of the Willard Hotel’s Round Robin Bar. Given to recognize lifetime achievement in bartending, this moment choked everyone up. Not only is Jim Hewes a legend for his perfect mint juleps and love of DC history, he is also a true gentleman. It was extremely fitting that for its inaugural debut, the reward was given to him. Lauded by Derek Brown and Tony Abou-Ganim before accepting the award, he gave a touchingly humble speech and then was serenaded by Katie Nelson of the Columbia Room and Dale DeGroff singing Baby It’s Cold Outside and Adriana Salame from the Passenger singing Santa Baby. 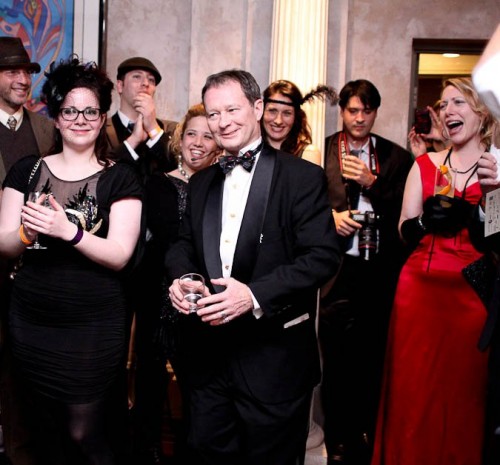 Afterwards I headed up to the Future where Owen Thomson and Gina Chersevani were doing weird and wonderful things with gastro-molecular-mixology! Shots were magically transformed into dippin’s dots and a friend slurped a lemon drop soup cocktail with gelatinous “noodles” – Owen handed out barcodes that determined your drink, because “in the future everything is decided for you.” It was a riot. 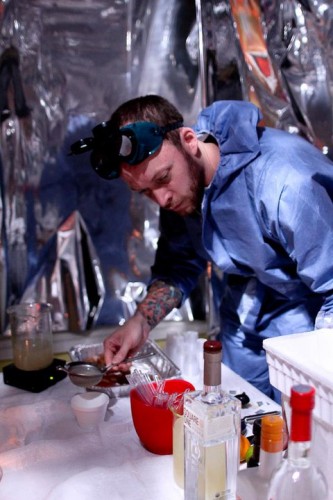 Completely different was the 1960’s Mad Men room with a very civilized Adam Bernbach mixing up a perfect Sloe Gin Fizz while JP Fetherston poured Derek Brown’s 3:1 Dry Martini. So good. Several new converts to the cult of sloe gin were made as we paused for a round. 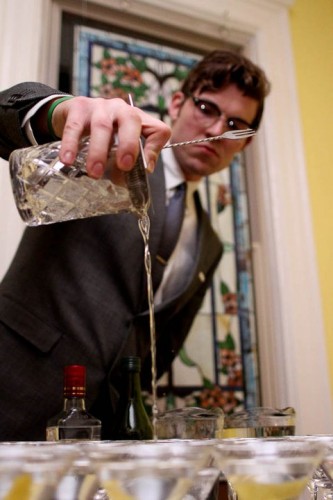 Actually I must admit, we paused here for several rounds and so the rest of the evening becomes quite hazy… 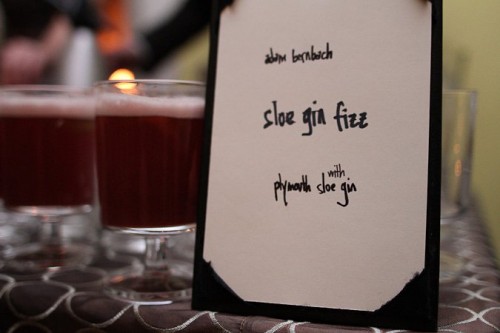 Sigh. Oh well. There’s always that moment when the party blurs into one lovely feeling of camaraderie. So help me out and feel free to share your favorite drinks and moments in the comments. And if you choose to attend Repeal Day ball next year, trust me, it’s the overall experience that will stay with you – like a half-remembered fragrance. Beautiful and elusive, it’s the perfect party combination – brilliant bartenders mixing delectable drinks while the conversation bubbles and smiles are all round. At least, that’s my memory of it a few weeks later. It was so good, I don’t need New Year’s.

(The annual Repeal Day Ball benefits the D.C. Craft Bartenders George A. Williamson Scholarship Fund and the Museum of the American Cocktail in New Orleans. Co-Chairs Angie Salame and Alisa Cohen deserve serious thanks from partygoers, as does David Fritzler of Tryst, whom I saw buzzing about tirelessly as Inventory Manager. As Angie said, “he made sure the booze came to the venue and made it to each bartender” – that’s a huge undertaking! Along with Volunteer Coordinator JP Caceres of Againn/Bourbon Steak, and Chantal Tseng of Tabard Inn chairing the Decorations Committee, which did a beautiful job with the era themes, everyone involved well deserves a round of applause.)