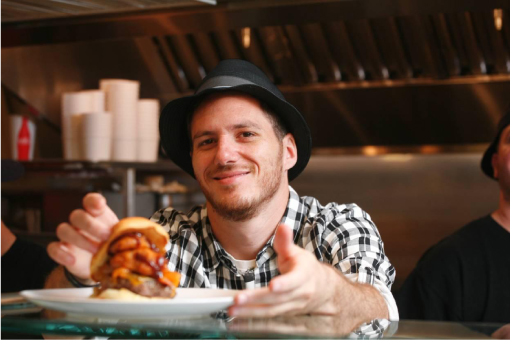 The world first met Spike Mendelsohn as a brash young contestant on “Top Chef: Season Four.” Two years later, he’s become one of Washington’s culinary darlings, making his mark on Capitol Hill with his two restaurants, Good Stuff Eatery and We, the Pizza. Now, he’s back on “Top Chef: All-Stars” (you can catch him on Wednesdays at 10 p.m. on Bravo), has plans to expand Good Stuff, and travels around the country for special events and appearances. In between jet-setting and toque-wearing, We Love DC caught up with Spike to discuss family, junk food and the latest restaurant rumble between Washington and New York.

So you’re back on “Top Chef.” What was the second round like as compared to the first?

The second round was a lot less stressful for me. The first round I had nothing to lose. I was just representing myself as a cook. This time around, I do a lot of charity work, I got two businesses, I got a book, I got a family to support and friends…it’s not only my reputation on the line when I’m going on a nationally recognized show where you know you’re going to get edited. So I just took a really laid-back approach, less competitive. I was just there to enjoy the moment and have fun and cook and see how far I could get with that attitude. A lot of people were still really competitive and a little bit bitter. I’m not one of them.

You were born in Montreal, raised in Florida, studied in France and lived in New York. Why did you choose DC? Had you spent much time here before opening Good Stuff?

I actually hadn’t spent much time here. I used to visit my sister here about twice a year. She lived here for about 10 years. My parents moved from Florida to be closer to her, and I was the guy that was always traveling. When I finished “Top Chef,” I saw a really great opportunity to kind of just do my own thing, and I wanted to be closer to my family. I’d been traveling away from my parents for a good eight years. So I decided to move to DC. And now we’re all together, running a restaurant. It’s great times.

You were largely trained in French and Vietnamese cooking. Why did you choose to go with classic American comfort food for your first restaurants?

If you had to choose a favorite child, would it be Good Stuff or We, the Pizza?

That was an easy decision! Why?

It’s the original concept that opened up so many opportunities for me. And it’s a concept that I hold pretty close to my heart. A lot of stuff is inspired by my family members from Montreal, my grandfather…things like that. There’s a lot of meaning and feeling behind this one. Not that you don’t get that next door [at We, the Pizza], but it’s a different concept over there.

There was recently an article in the New York Times that portrayed Capitol Hill as DC’s junk food heaven. I was wondering what you thought about that?

Did they say “junk food”?

Yeah, that’s what they called it. The article talked about your restaurants, Matchbox, Ted’s Bulletin…

[Clearly miffed at the term “junk food.”] We decided to do these fast, casual concepts because America has been taken over by the fast food industry. I know people love that type of food, but it can be done right and be done good and it’s not bad for you. Here, everything’s really fresh and homemade. I like to call it more fast, casual good food instead of junk food. I feel like you see a lot of that popping up because it’s easy, and our generation is easy and they want stuff really quick. It’s a new trend. Also, with the economy and everything, people are looking for comfort food and looking back to what makes them feel good. More importantly, they want value. And this is the type of food you get value out of.

‘a healthier pie’
courtesy of ‘staceyviera’

The article also said, and this is a direct quote, that “The new places around the Capitol also represent, if not an emergent dining scene, at least a steadily improving one in a city long derided for substandard eating.” What’s your take?

That makes me feel really good. I came to this neighborhood because I felt there was a lack of good food and I felt like it could use some good restaurants. I’ve been here three years, and they’re opening up one after another. My philosophy is there’s enough business and enough mouths to feed for everybody. I accept competition with open arms. I’m not one of those guys who’s like “Oh my God, a new restaurant’s opening, what’s gonna happen?” I’m happy and I’m excited for DC, and I think it’s an exciting thing for the people that live here. It’s emerging into a powerhouse with food, and the food culture here is really developing.

Do you think operating a restaurant here poses any unique challenges or perks?

The perks would be that you’re not hit up by the New York City rents or the New York City critics or the New York City trends. And that’s the same for any other city that has all that. Another perk is [DC] is a very transient place, so if you’re trying to develop a brand like I am, it’s a great place because you have so many people that are coming in and out on a daily basis, or even on a quarterly basis as far as employees. The downfall…I don’t think there’s anything. I think there’s a lot of opportunity here — big fish in a small pond type of opportunity. It’s nice. You get to develop the trends here instead of following them in New York.

Why do you love DC?

I moved here from New York about three years ago not knowing what to expect at all. The community and the city were really, really great to me. [DC has] really accepted me and it’s allowed me to do what I love best: entertain, open up restaurants, meet people, and just have a good time. So it’s kind of given me my life. I never really had a great sense of community because I was always traveling from city to city and country to country and I never stayed put. It’s a great place for me right now. I’m in a good place in life. Well, I’d have to say I’d roll into this place called Good Stuff Eatery…[laughs] You know what, I love going out to Eden Center and indulging in Vietnamese food over there and spending a couple of hours eating all sorts of great, hearty, home-cooked food. That’s my good day.

What’s in your fridge at home right now?

Nothing. I just got back from traveling for about a week, so I’ve got some fish sauce, some kimchi paste…not really anything appetizing.

What’s next on your plate?

I have to say the most exciting thing I’m doing right now is I’ve teamed up with SunTrust and MasterCard. [They] offer hundreds of offers with really great discounts and really great prices with a lot of different merchants. They donated $5,000 on my behalf…so I was able to purchase $5,000 worth of great things and presents. I’m going to go later on this afternoon and play Santa at Horton’s Kids and give out all these great gifts that most kids won’t be able to have at Christmas. It’s a really amazing feeling.

[I’m] not doing anymore different restaurants right now. I want to expand Good Stuff Eatery, so we have an expansion plan. I think we might open up in Baltimore soon.