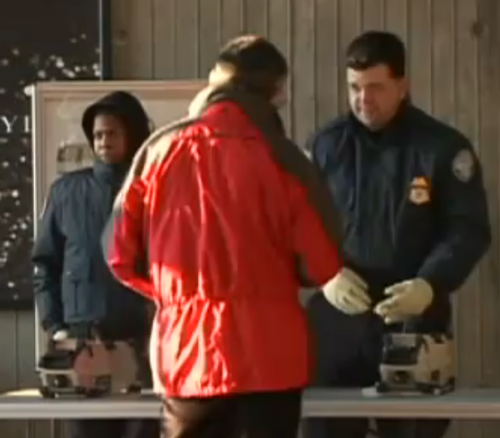 I know – you expect me to say “security theater” and gripe about their ineffectiveness. I may, at the end, but let’s stick to the somewhat interesting factual description for the moment.

Although the WMATA press release doesn’t explicitly say-so, the general description from observers and media indicates that WMATA isn’t doing full bag checks on everyone they wave over. Instead they’re doing a quick swab of the outside of the bag and only asking folks to open it if there’s a positive result. It’s unclear whether this is an effort to make the process faster, a recognition of how difficult it is to effectively visually inspect a bag, or an effort at avoiding constitutional challenges by allowing them to claim they only really invade your privacy if they have a slightly better cause.

Be that as it may, maybe you’re interested in how this works. Let me tell you about it.

If you’ve seen one of the ten thousand crime procedurals clogging up the airways then you’ve seen someone do a version of what’s going on at the metro stations. It’s possible you’ve experienced some form of it at the airport, where it looked more like what WMATA is doing. In almost all the cases what’s happening is some form of spectroscopic analysis. You might not think that astronomy and examining distant planets would have a lot in common with looking for contraband, but there you go.

If you look at the image above from NASA you see how this works on a big scale. Peaks in the visual plot let scientists see what sort of materials are in that distant object in space. From left to right you see where they’ve marked things with the chemical symbols for helium, argon, iron, and nitrogen. In this case they’re looking at light that was created when something burns all on its own, or perhaps is lit from behind by some other source in nature.

WMATA and the TSA don’t have the luxury of some sort of supernova shining through you and your bag, so they have to sample in another way. When it’s done on the television crime shows they put a sample of the object they’re checking in fluid – which the scientists would call a medium – and shake it all up before scanning it. Since you don’t want them to snip bits off your laptop bag they use a swab method instead. Besides, they’re not really interested in what your bag is made out of – they want to know if you’ve been making little animal shapes out of PETN.

So they swab your bag to see what sort of crud is on it and they put the swab into a machine to see what shows up. In this case it seems to be a Smiths Detection MMTD machine. MMTD stands for multi-mode threat detection, meaning it’s capable of looking for a number of things – drugs and chemicals used in the making of methamphetamine as well as explosives. 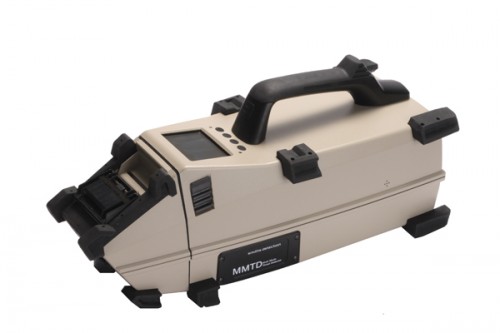 The Smiths Detection MMTD seems to match the one shown in the WMATA video. Image from the product page.

The MMTD uses a small radioactivity source – don’t panic, it’s safe unless they let you eat it – to excite the particles on that swab to see what turns up. That’s called ion mobility spectrometry.

The MMTD product literature promotes the fact that it’s possible for them to look for both explosives and drugs at the same time if they want. “Additionally, a dual mode setting allows for the simultaneous detection of explosives and narcotics from one sample.” Later on in the information they list the usage modes:

A WMATA representative assured me via phone that they’re only looking for explosives residue, which would indicate they’re not being used in the dual sensing mode. It’s reassuring, but past experience with the TSA shows us that it’s pretty common for safety screenings to begin to cross over into other non-safety measurements and arrests.

But that’s dangerously close to a civil rights rant, so we’ll let it go for now. Instead I’ll just point out one security theater issue: these devices check for chemical traces but they don’t tell them what’s inside the bag, only what’s on the outside. 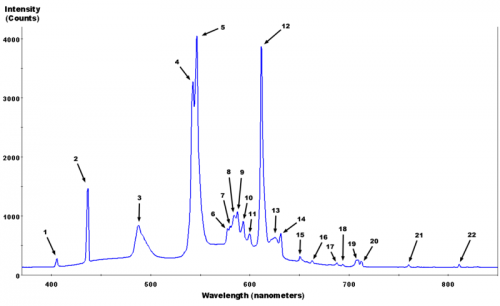 Above is an analysis of fluorescent light, which shows that there’s mercury in the bulb. Click it to read more details.

Meaning that when they swab a bag and it doesn’t set off an alarm it doesn’t mean that there’s not a brick of explosive or heroin inside. It just means that none of it ended up on the outside of the bag. Maybe that’s because it’s well wrapped up or the materials have simply washed off. Or, more likely in the case of a real attacker, they’ve just strapped the dangerous stuff to their body and there’s no reason it would show up on the outside of the bag.

Or when the alarm goes off, perhaps it doesn’t mean anything at all is going on. False positives can result from heart medication or because you’ve worked with fertilizer. I’ve had it happen myself when going through the TSA checkpoint, though in that case they moved to another machine and a supervisor began fiddling with the one that had alarmed. I presume he was recalibrating it since I didn’t set off the new one and am not writing this from Guantanamo.

Lastly, there’s plenty of things that could be in that bag that wouldn’t set off an explosive residue detector if they hadn’t been fired in its presence. Things it would have been perfectly legal to take on with you at the Braddock metro so long as you got off before crossing the Potomac.