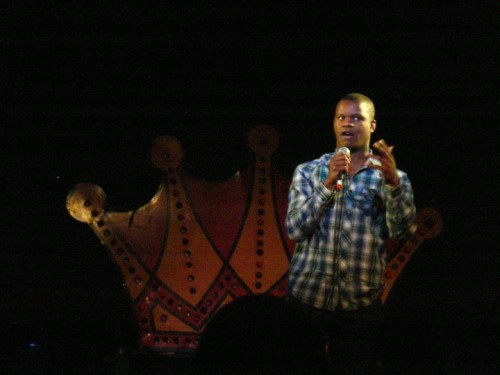 I spent a rainy Sunday afternoon at the Columbia Heights Coffee House chatting with Reggie Melbrough, because he is a DC comic you need to know about. He grew up in Boise, Idaho and moved to the nation’s capital in March of 2007. He teaches U.S. History by day, but at night, or at least four to five nights of the week, he is on the streets seeking to help the rigid and stiff everyday man with his stand up comedy, because “Everyone deserves to laugh.”

Melbrough got the idea of performing standup comedy after his grandmother died. “I had an inkling to try it, but didn’t know how to do it,” he says, so he wrote down three pages of random stories and thoughts and sent it to a friend who was already performing. The friend told him, “You have about three minutes of material here.”

His friend taught him that comedy is hard, but that didn’t stop him from stepping into the spotlight for the first time at the Hotel Topaz bar and he has been staying true to the craft for a little over a year. “Every day I spend fifteen minutes writing before I go to work.” He also carries a notebook and voice recorder with him at all times. “You have to train your mind and body: write, get up [on stage]; write, get up.” He admits that he sucks at going back at what he’s written and needs to spend more time “finding the funny shit.”

Reggie Melbrough and Mike Curran, 20, decided at a party to have their own comedy show before Melbrough was even performing. Three months later he found himself learning how to be a performer as well as manage them. “You have to put performers in blocks.” He went on to describe that you put your A and B comics, which have the strongest performance abilities, at the beginning and middle and close with the C’s, which are lesser known. Or infamous. He emphasizes running with whatever spot you find yourself performing in and concentrating on making the people in front of you laugh. Originally their show was going to be on Wednesdays, but that did not work out because there are a lot of shows on that day. They decided to go with Monday and have had managed to keep a consistent show at the Looking Glass Lounge for a year. Their anniversary was in December of 2010.

Being a comic is not easy. “It’s like Caesar. You get the thumbs up or the thumbs down.” He went on to talk about the parallels of getting booed as a comic compared with musicians. “In music you can just do a cover, but in comedy you just get booed.” He refers to performing as his job and said that there is competition with other comics when it comes to getting spots to perform, but that everyone in the scene works as a brotherhood. Melbrough described comedy as a guilty pleasure, because “People are afraid to admit something is funny and let loose. The world is too serious and I’m very cynical because I teach U.S. history.”

Making light out of the dark helps him to lighten the mood. “People deserve to laugh.” He said that comedy is taken for granted and that people should “take some time and watch a stand up and get that good ole gut laugh.” Making people genuinely laugh is his drug and is what makes him want to do it more. “It’s like searching for the good high. That’s what I like about it. It makes you feel great to see their reaction. It’s genuine to see somebody laugh hearty. It’s an ego rush. It’s very two way. That’s what comedy is.”

You can link up with Reggie Melbrough on Facebook or catch him hosting the Looking Glass Comedy nights on the first Monday of each month for 2011 alongside Mike Curran. He told We Love DC that his upcoming showcases include the Eleventh Street Lounge in Clarendon on Jan. 13, the Alley Cat on Jan. 15, and the “Don’t Block the Box” showcase that will be happening at the Wonderland Ballroom Jan. 25, for $3 a person. His favorite place to perform is the Arlington Draft House on Saturdays.