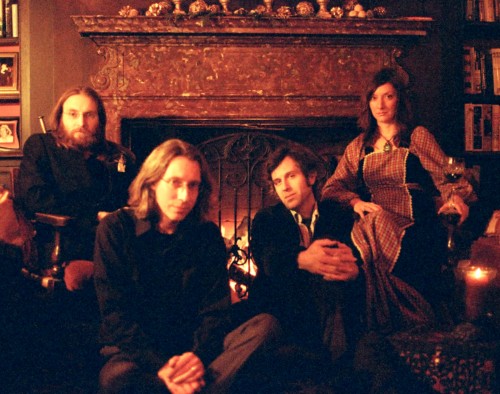 The back room is filling up at Comet Ping Pong in anticipation of two intriguing bands set to showcase their sound and songs. Ping Pong tables are being pushed aside to make way for the crowd as the rather confused method of having people go back and pay a cover charge takes place. Martin Bisi and band [correction: The Plums]* set up and go through the laborious sound check as everyone eagerly awaits the music. And this is a fine bill with the talented New York based producer/engineer Bisi leading a band that sound a bit like some of the bands he has worked with such as Sonic Youth and Swans followed by Fern Knight, an always interesting DC/Philadelphia band with wonderful psyche and folk elements in their songs.

It is a few minutes after eleven pm. I have been hanging out on this small commercial block on Connecticut for an hour and a half. Not being one to hang around bars, especially in crowded Saturday night bars like this, I perused the Politics & Prose bookstore until it closed at ten pm. Then, it is off to the club to watch ping pong and hoping some music would get going. And this is why I have avoided Comet Ping Pong shows in the past. I don’t mind staying up late, but I do mind starting my evening this late. If I don’t get out the house early enough, it is just too easy to stay home. And if I was off to the theater, I would be more in the mood to go home and not continue the artistic theme in a different venue. But this bill interested me, so here I am and finally the music begins.

Martin Bisi [correction: The Plums] went from sound check to some quiet adjustments to stage volume and feedback into their music in a manner where it was difficult to say where the song began. But it quickly went from a John Cage/Terry Riley sound through a quirky lof-fi Pere Ubu sound into full fledged psychedelic jamming that ultimately reminded me of local favorites, Kohoutek. When it really moved, there was some nice motortik style drumming and a rhythmic throb of guitars reminiscent of Hawkwind. There were three guitars going along with bass and drums, so it was loud and strong with some nice wailing guitar work. They were keeping it instrumental until the end when they added some rather meaningless barely audible vocals for a few seconds. Transitions were a bit awkward, but I could live with that as they did not waste any time retuning and chatting. They added some keyboards late in the set which was more of a rhythmic sound, as opposed to any real dexterous playing. And ultimately that is what it was all about – laying down a sound with power and conviction. I thought they were successful, but I have seen it done better with Kohoutek, Mogwai and the like. I would still say this was a nice 35 minute blast of sound.

Fern Knight eventually hit the stage with the biggest lineup I have seen from the band. Margaret Ayre is the mainstay with her lovely singing and cello playing. Also in the lineup are drums, bass, guitar, violin, and flute. And that combination of sounds is perfect for psychedelic folk music, which is pretty much what Fern Knight provided tonight. They had a nice drone quality and the band used dynamics well from lighter sounds to heavier psyche-rock moments. It was a bit of a Faun Fables meets Spirogyra (with more of a Mandy Morton vocal style rather than Barbara Gaskin). I also detected some of the folkier Amon Duul II at times which sounded great. They added some harp toward set’s end, so the ethereal, mystical sounds were only enhanced. On the downside, the sound was not always balanced very well with some instruments lost at times. I did like the guitarist’s wah-wah sounds coming from deep in the mix rather than powering things up front. It was a lovely effect. But then it ended. The 25 minute set was over and the night was done.

Although the music was solid and enjoyable, tonight, I have to say that I probably will not be headed back to this venue to often, which is a shame since they book some really good bands. But the late start, casual style, and really short sets do not make me anxious to come back. Keep in mind, I am very lazy and can walk to all the U Street area clubs, so it is very easy for me to pass up events at an even moderately inconvenient club like this. But I am sure I will give Comet another chance when they do produce another really exciting band. The bands tonight did deliver some fine music, even though as Fern Knight’s Margaret Ayre pointed out, “it is past my bedtime.”

* Editor’s Note: Thanks to Patrick who pointed out that Martin Bisi and band performed even later in the night after many people had left. David and company had in fact seen The Plums open the show.