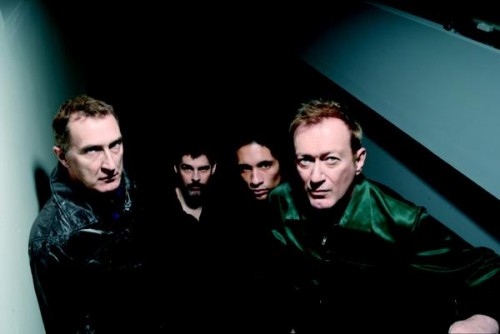 courtesy of Gang of Four.

In 2005, the return of Gang of Four felt vital. Playing to a packed 9:30 Club, touring in support of ‘Return the Gift’ on which they re-recorded most of their greats, the original Gang of Four roster played a blistering set that left us breathless and neck-sore from the sudden aural thrashing they gave us. The surprising vigor and fury that this 25-year old band played with in 2005 seemed to deliver a message to the droves of post-millennial-shift, post-punk pop revivalists that said “This is how its done”. Danceable rhythm and angular guitars amount to little substance without the spit and anger, the passion and snarl, the political outrage and razor sharp criticism. It was one of the best shows of the year.

In 2011, the return of Gang of Four feels somewhat unnecessary and yet it is welcome. Playing to a 3/4 full 9:30 Club on Wednesday night, touring in support of a strong new album ‘Content’, the reconstituted Gang of Four (featuring Jon King and Andy Gill with a new rhythm section) played an uneven set that entertained us and occasionally thrilled us but did not come close to the impact of their last reunion run. Part of the reason for this was the uneven mix of new songs and classics, part of it was the slightly off chemistry of the new line-up, and part of it was the fast and loose nature of the performance which lacked the ruthless reclaiming-the-title motivation of their 2005 shows. Even with the lumps though, this show was a fun one that offered enough highlights to make for a fine night of music and ended with a fantastic finale that finally tapped into some of that 2005 tour magic.

The set started off badly. There, I said it. When a band of this stature plays a show this late in its career, it is sort of an unwritten rule that most people are there to hear the classic songs. It is expected that you’re going to play some of your new material and in this case anticipated (the new album is quiet good), but to start the set with a new song runs the risk of turning off the crowd from the get go. Gang of Four began with “You’ll Never Pay For The Farm” which is one of the more mediocre tracks from the new album. I thought it was an odd choice as an opener, it lacks drama, even performed perfectly it wouldn’t grab attention like some of the other new tunes could (“Do As I Say” would have been just right). What really deep-sixed the opening of the show though was the sound mix combined with Jon King’s work on the microphone. His voice was so inaudible and spotty in the mix that it threatened to ruin the show. Really, it was that bad. You simply couldn’t hear him. It was slightly unnerving watching King gyrate and convulse with his mouth silently moving. I glanced around and saw several nervous expressions on other fans’ faces as the vocal problem carried over into the next two songs.

Thankfully, the instruments were pretty well sorted. Andy Gill’s guitar sounded as epic as ever and really carried the first two songs. The new rhythm section comprised of Thomas McNeice on bass and Mark Heaney on drums did a decent job up front and continued to do so through out the night. I will admit that some of the more sparse sections of songs sounded a little off to me. Like when the rhythm is bare bones under Gill’s laser guitar beams on ‘Not Great Men’, the ear could definitely tell the beat had a different flavor from when it was played by the original team. The bass lines didn’t sound as distinct as they used to be, with the edge of each note bleeding into the next. The drumming was spot-on but maybe wasn’t mic’d for full effect. Some of the quieter, weirder drum beats had little force and had to be amplified by audience clapping at times.

Song three, “Ether”, is where the show thankfully started to come together. King’s vocal issues were still there, but they were mitigated well by the sound booth. The poor sound engineer probably had his hand on King’s gain dial all night! King’s physical histrionics increased through-out the night, but now that they were accompanied by a voice you could actually hear they were a lot more entertaining. In addition to King’s vocals improving, we also got the first real dose of Andy Gill singing counter vocal. Gill is just too cool; on guitar he is a post-punk god and vocally his sing-talk style hypnotizes like some kind of Manchurian Candidate programmer.

They followed “Ether” with “I Parade Myself” off of their 90’s album ‘Shrinkwrapped’. I was sort of stunned to hear this song played live. With the wealth of classic material and the new album to cover, I never expected to hear a song off of their bemoaned 90’s comeback attempt record. Let alone for it to be the strut anthem of “I Parade Myself”. King really seemed to enjoy this one, hamming it up as he did a model runway walk along the stage. At other points in the night, Gill stood on speaker stacks, tore open his shirt, waved his arms around, and did an immensely entertaining electrocuted-crucifixion dance.

King and Gill are pretty intimidating fellows. King’s looks of outrage and madness menaced the crowd up front, while Gill just gazed out over the audience like he could kill us with the sound from his guitar whenever he wished. There was one point during “What We All Want” when Gill stood at the front edge of the stage, wrenching such jagged sounds out of his guitar, that I swear he could have cut off heads if he aimed them a little lower into the crowd.

As the band played, the set got better and better. It really felt like they were warming up as the went. By the middle of the set the show was at about half-speed. I think the tech difficulties but also the layout of the setlist created this feeling. There just was not a very good song flow in the first half. Highlights were “Paralyzed” and “Why Theory?”. The second half is when things really got interesting. From “We Live As We Dream, Alone” through the two encores, the band was on fire. They finally dropped their best new song “Do As I Say” and it fit right in with the two bulletproof classics that preceded it.

When the band returned for their first encore with “Return the Gift”, they played brilliantly. The encore thundered along with “Damaged Good”. Both of these songs were fantastic, played with the same awe-inspiring force and energy that the original line-up displayed in 2005. The audience was really on board by now, singing and clapping along, so the band returned for a second encore just as the house lights went up. They ripped through “At Home He’s A Tourist” to close out the night. It is unfortunate that it took the set so long to get to full speed because the final 6 songs were really special and left us all wanting more.

You’ll Never Pay For The Farm
Not Great Men
Ether
I Parade Myself
Paralyzed
A Fruitfly in the Beehive
Anthrax
What We All Want
I Party All The Time
Why Theory?
You Don’t Have To Be Mad
We Live As We Dream, Alone
To Hell With Poverty!
Do As I Say

Encore 2:
At Home He’s A Tourist