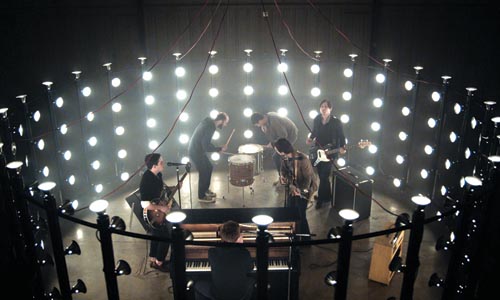 Sunday night might have belonged to the Oscars but those that stopped by Rock & Roll Hotel weren’t paying attention. White Rabbits were in town to end a week-long mini-tour of the northeast and showcased their dual (sometimes triple) percussion attack. The band is currently recording a new album and used the show to preview some of that material. It was a gutsy move (they could have easily lost their audience during those moments) but it paid off as the new songs sounded good and the band rewarded the audience’s patience with a strong finale to the whole affair.

At first, I wasn’t sure if R&R Hotel would be big enough to accommodate the Rabbits’ armory of drums, guitars, and an upright piano, but the venue was a good enough fit for the kinetic group and their beat-heavy sound. After setting up their own instruments (who needs roadies?), the band launched into a brand new song. I was surprised but pleased as the band played a steady rocker that reminded me a little of Spoon’s “The Mystery Zone”. The Spoon reference makes sense because of Britt Daniel’s influence on the group (he produced their last album, It’s Frightening). That and lead singer/piano player Stephen Patterson bares a striking resemblance to Daniel.

Overall, the band focused on newer material. They played 5 new songs, most of Frightening, and only 3 songs off of the debut album, Fort Nightly. I kind of looked at this as two different shows combined into one. The new songs stood out not only due to their unfamiliarity, but also because of the new sounds and ideas the band appears to be incorporating. A couple of songs featured programmed drum loops, adding even more rhythm to the sound. One song featured a synth that created a cool distorted effect. Another song featured a Motown-style beat and a catchy, off-kilter hook. They spaced the new material between the more familiar ones in a clever way but it’s obvious the audience was more receptive to what they knew. After the opening number, the band played spirited versions of “While We Go Dancing”, “The Salesman (Tramp Life)”, and “Lionesse”, the latter two really showcasing the twin-percussion attack led by drummers Matt Clark and Jamie Levinson. They were not only the most energetic members of the group, but they also appeared to play harder and louder as the show progressed. Being a big fan of the drums, I was not disappointed by the duo. Patterson’s rhythmic piano-playing was also well on display and used to great effect during the middle section breakdown of “Midnight And I” where he played the slow, cascading riff note-for-note alongside the guitar.

After a few new songs, though, I got the feeling the audience was a little antsy for some familiar Rabbits tunes. We got it with an even more uptempo version of “The Plot”. Although the earlier portion of the set had its moments, the band found its second wind starting with “Plot”. The shaking tambourines, staccato-ed guitar/piano chords, and memorable chorus (featuring some nice vocal harmonies by guitarist Greg Roberts) really got the audience excited for what was next. And that was “Percussion Gun”. This is my favorite Rabbits song and the opening Burundi-style drums sounded epic in the tiny club. I was amazed watching the two drummers lock-step with each other and pouring every ounce of energy into their performance. They followed “Gun” with a spirited version of “Rudie Fails” to close the main set and it seemed as if the drums had gotten even louder. For the encore, the band launched into “Right Where They Left You” along with its African rhythms and ringing notes that dovetailed perfectly into “Kid On My Shoulders”. The drummers, now joined by bassist Adam Russell, sounded like they were on steroids as Patterson pounded the crap out of his piano while playing the main three-note riff. The three drummers engaged in a calypso-meets-tribal dance that ended the show with a bang.

Leaving R&R Hotel, I was pleased with the overall performance. White Rabbits left everything on stage, displaying great energy and solid chops. While the band really picked things up in the final quarter of the set, the new songs provided a nice preview of what I’m expecting to be another quality album. Overall, an enjoyable evening and no long acceptance speeches were necessary.

Just like the rapper Oddisee, born in DC and raised in Maryland. Spent several years at College Park pretending to study before joining a non-profit. Plays a few instruments, was in two garage bands, has a MySpace artist page, and is now attempting to create a successful accordion-punk outfit. If you happen to be in Dupont, you may find him browsing the stacks at Kramer’s or looking for CDs at Melody Records. Loves the Redskins even though they break his heart every year and is hoping they move back to the city so he can save $40+ on parking/gas when going to the games.

See Arjun's RSS Feed More By Arjun
Just like the rapper Oddisee, born in DC and raised in Maryland. Spent several years at College Park pretending to study before joining a non-profit. Plays a few instruments, was in two garage bands, has a MySpace artist page, and is now attempting to create a successful accordion-punk outfit. If you happen to be in Dupont, you may find him browsing the stacks at Kramer's or looking for CDs at Melody Records. Loves the Redskins even though they break his heart every year and is hoping they move back to the city so he can save $40+ on parking/gas when going to the games.