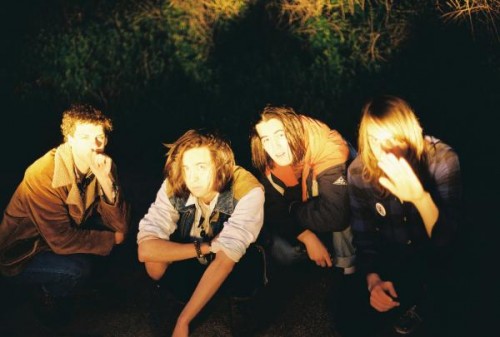 It was another sold out show at Rock & Roll Hotel on Friday night as the club continued its recent run of strong indie buzz-band bookings with Chicago’s Smith Westerns. Between the sold-out show downstairs and the mega-popular DJ night upstairs, there was actually quite a long line to gain entry to the club. As I stood in the pleasant evening air, waiting to get inside, I could not help but overhear the chorus of whining from the privileged and entitled who felt put-out by having to wait in a line for 10-15 minutes. I didn’t hear a single person talking about the band most of us were there to see.* This was a bad sign that foretold of an audience more interested in talking rather than in actually listening to the music we had paid to see.

Once inside, the audience did indeed talk through most of the opening set by O.M.U., which is a shame because they are a fun band with some pretty great guitar playing. Duing Smith Westerns’ set, the drunken crowd switched from talking to sloppily singing along. This was a welcome change in audience behavior and indicated Smith Westerns’ surprising mainstream appeal. Their set was a mix of inventive indie-rock and platitude-filled, teen romance anthems. While I enjoyed the majority of their set, I was left with the distinct impression that Smith Westerns are a band at a crossroads.

Smith Westerns’ sophomore album “”Dye It Blonde” is a special album. It has a magical quality to it that I find instantly uplifting. It is the kind of fuzz-wrapped, anthemic pop that puts a smile on my face but can equally serve as a personal soundtrack to doomed-teen romance reminiscence. If I was in High School right now, this would probably be my favorite album for awhile. Which is fitting, because Smith Westerns themselves are just a few years removed from the passions and heartbreaks of High School themselves. So in a sense they are probably singing about what they know. It’s the music that they wrap around these rather common tales that really takes their album to the next level. It is an expertly produced record that blows away their debut and promises greatness from this young band. Perhaps a greatness that is not actually there? Only one way to find out.

I was pretty excited for Friday night’s show because I wanted to see Smith Westerns in action. I wanted to hear the “Dye It Blonde” songs played live, in a club, with minimal production help. I also hoped that the band would meet the hype head on and justify their momentary ‘it’ band status. The show that they delivered at the Hotel proved that Smith Westerns are a capable band that could still use a lot of development. They powered through their rather short set with minimal breaks and denied the audience an encore. A move that did not seem justified (unlike when The Wedding Present does it after leaving every ounce of blood and sweat in them on stage) but rather because the band had nothing legit left to offer.

Smith Westerns live show seemed to be centered around two things. Almost every song contained a monster guitar riff or a swelled up, sing a-along chorus. On their albums these parts come across as great moments but are by no means a song’s sole highlight. At the show however, there were times when it felt that the band were plowing through just to reach the part where they ignite the monster riff or chorus. The audience loved it each time they unleashed one or both of these elements and for the most part I did too. I just wished that they had come with better context rather than from out of nowhere.

The set started out extremely strong and for about three songs, I was feeling like I was at a really special show. There is no denying the awesomeness of “Stil New”, “Dreams”, and “Imagine Pt.3”. At times Smith Westerns recalled Teenage Fanclub and (electric) Matthew Sweet. But then the set began to wear itself out. When they want to, they can really crank out a fascinating range of layered electric guitar sounds surrounding emotionally honest lyrics. But as the band kept the energy level up but their songs’ reliance on the big guitar explosion or ‘oooo oooo oooo’ choruses became painfully obvious.

It was the second half of the set where Smith Westerns felt less like indie-rock’s finest and more like they wanted to be Weezer. “Be My Girl”, “Smile”, and most of all “Tonight” were extremely popular with an audience who for most of the night had been more interested in talking and beeing seen than in listening to music (typical for sold-out R&R crowds of late). It was here that I really got the sense that Smith Westerns are at a crossroads as a band. They will either continue down the path of sonic invention or they will embrace their new found popularity and march into mediocrity.

* Does anyone else remember occasionally having to wait an eternity to enter the old 9:30 Club, but not really minding because of all the good music conversation that used to happen in line? Those were the days.