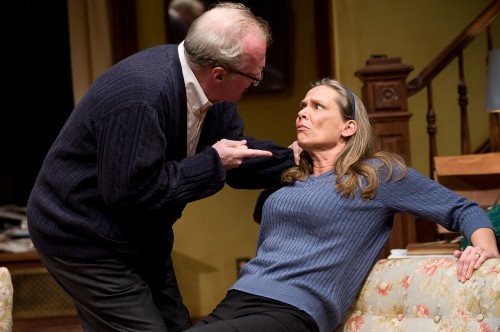 We’ve all had those nights we don’t want to end, when the party moves down the street into the afterhours, only to sputter out around dawn when guests blearily enter back into reality. Sometimes those parties are wildly beautiful, other times they are the stuff of nightmares. Friendships implode, relationships fracture – the whole evening becomes a nuclear bomb which leaves you shaking at the end, repeating to the empty space, “What the hell just happened?”

You could say I’m familiar with those kinds of nights. Which is why I spent most of the three hours at George and Martha’s afterhours alternately laughing and crying in recognition of the ultimate power struggle party. Since its Broadway premiere in 1962, Who’s Afraid of Virginia Woolf has continued to shatter audiences with the ugly truth – we’re all capable of total war in relationships. Some of us may even relish it.

Presented by Chicago’s brilliant Steppenwolf Theatre Company as part of Arena Stage’s Edward Albee Festival, this production is simply not to be missed. There’s a complete dedication to the realism of Albee’s script that makes everything passionately alive, from Todd Rosenthal’s tired living room set, crowded with books and booze, to the acting master class delivered by Tracy Letts and Amy Morton. That dedication sucks the audience in and makes us all culpable. You’ll feel dirty afterwards, like a host surveying the piles of empty bottles and broken glass.

Don’t let that stop you from joining this party. From “Hump the Hostess” to “Get the Guests,” it may be a night in a Machiavellian mine field, but it’s also hilarious. 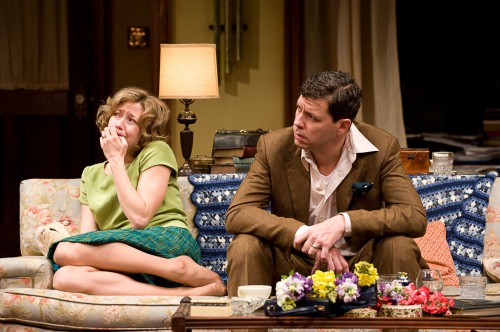 In the aptly named town of New Carthage, history professor George (Tracy Letts) and his wife Martha (Amy Morton) endure the boring drone of a sleepy New England college town. Both are far too intelligent for the usual games of academic ladder-climbing, which they begrudgingly engage in, like Olympian gods forced to play beer pong. Martha’s Daddy is the head of the college and the bane of George’s existence, but he must be obeyed. So when he asks his daughter to entertain the new biology professor Nick (Maddison Dirks) and his vapid wife Honey (Carrie Coon), she obliges for the ultimate afterhours party.

Maybe she goes a little too far. But, everyone does. The plot is filled with the cruel games bored people play when fueled by alcohol, resentment and contempt. Director Pam McKinnon’s great achievement here is in making these games seem almost Grecian in their power and inevitability. There’s nothing petty about George and Martha’s sparring here – the battle is essential, elemental – and McKinnon never loses sight of the sense that however nasty the feud gets, this is a couple perfectly matched in wit, audacity and intelligence. The tragedy is that their only outlet for those talents is destruction.

You might not think this would make for a hilarious evening, but the rapid-fire exchanges as Letts and Morton gun each other down make for some truly funny moments. As the younger couple treading water around them, Dirks and Coons are equally committed. Coons is especially effective as the sweetly idiotic wife Honey, with her kooky interpretive dance and green-faced vomiting. Dirks’ callow Nick balances out Letts’ erudite burn as George, and Letts’ take on George is already being discussed as award-worthy. He brims with mischief, full of jaded resignation, and though honestly he just wants to go to bed, he’s going to play to win at any cost. His belief in the inevitability of history demands nothing less.

Morton rules over all, maintaining an imperious vulgarity until almost the bitter end. Her performance is a painful mixture of dreadful coarseness and aching need, a woman with no purpose. When she silences Nick with a dismissive hand gesture, you know with chilling certainty that to George and Martha, the young couple is simply fodder for the cannon. And when she faces off with Letts, the energy is magnetic and repulsive. Yet, somehow there is love here as well. To create such a natural, multi-layered history as these two actors do is an incredible feat.

My main issue with Who’s Afraid of Virginia Woolf has always been the **spoiler**. Not that it exists, which is a potent moment of theater revelation, but Albee’s use of it as a metaphor within a relationship. But I realized after seeing the play with a friend who was coming to it for the first time, that it’s best left undiscussed. So I won’t get into it here. Let’s just see if you can handle three grueling hours of intense, hilarious cruel truth with George and Martha, and then let me know what you think.

One thought on “We Love Arts: Who’s Afraid of Virginia Woolf?”