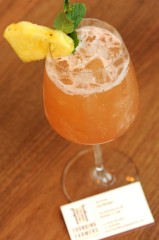 As Jenn posted at the beginning of the week the Cocoran’s annual fundraiser ARTINI 2011 is underway. Each of the twelve participating bars have a created a special cocktail inspired by works from the Cocoran’s collection which are on offer leading up to the April 2nd gala.

Throughout March, each bar gets one “feature night” when their creation is showcased and a portion of the proceeds is donated to the Corcoran – though the drink continues to be available the entire month. Because the We Love DC drinks team loves both drinks and art, we are especially enthusiastic about this project and will be using the Friday Happy Hours to recap the “feature nights” of each week.

The Week One contestants (and there is a competition element to this, too, after all): SEI Restaurant|Lounge, Farmers & Fishers, and Mie N Yu.

For SEI, Arris Nobel took his inspiration from John Singer Sargent’s 1878 painting “En route pour la pêche (Setting Out to Fish)” to create a cocktail he named “Fenêtre de Cancale (Window of Cancale).” The painting Tiger and Snake by Eugène Delacroix – and, evidently, another, more recent piece – inspired Jon Arroyo’s creation for Farmers & Fishers, “Harold and Maude.” (It is the Harold and Maude which is pictured above.)

The most modern inspiration for a drink was at Mie N Yu, where Rob Tinney mixed “Fifth Ave, N.Y.C. Punch” to match a photograph from the Cocoran’s current exhibition Richard Gordon: Meta Photographs – Fifth Avenue, N.Y.C., 1973-1978. This piece seems like the most difficult to derive cocktail inspiration from – a stark, black and white photo, from a series that challenges viewers to examine the role of the subject and photographer so I am feeling a twinge of bias toward Tinney for taking it on.

I was only able to sample one of the three this week – at SEI. The Fenêtre de Cancale seemed to fit with the modern Asian-fusion flavors I noticed on the rest of the food and drink menu. Based on house-infused lemongrass vodka, the drink was bright and lemony, though also rather sweet. It was topped with a froth of what I believe I was told was coconut-absinthe foam, though I only detected a hint of absinthe and do not recall any strong note of coconut at all. As for reference to the painting, I think I can see this sunny, lemonade-ish drink as something suitable for Sargent’s women on the beach under blue skies, albeit under cheerier circumstances than their faces might suggest.